Not to be confused with the Celtic Cumbric language 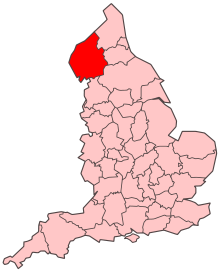 Location of Cumbria within England.

The Cumbrian dialect is a local English dialect spoken in Cumbria in northern England, not to be confused with the extinct Celtic language Cumbric that used to be spoken in Cumbria. As in any county, there is a gradual drift in accent towards its neighbours. Barrow-in-Furness (within the historic boundaries of Lancashire) has a similar accent to much of Lancashire whilst the northern parts of Cumbria have a more North-East English sound to them. Whilst clearly being an English accent approximately between Lancashire and Geordie it shares much vocabulary with Scots.

'Cumbrian' here refers both to Cumbria and also to Cumberland, the historic county which, along with Westmorland, has formed the bulk of Cumbria since the enactment of local government re-organisation in 1974. There is a Cumbrian Dictionary of Dialect, Tradition and Folklore, which was written by William Rollinson, but is much harder to find a copy of than the respective dictionaries for Lancashire and Yorkshire.

Despite the modern county being created only in 1974 from the counties of Cumberland, Westmorland and north Lancashire and parts of Yorkshire, Cumbria is an ancient land. Before the arrival of the Romans the area was the home of the Carvetii tribe, which was later assimilated to the larger Brigantes tribe. These people would have spoken Brythonic, which developed into Old Welsh, but around the 5th century AD, when Cumbria was the centre of the kingdom of Rheged, the language spoken in northern England and southern Scotland from Lancashire and Yorkshire to Strathclyde had developed into a dialect of Brythonic known as Cumbric (the scarcity of linguistic evidence, however, means that Cumbric's distinctness from Old Welsh is more deduced than proven). Remnants of Brythonic and Cumbric are most often seen in place names, in elements such as caer 'fort' as in Carlisle, pen 'hill' as in Penrith and craig 'crag, rock' as in High Crag.

The most well known Celtic element in Cumbrian dialect is the sheep counting numerals which are still used in various forms by shepherds throughout the area, and apparently for knitting. The word 'Yan' (meaning 'one'), for example, is prevalent throughout Cumbria and is still often used, especially by non-speakers of 'received pronunciation' and children, e.g. "That yan owr there," or "Can I have yan of those?"

The Northern subject rule may be attributable to Celtic Influence.

Before the 8th century AD Cumbria was annexed to English Northumbria and Old English began to be spoken in parts, although evidence suggests Cumbric survived in central regions in some form until the 11th century.

A far stronger influence on the modern dialect was Old Norse, spoken by Norwegian settlers who probably arrived in Cumbria in the 10th century via Ireland and the Isle of Man. The majority of Cumbrian place names are of Norse origin, including Ulverston from Ulfrs tun ('Ulfr's farmstead'), Kendal from Kent dalr ('valley of the River Kent') and Elterwater from eltr vatn ('swan lake'). Many of the traditional dialect words are also remnants of Norse settlement, including beck (bekkr, 'stream'), laik (leik, 'to play'), lowp (hlaupa, 'to jump') and glisky (gliskr, 'shimmering').

Old Norse seems to have survived in Cumbria until fairly late. A 12th century inscription found at Loppergarth in Furness bears a curious mixture of Old English and Norse, showing that the language was still felt in the south of the county at this time, and would probably have hung on in the fells and dales (both Norse words) until later.

Once Cumbrians had assimilated to speaking English, there were few further influences on the dialect. In the Middle Ages, much of Cumbria frequently swapped hands between England and Scotland but this had little effect on the language used. In the nineteenth century miners from Cornwall and Wales began relocating to Cumbria to take advantage of the work offered by new iron ore, copper and wadd mines but whilst they seem to have affected some local accents (notably Barrow-in-Furness) they don't seem to have contributed much to the vocabulary.

One of the lasting characteristics still found in the local dialect of Cumbria today is an inclination to drop vowels, especially in relation to the word "the" which is frequently abbreviated. Unlike the Lancashire dialect, where 'the' is abbreviated to 'th', in Cumbrian (as in Yorkshire) the sound is harder like the letter '?' or simply a 't' and in sentences sounds as if it is attached to the previous word, for example "int" instead of "in the" "ont" instead of "on the".

Another common addition to words is the letter y... Cumbrians often change the way a word spelt and sounded by adding a y as in byat = boat; cyak = cake.

Cumbria is a large area with several relatively isolated districts, so there is quite a large variation in accent, especially between north and south or the coastal towns. There are some uniform features that should be taken into account when pronouncing dialect words.

When certain vowels are followed by the glides /ɹ/ or /l/, an epenthetic schwa [ə] is often pronounced between them, creating two distinct syllables:

The pronunciation of moor and poor is a traditional feature of Received Pronunciation but is now associated with some old-fashioned speakers. It is generally more common in the north of England than in the south. The words cure, pure, sure may be pronounced with a triphthong [ɪuə].

Most consonants are pronounced as they are in other parts of the English speaking world. A few exceptions follow:

<g> and <k> have a tendency to be dropped or unreleased in the coda (word- or syllable-finally).

<h> is realised in various ways throughout the county. When William Barrow Kendall wrote his Furness Wordbook in 1867, he wrote that <h> 'should never be dropped',[1] suggesting the practice had already become conspicuous. It seems the elision of both <h> and <t> began in the industrial towns and slowly spread out. In the south, it is now very common.

<r> is realised as [ɾ] following consonants and in word-initial position but is often elided in the coda, unless a following word begins with a vowel: ross [ˈɾɒs]; gimmer [ˈɡɪmə]; gimmer hogg [ˈɡɪməˈɾɒɡ].

<t> is traditionally always pronounced as a voiceless alveolar plosive, although in many places it has been replaced by the glottal stop [ʔ] now common throughout Britain.

Finally, in some parts of the county, there is a tendency to palatalize the consonant cluster <cl> in word-initial and medial position, thereby rendering it as something more closely approaching [tl]. As a result, some speakers pronounce clarty (muddy) as [ˈtlaːtɪ], "clean" as [ˈtliːn], and in some cases "likely" and "lightly" are almost indistinguishable.

Unstressed initial vowels are usually fully realised, whilst those in final syllables are usually reduced to schwa [ə].

Barrow-in-Furness is unique within Cumbria and the local dialect tends to be more Lancashire orientated. Like Liverpool this is down to the large numbers of settlers from various regions (including predominantly Scotland, elsewhere in England and Ireland amongst other locations). In general the Barrovian dialect tends to drop certain letters (including h and t) for example holiday could be pronounced as 'oliday, and with the drop of the h there is more emphasis on the letter o. Another example is with the letter t where twenty is often pronounced twen'y (again an emphasis on the n could occur).

The Cumbrian numbers, often called 'sheep counting numerals' because of their (declining) use by shepherds to this very day, show clear signs that they may well have their origins in Cumbric. The table below shows the variation of the numbers throughout Cumbria, as well as the relevant cognate in Welsh, Cornish and Breton, which are the three geographically closest British languages to Cumbric, for comparison.

NB: when these numerals were used for counting sheep, reputedly, the shepherd would count to fifteen or twenty and then move a small stone from one of his pockets to the other before beginning again, thus keeping score. Numbers eleven, twelve etc. would have been 'yandick, taendick', while sixteen and seventeen would have been 'yan-bumfit, tyan-bumfit' etc.

Although yan is still widely used, wan is starting creep into some sociolects of the area.

There were several villages in Cumbria that were used during the Survey of English Dialects to minutely detail localised dialects. At the time, Cumbria did not exist as a unit of local government; there were 12 sites within modern Cumbria spread across four different counties:

The following poets are known for writing about the area: