Oleg Antonovich Gordievsky (Russian: Олег Антонович Гордиевский), CMG (born 10 October 1938 in Moscow, Russian SFSR, Soviet Union), is a former Colonel of the KGB and KGB Resident-designate (rezident) and bureau chief in London, who was a secret agent of the British Secret Intelligence Service (MI6) from 1974 to 1985.

Oleg Gordievsky attended the Moscow State Institute of International Relations, and on completion of his studies, joined the foreign service where he was posted to East Berlin in August 1961, just prior to completion of the Berlin Wall. He joined the KGB in 1963, and was posted to the Soviet embassy in Copenhagen, Denmark.

During his Danish posting, Gordievsky became disenchanted with his work in the KGB, particularly after the Soviet invasion of Czechoslovakia in 1968 – and made his sentiments known to MI6, who subsequently made contact with him. The value of MI6's recruitment of such a highly-placed and valuable intelligence asset increased dramatically when, in 1982, Gordievsky was assigned to the Soviet embassy in London as the KGB Resident-designate ("rezident"), responsible for Soviet intelligence gathering and espionage in the UK.

Two of Gordievsky's most important contributions were averting a potential nuclear confrontation with Soviet Union when NATO exercise Able Archer 83 was mis-interpreted by the Soviets as a potential first strike, and identifying Mikhail Gorbachev as the Soviet heir apparent long before he came to prominence. Indeed, the information passed by Gordievsky became the first proof of how worried the Soviet leadership had become about the possibility of a NATO nuclear first strike.[1]

Gordievsky was suddenly ordered back to Moscow on 22 May 1985, taken to a KGB safehouse outside Moscow, drugged and interrogated by Soviet counterintelligence. Apparently the leak came from two sources, one of which might have been Aldrich Ames, an American Central Intelligence Agency officer, who had been selling secrets to the KGB.

Gordievsky was questioned for about five hours. After that, he was released and told he would never work overseas again. Although he was suspected of espionage for a foreign power, for some reason his superiors decided to stall. In June 1985 he was joined by his wife and two children in Moscow.[citation needed]

Although he almost certainly remained under KGB surveillance, Gordievsky managed to send a covert signal to MI6 about his situation, and they reactivated an elaborate escape plan which had been in place for many years, ready for just such an emergency.[citation needed]

On 19 July 1985, Gordievsky went for his usual jog, but he instead managed to evade his KGB tails and boarded a train to the Finnish border, where he was met by British embassy cars and smuggled across the border into Finland, then flown to England via Norway. Soviet authorities subsequently sentenced Gordievsky to death in absentia for treason,[2] a sentence never rescinded by post-Soviet Russian authorities. His wife and children – on holiday in Azerbaijan at the time of his escape – finally joined him in the UK six years later, after extensive lobbying by the British Government, and personally by Margaret Thatcher during her meetings with Gorbachev.[citation needed]

Life in the UK 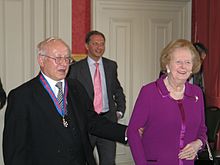 Gordievsky congratulated by Baroness Thatcher on his investiture, 18 Oct 2007

Gordievsky noted that the KGB were puzzled by and denied the claim that Hollis was a Soviet agent.

In 1990, he was consultant editor of the journal Intelligence and National Security, and he worked on television in the UK in the 1990s, including the game show Wanted.[3] In 1995 the former British Labour Party leader Michael Foot received an out of court settlement (said to be "substantial") from The Sunday Times after the newspaper alleged, in articles derived from claims in the original manuscript of Gordievsky's book Next Stop Execution (1995), that Foot was a KGB "agent of influence" with the codename 'Boot'.[4] In The Daily Telegraph in 2010 Charles Moore gave a "full account", which he claimed had been provided to him by Gordievsky shortly after Foot's death, of the extent of Foot's alleged KGB involvement. Moore also wrote that, although the claims are difficult to corroborate without MI6 and KGB files, Gordievsky's past record in revealing KGB contacts in Britain had been shown to be reliable.[5]

On 26 February 2005, he was awarded an Honorary Degree of Doctor of Letters by the University of Buckingham in recognition of his outstanding service to the security and safety of the United Kingdom.[6]

Gordievsky had a letter published in the Daily Telegraph on 3 August 2005, accusing the BBC of being "The Red Service". He said:

"Just listen with attention to the ideological nuances on Radio 4, BBC television, and the BBC World Service, and you will realise that communism is not a dying creed."

Gordievsky was featured in the PBS documentary Commanding Heights: The Battle for the World Economy.

Gordievsky was appointed Companion of the Most Distinguished Order of St Michael and St George (CMG) for "services to the security of the United Kingdom" in the 2007 Queen's Birthday Honours (in the Diplomatic List).[7] The Guardian newspaper noted that it was "the same gong given his fictional cold war colleague James Bond."[8]

In April 2008, the media reported that on 2 November 2007, Gordievsky had been taken by ambulance from his home in Surrey to a local hospital, where he spent 34 hours unconscious.[9] Gordievsky claimed that he was poisoned with thallium by "rogue elements in Moscow".[9] He accused MI6 of forcing Special Branch to drop its early investigations into his allegations;[9] according to him, the investigation was only reopened thanks to the intervention of former MI5 chief Eliza Manningham-Buller.[10]

In Gordievsky's opinion, the villain was a UK-based Russian business associate who had supplied him with pills, which he said were the sedative Xanax, purportedly for insomnia; he refused to identify the associate, saying British authorities had advised against it.[11]