The Book of the City of Ladies

The Book of the City of Ladies 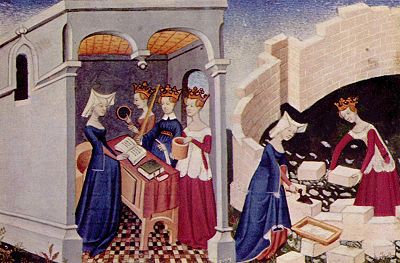 Picture from The Book of the City of Ladies

The Book of the City of Ladies (1405), or Le Livre de la Cité des Dames, is perhaps Christine de Pizan's most famous literary work, and it is her second work of lengthy prose. Pizan uses the vernacular French language to compose the book, but she often uses Latinate syntax and conventions within her French prose. [1] The book serves as her response to Jean de Meun's The Romance of the Rose. Christine combats Meun's misogynist beliefs by creating an allegorical city of ladies. She defends women by collecting a wide array of famous females throughout history. These women are "housed" in the City of Ladies, which is actually Christine's book. As Christine builds her city, she uses each famous woman as a building block for not only the walls and houses of the city, but also as building blocks for her defense of female rights. Each woman added to the city adds to Christine's argument towards women as active participants in society. She also advocates for female and male equality within the realm of education.[2]

Part I opens with Christine reading from Matheolus’s Lamentations, a work from the thirteenth century that addresses marriage wherein the author writes that women make men’s lives miserable [3].Upon reading these words, Christine becomes upset and feels ashamed to be a woman: “This thought inspired such a great sense of disgust and sadness in me that I began to despise myself and the whole of my sex as an aberration in nature” [4]. The three Virtues then appear to Christine, and each lady tells Christine what her role will be in helping her build the City of Ladies. After this, Lady Reason is the first to join Christine and help her build the external walls of the city. Lady Reason is a virtue developed by Christine for the purpose of her book. Reason is the first virtue to help Christine build the city. Reason aids Christine in laying the foundations for her city and answers Christine's questions about why men slander women. As she helps Christine understand male slander, she also helps Christine to prepare the ground on which the city will be built. She tells Christine to “take the spade of [her] intelligence and dig deep to make a trench all around [the city] … [and Reason will] help to carry away the hods of earth on [her] shoulders.” These “hods of earth” are the past beliefs Christine has held about male slanderers. Christine, in the beginning of the text, believed that women must truly be bad because she “could scarcely find a moral work by any author which didn't devote some chapter or paragraph to attacking the female sex. [Therefore she] had to accept [these authors] unfavourable opinion[s] of women since it was unlikely that so many learned men, who seemed to be endowed with such great intelligence and insight into all things, could possibly have lied on so many different occasions.” Christine is not using reason to discover the merits of women. She believes all that she reads instead of putting her mind to listing all the great deeds women have accomplished. To aid Christine see reason, Lady Reason comes and teaches Christine. She helps Christine dispel her own self-consciousness and the negative thoughts of past writers. By creating Lady Reason, Christine not only teaches her own allegorical self, but also the readers. She gives not only herself reason, but also gives readers, and women, reason to believe that women are not bad creatures and have a significant place within society.

In Part II, Lady Rectitude says she will help Christine “construct the houses and buildings inside the walls of the City of Ladies” and fill it with inhabitants who are “valiant ladies of great renown” [5]. As they build, Lady Rectitude informs Christine with examples and “stories of pagan, Hebrew, and Christian ladies” [6] who possessed the gift of prophecy, chastity, or devotion to their families and others. Christine and Lady Rectitude also discuss the institution of marriage, addressing Christine’s questions regarding men’s claims about the ill qualities women bring to marriage. Lady Rectitude corrects these misconceptions with examples of women who loved their husbands and acted virtuously, noting that those women who are evil toward their husbands are “like creatures who go totally against their nature” [7]. Lady Rectitude also refutes allegations that women are unchaste, inconstant, unfaithful, and mean by nature through her stories. This part closes with Christine addressing women and asking them to pray for her as she continues her work with Lady Justice to complete the city.

Part III marks Lady Justice’s joining with Christine to “add the finishing touches” to the city, including bringing a queen to rule the city. Lady Justice tells Christine of female saints who were praised for their martyrdom. At the close of this part, Christine makes another address to all women announcing the completion of the City of Ladies. She beseeches them to defend and protect the city and to follow their queen. She also warns the women against the lies of men, saying, “Drive back these treacherous liars who use nothing but tricks and honeyed words to steal from you that which you should keep safe above all else: your chastity and your glorious good name”[8] .

Christine's main source for information was Giovanni Boccaccio's De mulieribus claris (On Famous Women). His text was a biographical treatise on ancient famous women. Christine also cited from Boccaccio's Decameron in the latter stages of The City of Ladies. The tales of Ghismonda and Lisabetta, for example, are quoted as coming from Boccaccio's Decameron. Christine may have read Boccaccio's De mulieribus claris in the French version Des Cleres et Nobles Femmes. Boccaccio's influence can be seen in Christine's stance on female education. In the tale of Rhea Ilia, Boccaccio advocates for young women's right to choose a secular or religious life. He states that it is harmful to place young girls into convents while they are “ignorant, or young, or under coercion.” Boccaccio states that girls should be “well brought up from childhood in the parental home, taught honesty and praiseworthy behavior, and then, when they are grown and with their entire mind know what of their own free will” choose the life of monasticism. Boccaccio believes that young girls need to be taught about life and virtues before they are consecrated to God. While he does not say women should have a formal education, he is still advocating for women to have a say in their lives and the right to be well informed about their possible futures. Therefore, Boccaccio's belief in educating young girls about secular and religious life could have acted as a stepping stone for Christine's belief in female education. Boccaccio’s text is mainly used for Parts I and II of the book, while Part III is more reliant upon Jean de Vignay’s Miroir historical (1333). This text is the French translation of the historical portions of Speculum Maius, an encyclopedia by Vincent of Beauvais that was begun after 1240 [9].

The Book of the City of Ladies is an allegorical society in which the word "lady" is defined as a woman of noble spirit, instead of noble birth. The book, and therefore the city, contains women of past eras, ranging from pagans to saints. The book includes discussion between Pizan and the three female Virtues which are sent to aid Christine build the city. These Virtues – Reason, Rectitude, and Justice – help Christine build the foundations and houses of the city, as well as pick the women who will reside in the city of ladies. Each woman chosen by the Virtues to live in the city acts as a positive example for other women to follow. These women are also examples of the positive influences women have had on society.

Pizan asks the virtues if women should be taught as men are and why men think women should not be educated. Other questions that are explored are: the criminality of rape, the natural affinity in women to learn, and their talent for government.