Progressive Muslims have produced a considerable body of liberal thought within Islam[1][2] or "progressive Islam" (Arabic: الإسلام التقدمي‎); but some consider progressive Islam and liberal Islam as two distinct movements[3]). The methodology of reform can be classified into two groups, one depending on re-interpreting the traditional texts which constitutes Islamic law (ijtihad);[4] this varies widely from little deviation from the traditional interpretation, to the more liberal which considers only the meaning of Qur'an as a divine inspiration, while the wording is believed to be from the prophet Muhammad intended by him to suit his time and situation, therefore interpreting the problematic verses in modern times allegorically or even not considering them. The second is questioning the authentic status applied to texts by the Traditional Islamic Scholars, resulting in the most liberal case as of the Qur'an Alone Muslims in rejecting the Islamic narratives of the sayings and practises of Prophet Muhammad, namely the Hadith completely.

Some liberal Muslims claim that they are returning to the principles of the early Ummah and to the ethical and pluralistic intent of their scripture, the Qur'an.[5] They distance themselves from some traditional and less liberal interpretations of Islamic law, as they consider these to be culturally based and without universal applicability. The reform movement uses monotheism (tawhid) "as an organizing principle for human society and the basis of religious knowledge, history, metaphysics, aesthetics, and ethics, as well as social, economic and world order."[6]

These are movements within Islam, rather than an attempt at schism. As such, they believe in the basic tenets of Islam, such as the Six Elements of Belief and the Five Pillars of Islam. They consider their views to be fully compatible with the teachings of Islam. Their main differences with more conservative Islamic opinion are two, the first is, in differences of interpretation of how to apply the core Islamic values to modern life,[7] the second includes a more reactionary dialectic which criticizes traditional narratives or even rejects them, hence, denying any obligation to follow them while also allowing greater freedoms in interpreting Qur'an regardless of the hadith.[8]

Over the course of the 19th and 20th centuries, in accordance with their increasingly modern societies and outlooks, liberal Muslims have tended to reinterpret many aspects of the application of their religion in their life in an attempt to reconnect with the original message, untouched by harmful cultural influences. This is particularly true of Muslims who now find themselves living in non-Muslim countries.[11]

Such people may describe themselves variously as liberal, progressive, or reformist (in application but not in the tenets of the faith); but rather than implying a specific agenda, these terms tend to incorporate a broad spectrum of views which contest conservative, traditional interpretations of Islam in many different ways. Although there is no full consensus amongst liberal Muslims on their views, they tend to agree on some or all of the following beliefs:

This means that liberal Muslims often drop traditional interpretations of the Qur'an which they find too culturally conservative and relative, preferring instead readings which are more adaptable to modern society (see ijtihad). Most liberal Muslims reject derivation of Islamic laws from literal readings of single Qur'anic verses. They generally claim that a holistic view which takes into account the 7th century Arabian cultural context allows deeper insight into the manner in which the commands of God (Allah) are carried out.

Moderate Islamic political thought contends that the nurturing of the Muslim identity and the propagation of values such as democracy and Human rights are not mutually exclusive, but rather should be promoted together.[12]

Most liberal Muslims believe that Islam promotes the notion of absolute equality of all humanity, and that it is one of its central concepts. Therefore, a breach of human rights has become a source of great concern to most liberal Muslims.[13] Though Human Rights is perceived to be of the utmost concern of all devoted adherents to the Islamic faith, liberal Muslims differ with their culturally conservative counterparts in that they believe that all humanity is represented under the umbrella of Human Rights. Many Muslim majority countries have signed international human rights treaties, but the impact of these largely remains to be seen in local legal systems.[14]

Muslim liberals often reject traditional interpretations of Islamic law, which allows Ma malakat aymanukum and Slavery. They see that Slavery opposed Islamic principles which they believe to be based on justice and equality and verses relating to slavery or "Ma malakat aymanukum" now can not be applied due to the fact that the world has changed.[15][16]

Within the framework of justice and equality for all, Muslim liberals include gay rights as a human right. 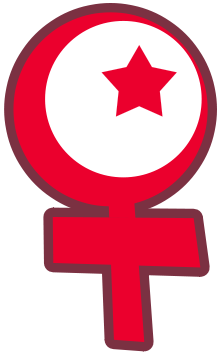 The place of women in Islam, traditional gender roles in Islam and Islamic feminism are likewise major issues.[17] For this reason, liberal Muslims are often critical of traditional Islamic law interpretations which allow polygyny for men but not polyandry for women, as well as the traditional Islamic law of inheritance under which daughters receive less than sons. Traditional Muslims believe this is balanced by the right of a wife to her husband's money, whereas the husband does not have a right to his wife's money.

It is also accepted by most liberal Muslims that a woman may lead the state, and that women should not be segregated from men in society or in masjids. Some traditional Muslims also accept a woman as a leader of state so long as it does not conflict with her obligation to family. A small minority of liberal Muslims accept that a woman may lead a mixed group in prayers, despite the established custom for women to pray behind or in a separate space. However, this issue remains controversial; see women as imams. Some Muslim feminists are also opposed to the traditional dress requirements for women (commonly called hijab), claiming that any modest clothing is sufficiently Islamic for both men and women.

Other Muslim feminists embrace hijab, pointing out its tendency to de-sexualize women and therefore assist them in being treated less as an object and more as a person. Furthermore, some Muslim feminists prefer to wear the hijab as an obvious sign that they are indeed Muslim, while also feminists. Most -but not all- schools of Islamic law require women to cover all but the hands and the face, while men are only required to cover from the navel to the knee. Traditional reports of the prophet, called hadith, are used to support the idea of covering everything on a woman except her face and hands. The reported story is told that the prophet saw Asma clothed in a thin garment, at which he proclaimed: "when a woman reaches the age of menstruation, she should cover everything but"- and he then pointed to his face and hands. The Qur'an itself requires men and women to dress modestly (see: Qur'an 24:30-31). The words "bosom/chest" and "modest" are found in 24:31, however the word "hair" is absent. In the same verse woman are advised to not "strike their feet" as to draw attention to their hidden adornment. This leaves "adornment" (sometimes translated as beauty) open to interpretation, as to whether it includes the hair.

Some liberal Muslims favor the idea of modern secular democracy with separation of church and state, and thus oppose Islam as a political movement.

The existence or applicability of Islamic law is questioned by many liberals. Their argument often involves variants of the Mu'tazili theory that the Qur'an was created by God for the particular circumstances of the early Muslim community, and reason must be used to apply it to new contexts.

Tolerance is another key tenet of Liberal Muslims, who are generally open to interfaith dialogue and conflict resolution with such communities as Jews, Christians, Hindus, and the numerous factions within Islam.

Liberal Muslims are more likely to reflect the idea of jihad in terms of the widely accepted "internal spiritual struggle" rather than an "armed struggle." The ideals of non-violence are prevalent in Liberal Muslim ideology and backed by Qu'ranic text; "permission to fight is given only to those who have been oppressed... who have been driven from their homes for saying, 'God is our Lord'" (22:39)

Liberal Muslims[who?] tend to be skeptical about the validity of Islamization of knowledge[citation needed] (including Islamic economics, Islamic science, Islamic history and Islamic philosophy) as separate from mainstream fields of inquiry. This is usually due to the often secular outlook of Muslim liberals, which makes them more disposed to trust mainstream secular scholarship. They may also regard the propagation of these fields as merely a propaganda move by Muslim conservatives.[18]

Quranists reject the hadith and follow the Quran only.