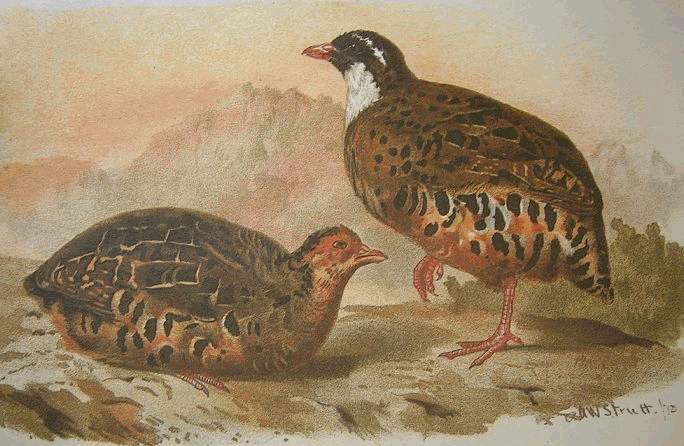 image_caption = Illustration from Hume and Marshall's Game birds of India.
regnum = ia
phylum = Chordata
classis = Aves
ordo =
familia =
genus = ""
species = "P. erythrorhyncha"
binomial = "Perdicula erythrorhyncha"
binomial_authority = (Sykes, 1832)The Painted Bush Quail ("Perdicula erythrorhyncha") is a species of found in the hill forests of . They move in small coveys on hillsides and are distinguished by their red bills and legs. They have a liquid alarm call and small groups will run in single file along paths before taking flight when flushed.

This quail is darkish brightly colored with a deep red bill and legs, eye-catching even in flight. The female has brick-red underpart and lacks the white throat and head stripe of the male. These quail are typically found in a covey of 6 to 10 birds. They come out in open grassy patches or on forest roads and cart tracks to feed and dust-bathe in the morning and evening. The covey quickly reunites by the constant call of the members to one another. The call consists of runs of soft whistle for rallying the scattered covey. The call is pleasant, oft-repeated triple note kirikee, kirikee, etc., by the cock in breeding season.

The nesting season varies locally, sometimes all year long. Nests are typically found in the ground at the root of a bush or grass clump, sometimes thinly lined with grass. The female lays 4 to 7 eggs at a time, which are incubated by the female for 16-18 days before hatching.