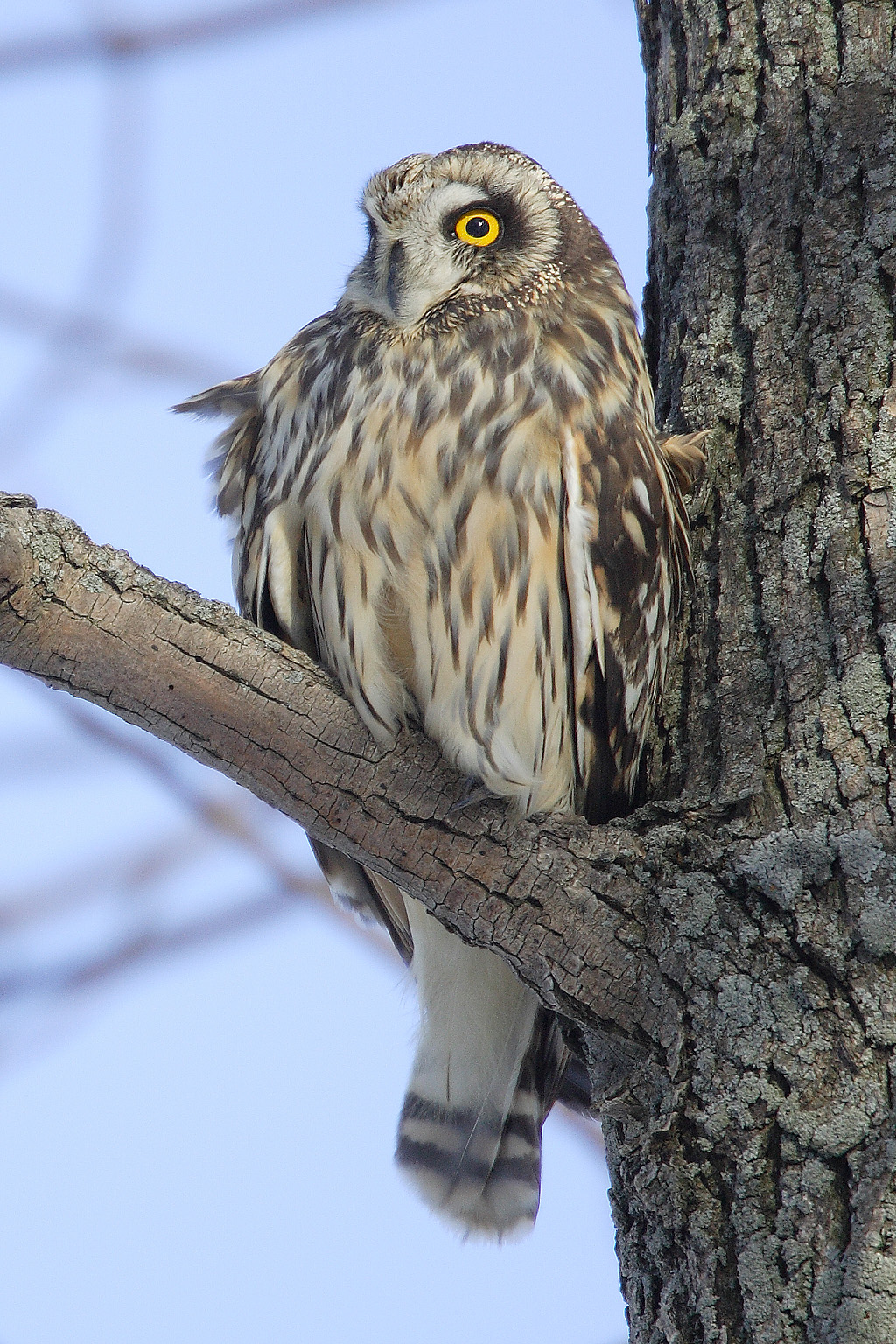 The Short-eared Owl ("Asio flammeus") is a species of (family ). Owls belonging to genus "" are known as the eared owls, as they have tufts of feathers resembling mammalian ears. These "ear" tufts may or may not be visible. "Asio flammeus" will display its tufts when in a defensive pose. However, its very short tufts are usually not visible. The Short-eared Owl is found in open country and grasslands. The word "flammeus" is for "flaming, or the color of fire". [http://www.owlpages.com/owls.php?genus=Asio&species=flammeus]

"Asio flammeus", the Short-eared Owl, is a medium-sized owl averaging 34–43 cm (13 to 17 inches) in length and weighing 206–475 grams (11 to 13 ounces). It has large eyes, big head, short neck, and broad wings. Its bill is short, strong, hooked and black. Its plumage is mottled tawny to brown with a barred tail and wings. The upper breast is significantly streaked (Alsop 2001). Wingspans range from 85 to 103 cm (38 to 44 inches). Females are slightly larger than males. The yellow-orange eyes of "A. flammeus" are exaggerated by black rings encircling each eye, and large, whitish disks of plumage surrounding the eyes like a mask.

The Short-eared Owl occurs on all continents except and ; thus it has one of the largest distributions of any bird. "A. flammeus" breeds in , , North and , the , and the . It is partially migratory, moving south in winter from the northern parts of its range. The Short-eared Owl is known to relocate to areas of higher rodent populations (Ehrlich 1988). It will also wander nomadically in search of better food supplies during years when populations are low. See a [http://www.birds.cornell.edu/AllAboutBirds/BirdGuide/Short-eared_Owl.html#fig1 map of the Short-eared Owl's distribution] across the .

It is listed as endangered in state. Its appearance at the on has prompted the to take the lead on ruling whether a massive redevelopment of the airport will receive the necessary environmental permits. [ [http://www.birds.cornell.edu/AllAboutBirds/BirdGuide/Short-eared_Owl.html All About Birds - cornell.edu] ]

The Short-eared Owl nests on the ground in prairie, tundra, savanna, or meadow habitats. Nests are concealed by low vegetation, and may be lightly lined by weeds, grass, or feathers (Ehrlich 1988). Approximately 4 to 7 white eggs are found in a typical , but clutch size can reach up to a dozen eggs in years when s are abundant. There is one per year. The eggs are incubated mostly by the female for 21–37 days. Offspring at a little over four weeks. This owl is known to lure predators away from its nest by appearing to have a crippled wing (Alsop 2001).

Sexual maturity is attained at one year. Breeding season in the northern hemisphere lasts from March to June, peaking in April. During this time these owls may gather in flocks. During breeding season, the males make great spectacles of themselves in flight to attract females. The male swoops down over the nest flapping its wings in a courtship display (Ehrlich 1988). These owls are generally .

Hunting occurs mostly at night, but this owl is diurnal and as well as . It tends to fly only feet above the ground in open fields and grasslands until swooping down upon its prey feet-first (Alsop 2001). Several owls may hunt over the same open area (Kaufman 2000). Its food consists mainly of , especially s, but it will eat other small s and some large s (Ehrlich 1988). Sometimes it even tends to eat smaller birds. Its flight is characteristically floppy due to its irregular wingbeats. The Short-eared Owl may also be described as "moth or bat-like" in flight. [http://www.dec.state.ny.us/website/dfwmr/wildlife/endspec/seowfs.html]