"Smoky Joe" played his first amateur baseball for the local miners teams in Ouray, Colorado though a native of Ness County, Kansas, Wood made his playing debut with the mostly-female "Bloomer Girls." There were many such teams across the country, which barnstormed in exhibition games against teams of men. Bloomer Girl rosters featured at least one male player.

After joining the Red Sox in 1908 at the age of 18, Wood had his breakthrough season in 1911 in which he won 23 games, compiled an earned run average of 2.02, threw a no-hitter against the St. Louis Browns and struck out 15 batters in a single game. Wood once struck out 23 batters in an exhibition game. He earned the nickname "Smoky Joe" because of his blazing fastball. Wood once said, "I threw so hard I thought my arm would fly right off my body."

His peers concurred. Legendary fastballer and pitching contemporary Walter Johnson once said, "Can I throw harder than Joe Wood? Listen, my friend, there's no man alive can throw harder than Smoky Joe Wood!" Reminded of Johnson's assessment sixty years later, Wood said, "Oh, I don't think there was ever anybody faster than Walter."[1]

On September 6, 1912, Wood faced off against Johnson in a pitching duel at Fenway Park. At the time, Wood had a 13-game winning streak and Johnson had recently had his own 14-game winning streak snapped. The papers of the time hyped the matchup like a heavyweight prize fight, and a standing-room-only crowd of 29,000 packed the park that day. Johnson and Wood duelled to a scoreless tie through five innings, when with two outs in the sixth, Boston's Tris Speaker doubled to left on a 1-2 count and Duffy Lewis knocked him in with a double down the right-field line. However, Wood gave up only two hits and the Red Sox prevailed, 1-0.[3] 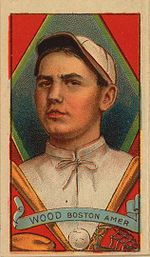 Equally compelling in drama, Wood's Red Sox faced John McGraw's New York Giants in the historic 1912 World Series. After slugging it out in seven close games, the teams met for the deciding game eight at Fenway with future Hall of Famer Christy Mathewson starting for the Giants. After Boston tied the score 1-1 in the bottom of the seventh, Wood came in to pitch. He matched Mathewson in the eighth and ninth, and the game went into extra innings. In the top of the tenth, Fred Merkle got to Wood knocking in a run with a single. But in the bottom of the tenth, Clyde Engle, pinch-hitting for Wood, hit an easy fly ball to Fred Snodgrass in center field, and Snodgrass dropped the ball. Given new life, the "Snodgrass Muff" cost the Giants as Speaker and Larry Gardner each knocked in a run to overcome the 1-run deficit. Wood and the Red Sox won the game 3-2 and the series 4-3-1. For Wood, the game was his third win in the series against one loss. He also struck out 11 batters in one game, becoming the first pitcher to record double-digit strikeouts in a World Series game.[4][5]

The following year, Wood slipped on wet grass while fielding a bunt in a game against the Detroit Tigers. He fell and broke his thumb, and pitched in pain for the following three seasons. Although he maintained a winning record and a low ERA, his appearances were limited as he could no longer recover quickly from pitching a game. Wood sat out the 1916 season and most of the 1917 season, and for all intents and purposes ended his pitching career.

Late in the 1917 season, Wood was sold to the Cleveland Indians, where he rejoined former teammate Tris Speaker. Always proficient with the bat, he embarked on a second career; like his former teammate Babe Ruth, Wood ended his career as an outfielder. His hitting statistics, however, were far more pedestrian than those of Ruth. Nonetheless, Wood finished in the top 10 in the American League in runs batted in in two seasons (1918 and 1922), and in 1918 he also finished in the top ten in home runs, doubles, batting average and total bases.[6] Wood pitched seven more times, all but one game in relief, winning none and losing one. He also appeared in four games in the 1920 World Series.

Wood finished his major league career after the 1922 season with a pitching record of 117-57 and an ERA of 2.03. His lifetime batting average was .283. In his final season with the Indians, he had his highest hit total for a season with 150, and also set a personal mark for RBI with 92.

Wood went on to become head baseball coach at Yale University, where he compiled a career managing record of 283-228-1 over 20 seasons. While at Yale, he coached his son Joe, who pitched briefly for the 1944 Red Sox.

Decades later, in 1981, Wood was present at a historic pitcher's duel between Yale University and Saint John's University, featuring future major leaguers Ron Darling and Frank Viola. Darling threw 11 no-hit innings for Yale, matched by Viola's 11 shutout innings for St. John's. Wood, sitting in the stands, recalled Ty Cobb and said, "A lot of fellows in my time shortened up on the bat when they had to--that's what the St. John's boys should try against this good pitcher." Darling lost the no-hitter and the game in the 12th, and Wood called it the best baseball game he had ever seen. The account was recorded in Roger Angell's 1982 book Late Innings, and, later, in the anthology Game Time: A Baseball Companion.

In 1984, Wood received a standing ovation on Old Timers Day at Fenway Park in Boston, some 72 years after his memorable season.[7] Aged 94, he said he was happy that Boston remembered him as "Smoky."

Wood died in West Haven, Connecticut on July 27, 1985.[8] He was buried in Shohola Township, Pennsylvania. In 1995, he was selected to the Boston Red Sox Hall of Fame.

In 1981, Lawrence Ritter and Donald Honig included him in their book The 100 Greatest Baseball Players of All Time. They explained what they called "the Smoky Joe Wood Syndrome," where a player of truly exceptional talent but a career curtailed by injury should still, in spite of not having had career statistics that would quantitatively rank him with the all-time greats, be included on their list of the 100 greatest players. Wood was also interviewed for Ritter's famous book, The Glory of Their Times.