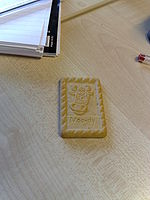 The malted milk is a type of biscuit, first produced by Elkes Biscuits of Uttoxeter (now owned by Fox's Biscuits) in 1924. They are named after their malt flavouring and milk content.

There are three main variations of the design which now varies from company to company. These are:

Variations include a chocolate covered single biscuit, as well as a custard cream like variety where two biscuits sandwich a vanilla-based cream.[1]