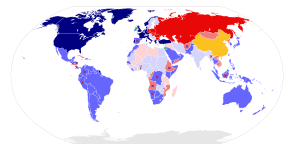 This period of the Cold War from 1979 to 1985 was a part of the Cold War when relations between the superpowers became worse, arising from the Soviet Invasion of Afghanistan. A corresponding change in Western policy from détente to more confrontational posture against the Soviets emerged, as US President Ronald Reagan and British Prime Minister Margaret Thatcher made clear their philosophical undertaking to counter Soviet expansionism in the developing world. There was a return to the costly arms race, with the issue of the stationing intermediate range nuclear missiles in Europe remaining unclear, and US proposals for the Strategic Defence Initiative introduced a new paradigm that threatened the equation of Mutually Assured Destruction. This phase of the Cold War ended shortly after Mikhail Gorbachev assumed leadership of the Soviet Union and demonstrated a clear commitment to reduce East-West tensions.

Led by heightened public awareness and fears, the period 1979-1985 witnessed the production in Western countries of several films and television dramas depicting the probable effects of a nuclear war and its aftermath. These included the ground-breaking American film The Day After (1983) and the British television docudrama Threads of the same year. Combining a contemporary Western youth culture of computer games and young love with fears of an accidental nuclear holocaust was the 1983 film WarGames. The films Red Dawn (1984) and Invasion U.S.A (1985), and the mini-series World War III (1982) played on American fears by portraying attacks by Soviet forces.

Films including The Spy Who Loved Me (1977), Moscow on the Hudson (1984), White Nights (1985) and Rocky IV (1985) also exploited contemporaneous tense Soviet-American relations. However many of these films conveyed a message that it was ultimately possible for both sides to breach their differences and work together.