Nikolaj Frederik Severin Grundtvig (September 8, 1783 – September 2, 1872) (Danish pronunciation: [ˈneɡolaɪ̯ˀ ˈfʁæˀðʁæɡ ˈsɛʋəʁin ˈɡʁɔndʋi]), most often referred to as simply N. F. S. Grundtvig, was a Danish pastor, author, poet, philosopher, historian, teacher, and politician. He was one of the most influential people in Danish history, as his philosophy gave rise to a new form of nationalism in the last half of the 19th century. He was married three times, the last time in his seventy-sixth year.

Grundtvig and his followers are credited with being very influential in the formulation of modern Danish national consciousness. It was steeped in the national literature and supported by deep spirituality.

Called Frederik rather than Nikolaj by those close to him, N. F. S. Grundtvig was the son of a Lutheran pastor, Johan Ottosen Grundtvig. He was brought up in a very religious atmosphere, although his mother also had great respect for old Norse legends and traditions. He was schooled in the tradition of the European Enlightenment, but his faith in reason was shaken by German romanticism and the history of the Nordic countries.[1]

In 1791 he was sent to live at the house of a pastor in Jutland, Laurids Feld, and studied at the Cathedral School of Aarhus from 1798 until he graduated. He left for Copenhagen in 1800 to study theology and was accepted to the University of Copenhagen in 1801.[2][3] At the close of his university life, Grundtvig began to study Icelandic and the Icelandic Sagas.

In 1805 Grundtvig took a position of tutor in a house on the island of Langeland. The next three years he used his free time to study writers Shakespeare, Schiller, Schelling and Fichte.[4] In 1802 his cousin, the philosopher Henrich Steffens, returned to Copenhagen full of the teaching of Schelling. His lectures and the early poetry of Adam Oehlenschläger opened Grundtvig's eyes to the new era in literature.[5] His first work, On the Songs in the Edda, attracted no attention.

Returning to Copenhagen in 1808, Grundtvig achieved greater success with his Northern Mythology, and again in 1809 with a long drama, The Fall of the Heroic Life in the North. Grundtvig boldly denounced the clergy of the city in his first sermon in 1810.[6] When Grundtvig published the sermon three weeks later it offended the ecclesiastical authorities, and they demanded him punished.[6][7]

In 1810 Grundtvig underwent a religious crisis and converted to a strongly held Lutheranism. He retired to his father's country parish in Udby as his chaplain.[8] His new-found conviction was expressed in his The First World Chronicle (Kort Begreb af Verdens Krønike i Sammenhæng) of 1812, a presentation of European history in which he attempted to explain how God is throughout human history and in which he criticized the ideology of many prominent Danes.[9][10] It won him notoriety among his peers and cost him several friends, notably the historian Christian Molbech.[10] Upon his father's death in 1813, Grundtvig applied to be his successor in the parish but was rejected.[11]

In the following years his rate of publication was staggering: aside from a continuing stream of articles and poems, he wrote a number of books, including two more histories of the world (1814 and 1817); the long historical poem Roskilde-Riim (Rhyme of Roskilde) (1813); and a book-sized commentary, Roskilde Saga.[12] From 1816 to 1819 he was editor of and almost sole contributor to a philosophical and polemical journal entitled Danne-Virke, which also published poetry.[9] 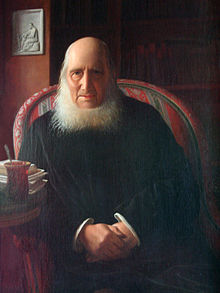 From 1813 to 1815, he attempted to form a movement to support the Norwegians against the Swedes. Later he preached on how the weakness of the Danish faith was the cause of the loss of Norway in 1814. His sermon was met by an enthusiastic congregation in Copenhagen. Grundtvig withdrew from the pulpit because of lacking his own parish, and being barred by other churches.[13] In 1821 he resumed preaching briefly when granted the country living of Præstø, and returned to the capital the year after.

In 1825 Grundtvig published a pamphlet, The Church's Rejoinder (Kirkens Gienmæle), a response to Henrik Nicolai Clausen's work on the doctrines, rites and constitutions of Protestantism and Catholicism. A professor of theology at the University of Copenhagen, Clausen argued that although the Bible was the principal foundation of Christianity, it was in itself an inadequate expression of its full meaning. He described the church as a "community for the purpose of advancing general religiousness."[14] In his reply, Grundtvig denounced Clausen as an anti-Christian teacher and argued that Christianity was not a theory to be derived from the Bible and elaborated by scholars. He questioned the right of theologians to interpret the Bible.[15][16] Grundtvig was publicly prosecuted for libel and fined. The Lutheran Church forbade him to preach for seven years. During this time he published a collection of theological works, visited England three times (1829–31), and studied Anglo-Saxon.[11]

In 1832 Grundtvig obtained permission to preach again. In 1839 he was called as pastor of the workhouse church of Vartov hospital, Copenhagen, a post he held until his death. Between 1837 and 1841 he published Sang-Værk til den Danske Kirke (Song Work for the Danish Church), a rich collection of sacred poetry; in 1838 he brought out a selection of early Scandinavian verse; in 1840 he edited the Anglo-Saxon poem "The Phoenix", with a Danish translation. In 1843 he visited England for a fourth time.

From 1844 until after the First Schleswig War, Grundtvig took a prominent part in politics, developing from a conservative into an absolute liberal. In 1861 he received the titular rank of bishop, but without a see. He continued to write and publish until his death, and preached in Vartov every Sunday until a few days before his death.

His preaching attracted large congregations, and he soon had a following. His hymn book effected a great change in Danish church services, substituting the hymns of the national poets for the slow measures of the orthodox Lutherans. In all Grundtvig wrote or translated about 1500 hymns, including "God's Word Is Our Great Heritage".

He was married three times, the last time in his seventy-sixth year. His son Svend Grundtvig (1824–1883) collected and edited Danish ballads.

Grundtvig's theological development continued over his lifetime, and took a number of important turns. He moved from his "Christian awakening" of 1810 to believing in a congregational and sacramental Christianity in later years.

He was most notable for the latter thinking. He always called himself a pastor, not a theologian, reflecting the distance between his ideas and academic theology. The chief characteristic of his theology was the substitution of the authority of the "living word" for the apostolic commentaries. He desired to see each congregation act as a practically independent community.

Grundtvig is the ideological father of the folk high school, though his own ideas on education had another focus. He advocated reforming the ailing Sorø Academy into a popular school aiming at another form of higher education than what was common at the university. Rather than educating learned scholars, he believed the university should educate its students for active participation in society and popular life. Thus practical skills as well as national poetry and history should form an essential part of the instruction. This idea came very close to implementation during the reign of Christian VIII, whose wife Caroline Amalie was an ardent supporter of Grundtvig. The death of the monarch in 1848 and the dramatic political development in Denmark during this and the following years put an end to these plans. At the time, however, Kristen Kold, one of Grundtvig's followers, had already established the first folk high school.

Grundtvig's ambitions for school reform were not limited to the popular folk high school. He also dreamed of forming a Great Nordic University (the School for Passion) to be situated at the symbolic point of intersection between the three Scandinavian countries in Gothenburg, Sweden. The two pillars of his school program, the School for Life (folk high school) and the School for Passion (university) were aimed at quite different horizons of life. The popular education should mainly be taught within a national and patriotic horizon of understanding, yet always keeping an open mind towards a broader cultural and intercultural outlook, while the university should work from a strictly universal, i.e. humane and scientific, outlook.

The common denominator of all Grundtvig's paedagogical efforts was to promote a spirit of freedom, poetry and disciplined creativity, within all branches of educational life. He promoted values such as wisdom, compassion, identification and equality. He opposed all compulsion, including exams, as deadening to the human soul. Instead Grundtvig advocated unleashing human creativity according to the universally creative order of life. Only willing hands make light work. Therefore a spirit of freedom, cooperation and discovery was to be kindled in individuals, in science, and in the civil society as a whole.

In 1815 Grímur Jónsson Thorkelin published the first edition of the Epic of Beowulf titled De Danorum rebus gestis secul. III & IV : Poëma Danicum dialecto Anglosaxonica in a Latin translation. Despite his lack of knowledge of Anglo-Saxon literature, Grundtvig quickly discovered a number of flaws in Thorkelin's rendering of the poems. After a heated debate with Thorkelin, Johan Bülow, who had sponsored Thorkelin's work, offered to support a new translation by Grundtvig - this time into Danish. The result, Bjovulfs Drape (1820), was the first modern language translation of Beowulf.

Grundtvig went on to explore the extensive literature of the Anglo-Saxons which survived in Old English and Latin. In both poetry and prose, it revealed the spirituality of the early Church in the North. Grundtvig was very influenced by these ancient models of Christian and historical thought (notably the 8th-century Bede's Ecclesiastical History, written in Latin). Using the resources of the Royal Library in Copenhagen and of the libraries of Exeter, Oxford and Cambridge in three successive summer visits to England (1829–31), he went on to make transcriptions of two of the four great codices of Anglo-Saxon poetry: the Exeter Book and the codex designated Junius 11 in the Bodleian Library, Oxford. Although he thought to publish them, this project was never realized. Beowulf and Anglo-Saxon literature continued to be a major source of inspiration to Grundtvig. It had a wide-ranging influence upon his work.[17]

Grundtvig holds a unique position in the cultural history of his country; he has been styled the Danish Carlyle and he might also be compared to Emerson. But his style of writing and fields of reference are not immediately accessible to a foreigner, thus his international importance does not match that of his contemporaries Hans Christian Andersen and Søren Kierkegaard.

The magnificent Grundtvig's Church in the Copenhagen district of Bispebjerg was designed by Danish architect Peder Vilhelm Jensen-Klint as a memorial to Grundtvig. Built of yellow brick in a Neo-Gothic expressionist style, it was completed in 1940.

He is honored with a feast day on the liturgical calendar of the Episcopal Church (USA) on September 8.

Grundtvig's secular poetical works were published in a nine-volume edition, the first seven volumes by his second son, the philologist Svend Hersleb Grundtvig. The philological practice of this work, however, is not up to the standards of modern philology. His hymns have been collected in the philologically more stable five-volume edition Grundtvigs Sang-Værk.

No comprehensive foreign language edition of his work exists. A three-volume edition in German, however, is under preparation and projects for an English edition are in progress as well.

The most important editions are:

Important, too, are the numerous articles in English published in the yearbook Grundtvig-Studier (Grundtvig Studies) from 1948 and onwards. Danish is the main language of the journal, but the English articles are prominent and increasing in recent years.

The most important works on Grundtvig are a series of dissertations published since the founding of Grundtvig-selskabet (The Grundtvig Society). All of them contain summaries in major languages, most of them in English. This series includes: