Clutton is a village and civil parish within the Chew Valley in Somerset in the Bath and North East Somerset Council area on the A37 road. It is located 10 miles from Bristol and Bath, very near Temple Cloud. The nearest town is Midsomer Norton (5 miles). The parish which has a population of 1,529[1] includes the hamlet of Breach.

Highbury Hill is the site of the earthwork remains of an Iron Age univallate hillfort. It occupies an area of woodland at the end of a narrow ridge. It is a Scheduled Ancient Monument.[2] The 3 hectares (7.4 acres) site lies in an area of woodland at the south eastern end of a narrow ridge with steep slopes around it. There is a 0.5 metres (1.6 ft) outer bank which is 8 metres (26 ft) long with a shallow 8 metres (26 ft) wide ditch.[2] Some Roman silver coins were found at the site in the late 18th century.[2]

Clutton was called Clutone in the 1086 Domesday Book meaning 'A rocky hill enclosure' from the Old English cludig and tun, but he also points out there is an obscure Celtic word cluttya meaning a 'hen's roost'.[3]

The parish was part of the hundred of Chew.[4]

There is a long history of coal mining in the village and the surrounding Somerset coalfield, but the mines are no longer working. The mines around Clutton were owned by the Earl of Warwick, who also owned sawmills, quarries, brickworks and agricultural interests.[5] The village formerly had a station on the Bristol and North Somerset Railway.

The parish council has responsibility for local issues, including setting an annual precept (local rate) to cover the council’s operating costs and producing annual accounts for public scrutiny. The parish council evaluates local planning applications and works with the local police, district council officers, and neighbourhood watch groups on matters of crime, security, and traffic. The parish council's role also includes initiating projects for the maintenance and repair of parish facilities, such as the village hall or community centre, playing fields and playgrounds, as well as consulting with the district council on the maintenance, repair, and improvement of highways, drainage, footpaths, public transport, and street cleaning. Conservation matters (including trees and listed buildings) and environmental issues are also of interest to the council.

Along with Stanton Drew and Chelwood, Clutton is part of the Clutton ward, which is represented by one councillor on the unitary authority of Bath and North East Somerset which was created in 1996, as established by the Local Government Act 1992. It provides a single tier of local government with responsibility for almost all local government functions within its area including local planning and building control, local roads, council housing, environmental health, markets and fairs, refuse collection, recycling, cemeteries, crematoria, leisure services, parks, and tourism. It is also responsible for education, social services, libraries, main roads, public transport, trading standards, waste disposal and strategic planning, although fire, police and ambulance services are provided jointly with other authorities through the Avon Fire and Rescue Service, Avon and Somerset Constabulary and the Great Western Ambulance Service.

Bath and North East Somerset's area covers part of the ceremonial county of Somerset but it is administered independently of the non-metropolitan county. Its administrative headquarters is in Bath. Between 1 April 1974 and 1 April 1996, it was the Wansdyke district and the City of Bath of the county of Avon.[6] Before 1974 that the parish was part of the Clutton Rural District.[7]

The parish is represented in the House of Commons of the Parliament of the United Kingdom as part of North East Somerset. It elects one Member of Parliament (MP) by the first past the post system of election. It is also part of the South West England constituency of the European Parliament which elects seven MEPs using the d'Hondt method of party-list proportional representation. 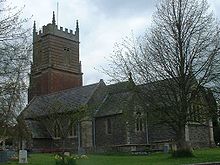 Church of St Augustine of Hippo

The church is dedicated to St Augustine of Hippo. It dates from around 1190, but has had several major restorations. The tower is made of red sandstone with diagonal buttresses ending in pinnacles and probably dates from 1726.[2] The tower contains two bells dating from 1734, made by Thomas Bilbie of the Bilbie family.[8] The church is a Grade II* listed building (Church of St. Augustine at Images of England) Two railed tomb enclosures within the Broadribb family plot are also listed as Grade II, (tomb enclosures at Images of England) as are a group of three Broadribb and Purnell monuments. (Group of 3 Broadribb and Purnell monuments at Images of England) The church is currently under a small amount of renovation.

Further information and pictures of the church are available from: 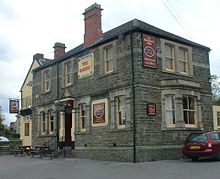