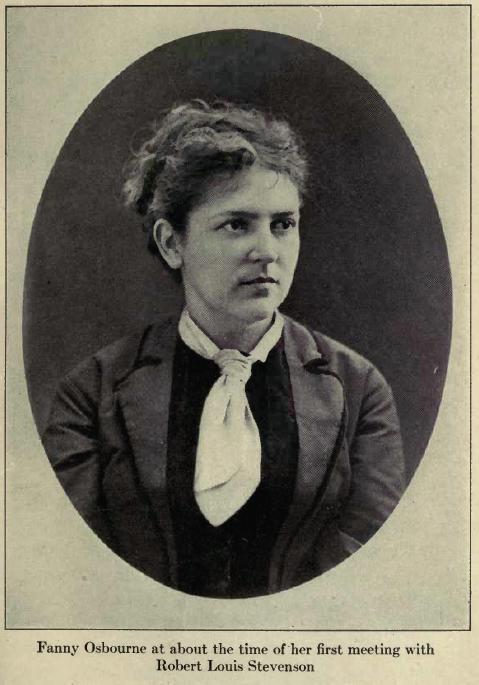 Fanny Vandergrift Osbourne Stevenson ( &mdash; ) was the wife of and mother of Isobel and .

Fanny Vandergrift was born in , the daughter of builder Jacob Vandegrift, and his wife Esther Thomas Keen. She was something of a tomboy, and had dark curly hair. At the age of seventeen she married Samuel Osbourne, a lieutenant on the State Governor's staff. Their daughter Isobel (or 'Belle') was born the following year.

Samuel fought in the , went with a friend sick with to , and via , he ended up in the silver mines of . Once settled there he sent for his family. Fanny and the five-year-old Isobel made the long journey via , the isthmus of , San Francisco, and finally by wagons and stage-coach to the mining camps of the , and the town of Austin in . Life was difficult in the mining town, and there were few women around. Fanny learned to shoot a pistol and to roll her own cigarettes.

The family moved to . Samuel began going with saloon girls, and in 1866 he headed off gold prospecting in the , and Fanny and her daughter journeyed to San Francisco. There was a rumour that Sam had been killed by a grizzly bear, but he returned to the family safe, and a second child Samuel Lloyd was born in 1868. But Samuel continued philandering and Fanny returned to Indianapolis.

The couple were reconciled again in 1869, and lived in Oakland where a second son, Hervey, was born. Fanny took up painting and gardening. However, Sam's behaviour did not improve, and Fanny finally left him in 1875 and moved with her three children to Europe. They lived in for three months, and then in order to allow Fanny to study art, they moved to where Fanny and Isobel both enrolled in the . Hervey sick with scrofulous , died on , and was buried in a temporary grave at .

While in Paris, she met and befriended . Convinced of his talent, she encouraged and inspired him. He became deeply attached to her, but Fanny returned abruptly to California.

Stevenson announced his intention of following her, but his parents refused to pay for it, so he saved for three years in order to pay his own way. In 1879, despite protests of family and friends, Stevenson went to , where Fanny was recovering from an emotional breakdown related to indecision about whether to leave her philandering husband. Stevenson wrote many of his most 'muscular' essays in Monterey while awaiting Fanny's decision.

The lady ultimately chose Stevenson, and in May 1880, they were married in San Francisco. A few days later, the couple left for a honeymoon in the Napa Valley, where Stevenson produced his work "". He later wrote "" in two parts about his passage to America: "From the Clyde to Sandy Hook" and "Across the Plains". His middle-class friends were shocked by his travel with the lower classes; it was not published in full in his lifetime, and his father bought up most copies.

In August 1880, the family moved to Great Britain, where Fanny helped to patch things up between Robert and his father. Always in search of a climate conducive to Stevenson's ailing health, the couple traveled to the Adironacks in the U.S. In 1888, they chartered the "Casco" out of San Francisco and sailed to Western Samoa. Later voyages on the "Equator" and "Janet Nicoll" with Lloyd followed.

After his death, Fanny, imbued with her late husband's love of adventure, returned to California to begin a new life in America and Europe with an adoring companion decades her junior, newsman Ned Field. When Fanny died in on February 18 1914, Field, her last companion-in-adventure, described her as "the only woman in the world worth dying for." She was buried in the grave next to Stevenson on top of Mt. Vaea in Western Samoa.