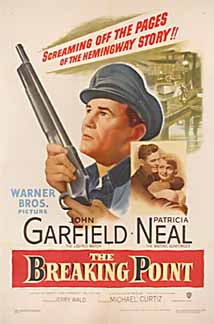 "The Breaking Point" is the second film adaptation of the novel "". The film, directed by , is considered more faithful to the novel than the 1940s version starring .

Garfield plays Harry Morgan a penniless fishing hire proprietor whose business is on the skids and whose family is feeling the economic pinch. He begins to work with a shady lawyer who persuades him to run illegal immigrants into California. When this goes wrong he comes even more under the influence of the lawyer who blackmails him into helping the escape of a gang of crooks who pull a racetrack heist.

"", a 1958 film directed by , is the second of "To Have and Have Not" () and stars in the Bogart/Garfield role and in 's part as the alcoholic sidekick, although Sloane's interpretation was less overtly comedic than Brennan's.