Skink
This article is about the reptile. For other uses, see Skink (disambiguation).

Skinks are lizards belonging to the family Scincidae. Together with several other lizard families, including Lacertidae (the "true" or wall lizards), they comprise the superfamily or infraorder Scincomorpha. With about 1200 described species, the Scincidae are the second most diverse family of lizards, exceeded only by the Gekkonidae (or geckos).

Skinks look roughly like true lizards, but most species have no pronounced neck and their legs are relatively small; in fact several genera (e.g., Typhlosaurus) have no limbs at all. Some other genera, such as Neoseps, have reduced limbs, lacking forelegs, and with fewer than five toes (digits) on each foot. In such species, their locomotion resembles that of snakes more than that of lizards with well-developed limbs. As a general rule, the longer the digits, the more arboreal the species is likely to be. A biological ratio exists that can determine the ecological niche of a given skink species. The SENI (Scincidae Ecological Niche Index) is a ratio based on anterior foot length at the junction of the ulna/radius-carpal bones to the longest digit divided by the snout-to-vent length (SVL).[1]

Most species of skinks have long, tapering tails that they can shed if a predator grabs the tail. Such species generally can regenerate the lost part of a tail, though imperfectly. Species with stumpy tails have no special regenerative abilities.

Some species of skink are quite small; Scincella lateralis typically ranges from 3 to 5.5 inches (7.5 to 14.5 cm), more than half of which is tail. Most skinks however, are medium sized with snout-to-vent lengths of about 12 cm (4 or 5 in), although some grow larger; the Solomon Islands skink, (Corucia zebrata), is the largest known extant species and may attain a snout-to-vent length of some 35 cm (13 to 14 in).

Skinks are generally carnivorous and in particular insectivorous. Typical prey includes flies, crickets, grasshoppers, beetles, and caterpillars. Various species also eat earthworms, millipedes, snails, slugs, isopods, other lizards, and small rodents. Some species, particularly those favored as home pets, have a more varied diet and can be maintained on a regimen of roughly 60% vegetables/leaves/fruit and 40% meat (insects and rodents).[2] 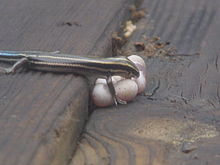 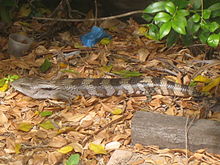 As a family Skinks are cosmopolitan; species occur in a variety of habitats worldwide, apart from boreal and polar regions. Various species occur in ecosystems ranging from deserts and mountains to grasslands. Some species are endangered, such as the Androgynous Skink in New Zealand, with less than 100 reports since first being identified at Molesworth Station South Island by Keith Frankum.[citation needed]

Many species are good burrowers. There are more terrestrial or fossorial (burrowing) species than arboreal (tree-climbing) or aquatic species. Some are "sand swimmers", especially the desert species, such as the mole skink in Florida. Some use a very similar action in moving through grass tussocks. Most skinks are diurnal (day-active) and typically bask on rocks or logs during the day.

Approximately 45% of skink species are viviparous. Many are ovoviviparous (hatching eggs internally and giving birth to live offspring). Some, such as the genera Tiliqua and Corucia, give birth to live young that develop internally, deriving their nourishment from a mammal-like placenta attached to the female – viviparous matrotrophy. However, a recently described example occurring in Trachylepis ivensi is the most extreme to date, of a purely reptilian placenta directly comparable in structure and function, to a eutherian placenta.[3] In skinks however, placental development of whatever degree is of course phylogenetically analogous, rather than homologous to functionally similar processes in mammals.

The approximately 55% of skink species that are oviparous (egg-laying) give birth in small clutches.

Many large genera, Mabuya for example, are still insufficiently studied, and their systematics is at times controversial, see for example the taxonomy of the Western Skink, Eumeces skiltonianus. Mabuya in particular is being split, many species being allocated to new genera such as Trachylepis, Chioninia, and Eutropis.

Skinks in the genus Prasinohaema have green blood due to a buildup of the waste product biliverdin.