Emblem of the Deutsche Reichsbahn-Gesellschaft during the Weimar Republic

The Deutsche Reichsbahn ("German Imperial Railway") – was the name of the German national railway created from the railways of the individual states of the German Empire following the end of World War I.

It was founded in 1920 as the Deutsche Reichseisenbahnen when the Weimar Republic (formally Deutsches Reich – "German Empire" – hence the usage of "Reich" in the name of the railway) took national control of the German railways, which had previously been run by the German states.

In 1924 it was reorganized under the aegis of the Deutsche Reichsbahn-Gesellschaft (DRG), a nominal private railway company, which was 100% owned by the German state.

In 1937 it was reorganized again as a state authority and given the name Deutsche Reichsbahn (DRB). After the Anschluss in 1938 the DR also took over the Bundesbahn Österreich (BBÖ, Federal Railway of Austria).

In 1949 the newly created German Democratic Republic took over the control of the DR on its territory and continued to use the traditional name Deutsche Reichsbahn, while the railway in the new Federal Republic of Germany became the Deutsche Bundesbahn (DB, German Federal Railway). The Austrian Österreichische Bundesbahnen (ÖBB, Austrian Federal Railways) was founded in 1945, and was given its present name in 1947.

The Deutsche Reichseisenbahnen ("German Reich (Imperial) Railways") were established on 1 April 1920 as a union of the existing state railway companies (Länderbahnen) of Prussia, Bavaria, Saxony, Württemberg, Baden, Mecklenburg and Oldenburg. The union of the state railway companies became necessary due to the new constitution of the Weimar Republic of 1 August 1919, which placed responsibility for railways with the national government; like the prewar German Empire, it was known as the German Reich. The state railways that merged were the: 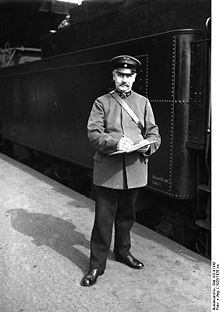 Among the provisions of the 1924 Dawes Plan was a plan to utilize the state railway completely for the payment of war reparations. Following the plan's publication, on 12 February 1924 the Reich government announced the creation of the Deutsche Reichsbahn ("German Reich Railway") as a state enterprise under the Reich Ministry of Transportation (Reichsverkehrsministerium). As this was not enough to satisfy the reparations creditors, on 30 August 1924 a law was enacted providing for the establishment of a state owned Deutsche Reichsbahn-Gesellschaft (DRG) (German Reich Railway Company) as a holding company to operate the national railways. The aim was to earn profits which, in accordance with the Dawes Plan, were to be used to contribute to Germany's war reparations. These terms were later amended in the Young Plan. In total, about 3.87 billion Goldmarks was paid in reparations to the Allied powers.

The beginning of the DRG was characterised by the acquisition of new rolling stock built to standard types, such as the standard steam locomotives (Einheitsdampflokomotiven). The stock already in use was inherited from the various state railways and comprised a great number of designs, many of them quite old. In the latter part of the 1930s, high speed trains like the "Flying Hamburger" and streamlined steam engines with matching cars were developed. The Class 05 streamlined express engine reached a speed of 200.4 km/h (124.5 mph). Before the Second World War the most important rail lines ran east and west. The most modern high speed lines were the Prussian Ostbahn which ran through the Polish corridor, the line from Berlin to Hamburg on which high speed diesel trains ran, the line from Hannover to the Ruhr, the line from Frankfurt am Main to southwest Germany, and the line from Berlin to Breslau (Wrocław).

During the Nazi dictatorship, along with other measures of gaining total control (see Gleichschaltung), the rail network was again placed under direct government control on 10 February 1937, through a newly enacted law re-organizing the Reichsbank and the DRG. To emphasize this, swastikas were added to the Hoheitsadler symbol (the eagle, Germany's traditional symbols of national sovereignty) on the railcars, and the initials DR were held to stand for "Deutsches Reich," although this was legally ambiguous.[citation needed] Mail transport cars sported Deutsche Reichspost.

1938: Absorption of the Austrian Railways

1939-1945: The Reichsbahn in the Second World War and the Holocaust

During World War II, the Reichsbahn was an essential component of German military logistics, providing essential transportation services for the Reich throughout the occupied lands of Europe. In addition, the Reichsbahn's participation was crucial to the effective implementation of the "Final Solution of the Jewish Question" (Endlösung der Judenfrage). The Reichsbahn was paid to transport Jews and other victims of the Holocaust from thousands of towns and cities throughout Europe to meet their death in the Nazi concentration camp system, using Holocaust trains.

The following is an excerpt from the testimony of Holocaust scholar Raul Hilberg:

"The Reichsbahn was ready to ship in principle any cargo in return for payment. And therefore, the basic key — price controlled key — was that Jews were going to be shipped to Treblinka, were going to be shipped to Auschwitz, Sobibor …so long as the railroads were paid by the track kilometer, so many pfennigs per mile. The rate was the same throughout the war. With children under ten going at half-fare and children under four going free. Payment had to be made for only one way. The guards of course had to have return fare paid for them because there were going back to their place of origin..."[1]

Beginning in November 2007, a museum train, the "Train of Commemoration" (Zug der Erinnerung), began a 3000 km tour of Germany as a rolling memorial to the thousands of youth and children who were deported from all over Europe, many via the Reichsbahn, to the camps. A certain amount of controversy has surrounded the train's tour through Germany, in part because of the apparent lack of cooperation on the part of Deutsche Bahn AG (DB AG) concerning such matters as compensation for the use of the DB AG's right of way (during the tour) and the stationing of the train, during its visit to Berlin, at the Ostbahnhof station instead of the more centrally located Hauptbahnhof main railway station. The tour was scheduled to end on 8 May 2008 (the 63rd anniversary of the end of the European portion of WWII) when the train arrived at Auschwitz. However, it continued to make appearances through 2009, and as of January 2010 the website requests visitors to look for further travel plans at the end of February.[2]

With the end of the war in May 1945, operational control of the Reichsbahn was devolved to the respective zones of occupation. The Reichsbahn legally existed in four parts until 1949.

The Soviet zone of occupation became a self-declared socialist state, the German Democratic Republic (commonly known as East Germany), on 7 October 1949. One month prior, on 7 September 1949, the railway systems in the three western zones (the Federal Republic of Germany), were reunified and renamed the Deutsche Bundesbahn (DB - German Federal Railways).

On the formation of East Germany on 7 October 1949, the railway system in the Soviet Zone retained the name Deutsche Reichsbahn (DR), despite the connotations of the word "Reich"; this was due to the designation of the Reichsbahn in postwar treaties and military protocols as the railway operator in West Berlin, a role it retained until the creation of the unified and privatized DB AG at the beginning of 1994.

In the post-war years, the DR in East Germany continued to develop independently of the DB, but very much in parallel. The locomotive classification scheme, based on that of the DRG, was extended. The production, conversion and development of steam locomotives initially continued in earnest; older, especially ex-Länderbahn classes being rationalised and withdrawn from service. A major conversion (Rekonstruction) programme to update steam locomotives and rectify flawed, mainly wartime austerity, classes was carried out in the 1950s. Gradually, however, they were replaced by the more economical and easier-to-maintain diesel and electric classes. In general this happened rather later than in the West. In 1970, the DR renumbered its locomotives in order to conform to new computerised data standards.

On 3 October 1990, the GDR state acceded to the Federal Republic of Germany. Initially the two railway administrations continued to operate separately, but in 1994 they were merged to form the new Deutsche Bahn.

Note that the following sites are in German