Taoist writing on silk, from Mawangdui.

Mawangdui (Chinese: 馬(马)王堆; pinyin: Mǎwángduī, lit. "King of Ma's Mound") is an archaeological site located in Changsha, China. The site consists of two saddle-shaped hills and contained the tombs of three people from the western Han Dynasty (206 BCE – 9 CE). The tombs belonged to the first Marquis of Dai, his wife, and a male who is believed to be their son. The site was excavated from 1972 to 1974. Most of the artifacts from Mawangdui are displayed at the Hunan Provincial Museum.

The tombs and occupants

The tombs were made of large cypress planks. The outside of the tombs were layered with white clay and charcoal; white clay layering was a practice that originated with Chu burials, while charcoal layering was a practice that was followed during the early western Han Dynasty in the Changsha area. The tombs contained nested lacquered coffins, a Chu burial custom. The tombs also followed the burial practices dictated by Emperor Wen of Han, containing no jade or precious metals.

The eastern tomb, Tomb no. 1, contained the remains of a woman in her fifties (Lady Dai - Xin Zhui). Her mummified body was so well-preserved that researchers were able to perform an autopsy on her body, which showed that she probably died of a heart attack. Specifically, her diet was too rich in sugars and meats, and she suffered from arterial-coronary problems. Buried with her were skeletons of various food-animals, jujubes, lotus soup, grains and a complete meal including soup, rice and meat skewers on a lacquer set. Researchers found honeydew melon seeds in her stomach, inferring consumption right before death. She outlived the occupants of the other two tombs. Her personal name was Xinzhui (辛追). 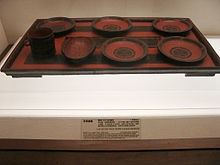 Western Han (202 BC - 9 AD) era lacquerwares and lacquer tray unearthed from the 2nd-century-BC Han Tomb No.1 at Mawangdui

Xinzhui's tomb was the best preserved tomb by far of the three tombs. A complete cosmetic set, lacquered pieces and finely woven silk garments with paintings are almost perfectly preserved. Her coffins were painted according to Chu customs and beliefs with whirling clouds interwoven with mystical animals and dragons. The corpse was bound tightly in layers of silk cloth and covered with a wonderfully painted T-shaped tapestry depicting the netherworld, earth and heavens with Chinese mythological characters as well as Xinzhui. There was also a silk painting showing a variety of exercises researchers call the forerunner of Tai ji.

The western tomb, Tomb no. 2, was the burial site of the first Marquis of Dai, Li Cang (利蒼). He died in 186 BC. The Han Dynasty had appointed Li Cang as the chancellor of the Kingdom of Changsha. This tomb had been plundered several times by grave robbers.

Tomb no. 3 was directly south of Tomb no. 1, and contained the tomb of a man in his thirties who died in 168 BC. The occupant is believed to be a relative of Li Cang and his wife. This tomb contained a rich trove of military, medical, and astronomical manuscripts written on silk.

Western Han painting on silk was found draped over the coffin in the grave of Lady Dai (c. 168 BC) at Mawangdui near Changsha in Hunan province. 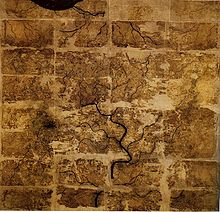 An early Western-Han silk map found in tomb 3 of Mawangdui, depicting the Kingdom of Changsha and Kingdom of Nanyue in southern China (note: the south direction is oriented at the top).

One famous artifact type were the lacquered wine-bowls and cosmetic boxes , which showcased the craftsmanship of the regional lacquerware industry.

One of the most famous artifacts from Mawangdui were the silk funeral banners; the T-shaped banners were draped on the coffin of Tomb no. 1. The banners depicted the Chinese abstraction of the cosmos and the afterlife at the time of the western Han Dynasty. A silk banner of similar style and function were found in Tomb no. 3 on the coffin of Lady Dai's son.

The T-shaped silk funeral banner in the tomb of the Marquise (tomb no. 1) is called the "name banner" with the written name of the deceased replaced with their portrait. We know the name because the tomb's original inventory is still intact, and this is what it is called on the inventory. The Marquise was buried in four coffins, the silk banner drapes the innermost of the coffins.[1]

On the T-shaped painted silk garment, the uppermost horizontal section of the T represents heaven. The bottom of the vertical section of the T represents the underworld. The middle (the top of the vertical) represents earth. In heaven we can see Chinese deities such as Nuwa and Chang'e, as well as Daoist symbols such as cranes (representing immortality). Between heaven and earth we can see heavenly messengers sent to bring Lady Dai to heaven. Underneath this are Lady Dai's family offering sacrifices to help her journey to heaven. Underneath them is the underworld - two giant sea serpents intertwined.

The contents of Tomb no. 2 were destroyed during various attempts to rob the grave. An excavation report has been published within the last 5 years in Chinese, there has not been a publication of the tomb contents in English yet.

Tomb no. 3 contained a silk name banner (similar to that of tomb 1) and three maps drawn on silk: a topographic map, a military map and a prefecture map. The maps display the Hunan, Guangdong and Guangxi region and depict the political boundary between the Han Dynasty and Nanyue. The maps are some of the oldest discovered in China. At the time of its discovery, they were the oldest maps yet discovered in China, until 1986 when Qin State maps dating to the 4th century BC were found.