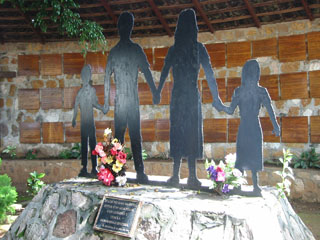 image_width = 200px
caption =
type =
date_drafted =
date_signed = 1969
location_signed = San José,
date_sealed =
date_effective = 18 July 1978
condition_effective = 11 ratifications
date_expiration =
signatories =
parties = 24
depositor =
language =
languages =
website =
wikisource =The American Convention on Human Rights (also known as the Pact of San José) is an international human rights instrument.It was adopted by the nations of the meeting in San José, , in 1969. It came into force after the eleventh instrument of ratification (that of ) was deposited on 18 July 1978.

The bodies responsible for overseeing compliance with the Convention are the and the , both of which are organs of the (OAS).

According to its preamble, the purpose of the Convention is "to consolidate in this hemisphere, within the framework of democratic institutions, a system of personal liberty and social justice based on respect for the essential rights of man."

Chapter I establishes the general obligation of the states parties to uphold the rights set forth in the Convention to all persons under their jurisdiction, and to adapt their domestic laws to bring them into line with the Convention. The 23 articles of Chapter II give a list of individual civil and political rights due to all persons, including the right to life "in general, from the moment of conception", to humane treatment, to a fair trial, to privacy, to freedom of conscience, freedom of assembly, freedom of movement, etc. The single article in Chapter III deals with economic, social, and cultural rights. The somewhat cursory treatment given to this issue here was expanded some ten years later with the Protocol of San Salvador (see below).

Chapter IV describes those circumstances in which certain rights can be temporarily suspended, such as during states of emergency, and the formalities to be followed for such suspension to be valid. Chapter V, with a nod to the balance between rights and duties enshrined in the earlier , points out that individuals have responsibilities as well as rights.

Chapter X deals with mechanisms for ratifying the Convention, amending it or placing reservations in it, or denouncing it. Various transitory provisions are set forth in Chapter XI.

In the ensuing years, the states parties to the American Convention have supplemented its provisions with two additional protocols.

At present, 24 of the 35 OAS's member states are parties to the Convention [ [http://www.oas.org/juridico/english/sigs/b-32.html American Convention on Human Rights ("Pact of San José")] ] :

The treaty is open to all OAS member states, although to date it has not been ratified by or several of the English-speaking Caribbean nations; the signed it in 1977 but has not proceeded with ratification.

Canada did at one point seriously consider ratification, but has decided against it, despite being in principle in favour of such a treaty. The ACHR, having been largely drafted by the predominantly Roman Catholic nations of Latin America, contains anti-abortion provisions, specifically, Article 4.1:cquote|Every person has the right to have his life respected. This right shall be protected by law and, in general, from the moment of conception. No one shall be arbitrarily deprived of his life. This conflicts with the current legality of abortions in Canada. Although Canada could ratify the convention with a reservation with respect to abortion (as did Mexico [ [http://www.cidh.org/Basicos/English/Basic4.Amer.Conv.Ratif.htm Basic Documents: Ratifications of the Convention] ] ), that would contradict Canada's stated opposition to the making of reservations to human rights treaties. Another solution would be for the other states to remove the anti-abortion provisions, but that is unlikely to occur due to strong Catholic feeling in those countries.