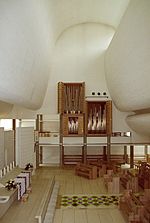 Critical Regionalism is an approach to architecture that strives to counter placelessness and lack of identity in Modern Architecture by utilizing the building's geographical context. The term Critical Regionalism was first used by the architectural theorists Alexander Tzonis and Liane Lefaivre and, with a slightly different meaning, by the historian-theorist Kenneth Frampton.

Critical Regionalism is not regionalism in the sense of vernacular architecture, but is, on the contrary, an avant-gardist, modernist approach, but one that starts from the premises of local or regional architecture. The idea of critical regionalism emerged at a time during the early 1980s when Postmodern architecture, itself a reaction to Modernist architecture, was at its height. However, the writer most associated with Critical Regionalism, Kenneth Frampton, was in fact critical towards postmodernism. Part of the reason for the confusion over the term Critical Regionalism is that Frampton's famous essay "Towards a Critical Regionalism: Six points for an architecture of resistance" was first published in the book "The Anti-Aesthetic: Essays on Postmodern Culture" (1983) edited by Hal Foster. In the Preface to the book, Foster begins by asking whether postmodernism exists at all and what it could even mean. He then states that what nine of the ten authors in the book have in common - the exception is the philosopher Jürgen Habermas - is the common belief that "the project of modernity is now deeply problematic".[1]

In "Towards a Critical Regionalism: Six points for an architecture of resistance", Frampton recalls Paul Ricoeur's "how to become modern and to return to sources; how to revive an old, dormant civilization and take part in universal civilization". According to Frampton's proposal, critical regionalism should adopt modern architecture, critically, for its universal progressive qualities but at the same time value should be placed on the geographical context of the building. Emphasis, Frampton says, should be on topography, climate, light; on tectonic form rather than on scenography (i.e. painting theatrical scenery) and should be on the sense of touch rather than visual sense. Frampton draws on phenomenology for his argument.[2] 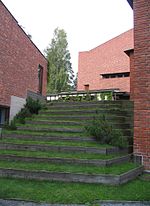 Two examples Frampton briefly discusses are Jørn Utzon and Alvar Aalto. In Frampton's view, Utzon's Bagsværd Church (1973–6), near Copenhagen is a self-conscious synthesis between universal civilization and world culture. This is revealed by the rational, modular, neutral and economic, partly prefabricated concrete outer shell (i.e. universal civilization) versus the specially-designed, 'uneconomic', organic, reinforced concrete shell of the interior, signifying with its manipulation of light sacred space and 'multiple cross-cultural references', which Frampton sees no precedent for in Western culture, but rather in the Chinese pagoda roof (i.e. world culture). In the case of Aalto, Frampton discusses the red brick Säynätsalo Town Hall (1952), where, he argues, there is a resistance to universal technology and vision which is effected by utilizing the tactile qualities of the building's materials. He notes, for instance, feeling the contrast between the friction of the brick surface of the stairs and the springy wooden floor of the council chamber.

According to Tzonis and Lefaivre, critical regionalism need not directly draw from the context; rather elements can be stripped of context but used in unfamiliar ways. Here the aim is to make evident a disruption and loss of place, that is already a fait accompli, through reflection and self-evaluation.

Subsequently, the term "critical regionalism" has also been used in cultural studies, literary studies, and political theory, specifically in the work of Gayatri Chakravorty Spivak. In her 2007 work "Who Sings the Nation-State?", co-authored with Judith Butler, Spivak proposes a deconstructive alternative to nationalism that is predicated on the deconstruction of borders and rigid national identity.[3] Douglas Reichert Powell's book Critical Regionalism: Connecting Politics and Culture in the American Landscape (2007) traces the trajectory of the term critical regionalism from its original use in architectural theory to its inclusion in literary, cultural, and political studies and proposes a methodology based on the intersection of those fields.