Planet of the Vampires

Planet of the Vampires

Infobox_Film
name = Planet of the Vampires 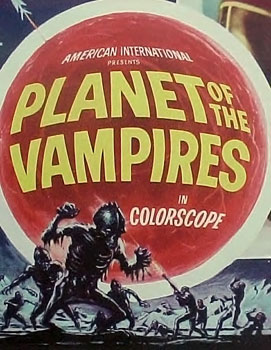 "Planet of the Vampires" (Italian title: "Terrore nello spazio") is a 1965 Italian science fiction/ directed by . The film stars Barry Sullivan and . The screenplay, by Bava, Alberto Bevilacqua, Callisto Cosulich, Antonio Roman, and Rafael J. Salvia, was based on an science fiction , Renato Pestriniero's "One Night of 21 Hours". The story follows the horrific experiences of the crew members of two giant that have crash landed on a forbidding, unexplored . The disembodied inhabitants of the world possess the bodies of the crew who died during the crash, and use the animated corpses to stalk and kill the remaining survivors.

The film was co-produced by and Italian International Film, with some financing provided by 's Castilla Cooperativa Cinematográfica. and are credited with the script for the AIP release version. Years after its release, some critics suggested that the film's details and visual design appeared to have been a major influence on 's "Alien" (1979).

Two huge interplanetary ships on an expedition into deep uncharted space receive a distress signal emanating from Aura, an unexplored planet. Both ships, the Galliott and the Argos, respond and attempt to land on the surface of the fog-encased world. While entering the planet's atmosphere, the crew of the Argos becomes possessed by an unknown force and try to violently kill each other. Only Captain Markary (Sullivan) has the will to resist, and he is able to force all of the others aboard his ship out of their hypnotic, murderous state.

After the Argos lands on the surface, the crew embarks and drifts across the eerie, rocky landscape in search of the other ship. Thick, pulsating mists, lit by ever shifting eerie colors, saturate the terrain. When they finally arrive at the Galliott, they find that every crew member has been brutally murdered. Markary’s younger brother, Toby, is among the dead. They proceed to bury as many of the corpses as they can, but several bodies are locked inside the ship’s main control room. Markary departs to get tools that will assist them in opening the sealed room, but when he returns, all of the corpses have vanished.

Some of the Argos’ crew are killed. Tiona (Evi Marandi) sees some of the dead crew members walking in the ship, and she becomes paralyzed with fear. Markary advises what remains of his crew that they are all in danger and must escape from the planet. Unfortunately, during landing the ship had incurred serious damage that will take time to repair. During the waiting period that ensues, several more murders occur. In a private tape recording, Markary admits that he suspects none of them may survive.

While exploring the planet, Wes (Ángel Aranda) discovers the ruins of a spaceship a few miles from the Argos. Markary, Sanya (Norma Bengell), and Carter () investigate. Once inside the ship, they find the mummified corpses of the long dead crew. They realize that they are not the first ones to have been drawn to the planet by the distress beacon. Markary and Sanya are temporarily trapped inside the ship, but manage to escape and make their way back to the Argos. Carter inexplicably vanishes.

Suddenly, two survivors of the Galliot, Kier () and Sallis (Massimo Righi) arrive at the Argos and attempt to steal the ship’s Meteor Rejector device. Kier is able to escape with the machine, but Markary overpowers Sallis. During the ensuing fight, Markary tears open Sallis’ uniform, exposing his putrescent, dead flesh and bone. Sallis then tells Markary that he is an Auran manipulating Sallis’s corpse. He reveals that he and others deliberately lured the two ships to their planet in order for the Aurans to escape from the dying world. With the crew of the Galliott under their complete control, Sallis says they will be able to use the ship to escape to the world the crew members came from. Although Sallis tells Markary that they should not resist, Markary responds that he and his crew will fight to the death. Markary and his crew rush to the Galliott to steal back the Meteor Rejector. They place large explosives in the Galliott, and Sanya successfully captures the device. During a violent struggle with the aliens, Dr. Karan (Fernando Villeña) and Tiona are both killed. Markary and Sanya return to the Argos and blast away to safety, with Wes, the only other survivor, also onboard. Wes notices that Markary is acting erratically, and he admits his suspicions to Sanya. Markary and Sanya then reveal themselves as being possessed by the Aurans. They ask Wes to join them. Wes refuses, and sabotages the Meteor Rejector by hitting it with a long piece of metal. However, he fatally electrocutes himself while doing so. Because the device has been broken beyond repair, Markary and Sanya decide to land on a nearby planet, instead of the one originally planned. This new planet is called…Earth.

had achieved a great deal of commercial success in the early 1960’s with Bava’s "Black Sunday" (1960) and "Black Sabbath" (1963), as well as dozens of lesser Italian films, including several pictures. Eventually, AIP heads and decided to coproduce some of these films, rather than just pay for the rights to distribute them, in order to have more control over their content. "Planet of the Vampires" was one such coproduction, financed by AIP and Italy’s Fulvio Lucisano for Italian International Film, along with some Spanish production money provided by Castilla Cooperativa Cinematográfica. AIP provided the services of writer Ib Melchior, whose previous movies had included such modest hits as "" and "", as well as the relatively big budget "". Melchior wrote the screenplay for the English language version of the film, with some assistance from AIP producer Louis M. Heyward.

American Barry Sullivan and Brazilian led the cast of international actors. Writer Robert J. Skotak reported that each castmember "used their own native language on the set, in many cases not understanding what the other actors were saying."

Restricted by a low budget, Bava was unable to utilize opticals, so all of the film’s extensive visual effects work were done “in camera”. Miniatures and visuals are used throughout, with lots of colored fog adding atmosphere but also obscuring the sheer cheapness of the sets. [cite web|url=http://www.dvdtalk.com/dvdsavant/s385planet.html|last=Erickson|first=Glenn|title=DVD Savant Review: Planet of the Vampires|publisher=DVD Savant|accessdate=2006-07-09] Bava explained: "Do you know what that unknown planet was made of? A couple of plastic rocks — yes, "two": "one" and "one"! — left over from a mythological movie made at ! To assist the illusion, I filled the set with smoke."

A survey of six reviewers on the website resulted in 50% of the respondents reacting negatively to the film. Of the three who disliked it, Ken Hanke felt the film "looks great but [is] dramatically lacking", and a "Ozu's World Movie Reviews" writer noted that he "lost interest in wanting to know more about the supernatural manifestations." [cite web|url=http://www.rottentomatoes.com/m/planet_of_the_vampires/|last=|first=|title=Planet of the Vampires|publisher=Rotten Tomatoes|accessdate=2007-01-26]

Several critics have suggested that Bava's film was a major influence on 's "Alien" (1979), both in terms of details and visual design. Derek Hill, in a review of the MGM Midnite Movies release of "Vampires" written for "Images Journal", noted, "Bava’s film (along with "", 1958) was a direct influence on Ridley Scott’s 1979 big budget B-movie "Alien". But where Scott’s film tried to mask its humble drive-in origins, "Planet of the Vampires" revels in its origins. The film literally feels like a cover come to garish life...” [cite web|url=http://www.imagesjournal.com/issue10/reviews/mariobava/planet.htm|last=Hill|first=Derek|title=Planet of the Vampires|publisher=Images Journal|accessdate=2007-01-24] Robert Monell, on the "DVD Maniacs" website, observed, " [M] uch of the conceptual design and some specific imagery in the Ridley Scott screamer undoubtedly owes a great debt to Mario Bava's no budget accomplishments.” [cite web|url=http://www.dvdmaniacs.net/Reviews/M-P/planet_of_the_vampires.html|last=Monell|first=Robert|title=Planet of the Vampires|publisher=DVD Maniacs|accessdate=2007-01-24]

One of "Vampires"' most celebrated sequences involves the astronauts performing an exploration of an alien, derelict ship discovered in a huge ruin on the surface of the planet. The crewmembers climb up into the depths of the eerie ship and discover the gigantic remains of long dead monstrous creatures. In 1979, "" noted the remarkable similarities between this atmospheric sequence and a lengthy scene in the then-new "Alien". The magazine also pointed out other minor parallels between the two films.

Tim Lucas has noted that the basic plot and ideas of the film not only inspired "Alien" but “continue to influence filmmakers and inspire the genre today, as witnessed by ’s "Pitch Black" (2000) and ’s "" (2001).”