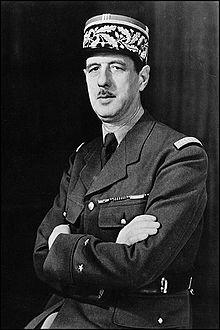 Gaullism (French: Gaullisme) is a French political ideology based on the thought and action of Resistance leader then president Charles de Gaulle.

The main theme of de Gaulle's foreign policy was national independence, and maintaining as much control as possible of as many of France's colonies as possible (cf. de Gaulle's policy on Indochina) with, as some practical consequences, some degree of opposition to international organizations such as NATO or the European Economic Community. The basic tenets were that France should not have to rely on any foreign country for its survival (thus the creation of the French nuclear deterrent) and that France should refuse subservience to any foreign power, be it the United States or the Soviet Union. One can also cite what foreign observers dubbed the policies of grandeur, that is, the insistence that France be a major power in the world scene and that military and economic forces be established to back this claim. In that respect, Gaullism significantly influenced the foreign policy of France in the subsequent decades, even after Gaullists were nominally no longer in power.

Foreign critics, particularly in the United Kingdom and the United States, derided and resented de Gaulle's policy "of grandeur". A major point of friction was de Gaulle's decision to withdraw France from the integrated military command of NATO (but not from NATO itself) and to expel NATO from its headquarters at Fontainebleau. De Gaulle refused to allow foreign troops on French soil if these troops were not under French command, a move that greatly angered the United States, which had troops in France at the time and expected French military and foreign policies to be aligned with its own.

One may also cite social conservatism, and economic dirigisme and volontarisme as parts of the Gaullist ideology, but these are not necessarily accepted by all who called themselves Gaullists. Gaullism is generally considered a right-wing ideology, but there have also been left-wing Gaullists, the differences between the two consisting of differing social and economic policies.

Gaullism has sometimes been characterized as a form of populism, since de Gaulle relied heavily on his personal charisma. That is, de Gaulle preferred a direct relationship with the people to parliamentary politics; to some extent, he was scornful of politicians and political games. He resigned after failing to obtain a majority in a constitutional referendum on a reform of the French Senate.

The "Gaullists" as a political group used to refer to the Union of Democrats for the Republic.

Since de Gaulle's death, and the break-up of the UDR, the exact meaning of Gaullism has become somewhat unclear. In 1980s-1990s usage, "Gaullism", or "Neo-Gaullism", referred to the Rally for the Republic (now integrated into the Union for a Popular Movement), the centre-right party founded by Jacques Chirac. Chirac has, in the past, adopted both dirigiste and laissez-faire approaches to economics; he later took on a pro-European stance after having famously denounced Europeanism in the Call of Cochin. For these reasons, some on the right, such as Charles Pasqua, denounced Chirac and his party as not being "true Gaullists".

President Nicolas Sarkozy's Union for a Popular Movement is the current heir of Gaullism.

There are people on the political left who also call themselves Gaullists. Even Socialist president François Mitterrand, who denounced de Gaulle's way of ruling as a permanent coup d'état,[1] was very intent on keeping the nuclear deterrent and asserting France's independence. 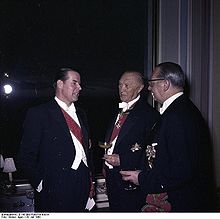 The expression Gaullist has also been used in the politics of the Federal Republic of Germany in the 1950s and 1960s. In the governing Christian Democratic party some wanted to strengthen the ties with the United States, the Atlantiker (Atlanticians), others wanted to build up a European counterweight, with the help of France, the Gaullists.

The most notable Gaullist was chancellor Konrad Adenauer, an outstanding Atlantiker his minister of foreign affairs, Schröder. A typical Atlantiker was Protestant and believed in free market economy, a typical Gaullist was Catholic and tended toward Rhine Capitalism with its more regulated markets and state intervention.

A problem to the Gaullists has been that their concept of foreign relationships was based on a strong European integration, which needed support from France. French president Charles de Gaulle actually was reluctant to give more power to European institutions and advocated instead a less tight Europe of the nations.

After de Gaulle's retreat in 1969 and the end of Christian Democratic government in Germany the same year, the distinction lost its prominence. Anyway, even Gaullists always believed that the relationship to the United States was in general the most important.