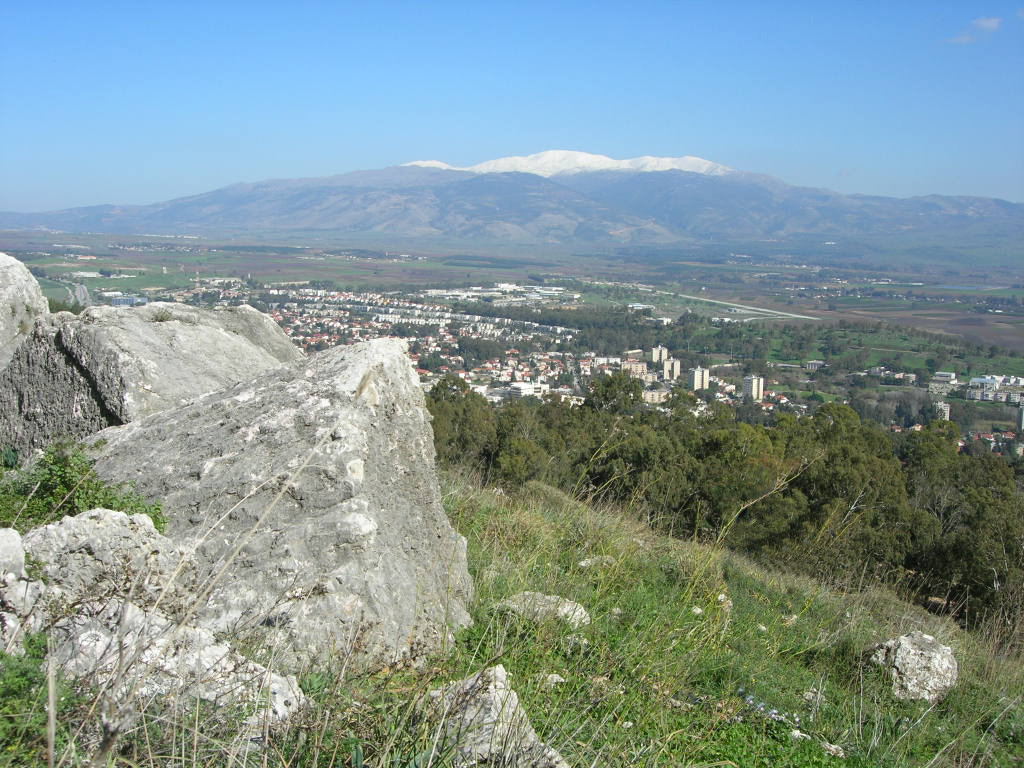 Kiryat Shmona ( _he. קִרְיַת שְׁמוֹנָה, "lit." City of the Eight) is a located in the North District of on the western slopes of the on the Lebanese border. The name was named for the eight people, including , who died in 1920 defending . Today, about one-third of Kiryat Shmona's population of 22,100

The town of Kiryat Shmona was established in May 1949

Stone rubble from the houses marks the site of al-Khalisa whilst the school, village mosque and minaret, as well as the Mandate government's office buildings stand abandoned. The level land surrounding the site was cultivated by the settlers and has continued to be done so.fact|date=October 2008

Kiryat Shmona's location close to the Lebanon makes it a rich target for cross-border attacks.

On April 11, 1974, the , sent three members across the border from Lebanon to Kiryat Shmona. They killed eighteen residents of an apartment building, including many children, before being killed in an exchange of fire at the complex, which became known as the . [cite web|url=http://www.jewishvirtuallibrary.org/jsource/History/time70s.html|publisher=|title=Modern Israel & the Diaspora (1970-1979)|accessdate=2008-09-29] [cite web|url=http://www.palestinefacts.org/pf_1967to1991_terrorism_1970s.php|title=What Happenned to Ma'alot, Kiryat Shmona, and Other Terrorist Targets in the 1970s?|publisher=Palestine Facts|accessdate=2008-09-29]

In the years 2000-2006, the locals enjoyed relative peace but suffered from loud explosions every few weeks because of Hezbollah anti-aircraft cannons fired at IAF planes flying across the Israeli-Lebanese border.

During the , the city was again the target of Hezbollah Katyusha rocket attacks. Approximately half of the city’s residents had left the area, and the other half who remained stayed in bomb shelters. During the war, a total of 1,012 Katyusha rockets hit Kiryat Shmona.

Kiryat Shmona is located in the next to the , about 5 km south and 2 km east of the Israel–Lebanon border. Its elevation is about 150 m above sea level.

According to CBS, in 2001 the ethnic makeup of the city was 97.9% ish and other non-Arabs, without significant population. In 2001 there were 121 immigrant settlers. The Jewish population of the town is largely of and heritage, and many are industrial workers employed in local small industry and in neighboring kibbutzim.

Kiryat Shmona has diverse economic activities amongst its inhabitants. The town's economy is based on both light industry, involving consumer-oriented products such as communications, information technology, and electronics as well as agriculture on the surrounding lands and tourism.

The town has a cable car link with Manara above in the Naftali mountain range and also is home to an activity center and run located in the south of the town.

Kiryat Shmona is the smallest city in Israel with a top flight football club, Ironi Kiryat Shmona. Formed by a merger of Hapoel Kiryat Shmona and Maccabi Kiryat Shmona in 2000, the club won promotion to the top division for the first time at the end of the 2006-07 season.