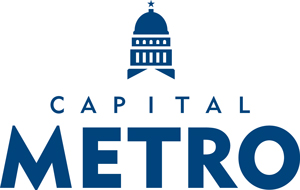 Capital Metropolitan Transportation Authority, or Capital Metro is a provider owned by the city of . It operates buses and will begin operating a system in 2009. Capital Metro serves Austin and several suburbs in Travis and Williamson Counties.

Currently more than 140,000 passenger trips are made every day to more than 3,000 stops in 400 buses.Fact|date=April 2008 In doing so, the agency boasts the highest ridership per capita in Texas and has experienced one of the fastest rates of growth of any major transit system in the nation. Fact|date=April 2008

The creation of Capital Metro was approved in 1985 by the citizens of Austin with a one-cent sales tax. In 1986, the system was launched, taking over the existing city of Austin bus services.

In 1989, public perception was that too many buses were running virtually empty. The MTA tax was cut to 3/4 percent, and Capital Metro attempted to boost ridership by eliminating fares entirely. Although the program was wildly successful in attracting new riders, a perception created by a few in the media was that there were too many "problem riders" using the system. [cite web |url=http://peopleformoderntransit.org/members/pmtadmin/home.nsf/e93baddc3ba8bf0a88256d42000f7a73/088168291f81678a88256d5100101f2d!OpenDocument |title = Fare-free Buses, The Austin Experience |accessdate = 2007-09-12 |work = People for Modern Transit ] Both of these footnoted references point exclusively to testimony by a former Capital Metro board member turned staffer, Lyndon Henry, whose assertions that ridership only increased by 10 percent of regular fixed-route riders, that operating expenses skyrocketed, and that vagrants drove away normal riders contradict documents from the period. [cite web |url = http://www.busatx.org/archives/freefareperiod |title = Free Fare Period, 1989-90 |accessdate = 2007-15-20 |work = Bus Riders Union of Austin, Texas ]

Market research showed that "In only a couple of isolated instances are on-board safety or less than desirable passengers or anything else negatively attributed to the free fare program cited as reasons for discontinued use of bus service." [cite web |url = http://www.busatx.org/files/farefree_marketresearchstudy.pdf |title = Free Fare Telephone Survey. 1993. Page 1. |accessdate = 2008-05-16 |work = NSI Market Research ] Despite the facts and widespread support -- general public approval of the fare-free program was 81%, even though 49% of respondents had never used Capital Metro services; among riders, it was 97% -- the political forces fearing the media farces reinstated fares in January 1991.

In response to the new ADA compliance rules passed in 1990, the system eventually became the first bus transit agency to have its entire bus fleet equipped with wheelchair ramps.

In October 1995, Capital Metro's board of directors increased the MTA sales tax back to its original rate of one percent, promising to set aside the additional quarter percent for future projects. This brought the annual tax burden up to $349 per household.

In 1997, Capital Metro's board of directors was "reorganized" just ahead of a performance review by the Texas Comptroller. [cite web |url = http://www.window.state.tx.us/tpr/capmet/cmet_toc.htm |title = Public Transit, Public Trust |accessdate = 2007-09-10 |work = John Sharp, Texas Comptroller of Public Accounts ] The review cited "ongoing criminal investigation" by the , "irresponsible management", "expensive, embarrassing mistakes", "dubious contracting and purchasing practices", $118,000 spent on "food, parties, and presents for its employees" and culminated with "We have never, in all of the performance reviews we have conducted, seen an agency with such a lack of accountability." [cite press release |title=Sharp Report Offers 147 Recommendations to Improve Operations and Restore Public Trust in Capital Metro |publisher=Texas State Comptroller |date=1998-07-15 |url= |format= |language= |accessdate= |quote= ]

In 2004, Capital Metro added a trip planner to its web site. Riders enter their intended origin and destination, along with optional time, date, and other information, and the trip planner displays itineraries showing the stops, departure and arrival times, and times to get from the origin to the destination.

In 2004, after four years of additional lobbying by Capital Metro, a commuter rail plan &mdash; to be built on pre-existing freight rail lines &mdash; won voter approval. 's new rail line will run from Leander through northwest Austin and east Austin before terminating at a station on the southeastern edge of downtown Austin, at the location of the .Fact|date=September 2008 It was scheduled for completion by December 2008, but is now expected to open March 2009. [cite web |url=http://www.statesman.com/news/content/news/stories/local/09/30/0930capmetro.html |title=Feds OK Cap Metro's passenger rail cars |date=2008-09-30 |last=Wear |first=Ben |publisher=]

In September 2005 won a bid to build six rail cars for the system. [cite press release|publisher=Stadler|date=, |title=Stadler Wins Commuter Rail Car Award with Capital Metro|url=http://www.stadlerrail.com/default.asp?n=68&ms=2&h=1&id=57&s=2&news_id=132] Those six cars will carry up to 1000 commuters per trip, on five routes in the morning, five in the evening, with a handful of routes running during the midday. The initial cost for this rail line is $90 million dollars. [cite web |url = http://www.altamontpress.com/discussion/read.php?1,1596,1596 |title = Ding, Ding, Ding Goes the Commuter Train |accessdate = 2007-09-10 |author = Ben Wear |publisher=Austin American-Statesman ]

In 2008, StarTran was once again considering a general strike, despite the fact that StarTran employees were already the highest paid bus operators in the state [cite web |url=http://www.dailytexanonline.com/news/2008/08/25/Opinion/Viewpoint.forecasting.A.Bus.Strike-3402668.shtml |publisher=The Daily Texan |title=VIEWPOINT: "Forecasting a bus strike" |accessdate=2008-08-25 |date=August 25, 2008]

Capital Metro has a [http://www.capmetro.org/news/csac.asp customer service advisory committee] which meets to provide feedback to the agency on how to continue improving service and facilities.

The [http://www.capmetro.org/riding/fares_2.asp fares for Capital Metro's services] are as follows:

Students twelve and older may be required to show school ID to receive student fares.

Bus passes are available at the Capital Metro store and at area grocery shops.

Service to other areas in the Austin metropolitan area is provided by the .

University of Texas at Austin shuttles