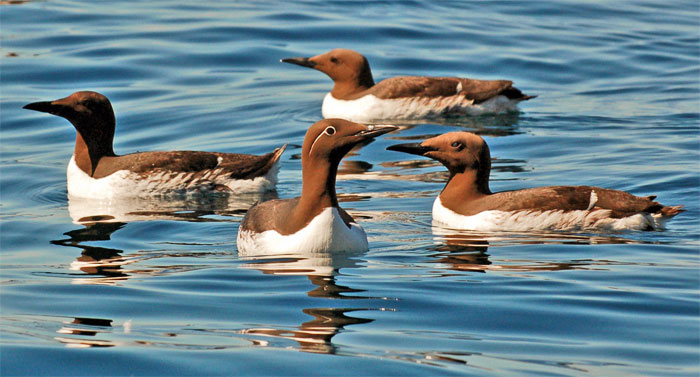 The Common Guillemot or Common Murre ("Uria aalge") is a large . It is also known as the Thin-billed Murre in . It has a distribution, occurring in low-Arctic and boreal waters in the North- and North . It spends most of its time at sea, only coming to land to breed on rocky cliff shores or islands.

Common Guillemots have fast direct flight but are not very agile. They are more manoeuvrable underwater, typically diving to depths of 30&ndash;60 m (100&ndash;200 ft), and depths of up to 180 m (600 ft) have been recorded.

Common Guillemots breed in colonies at high densities, nesting pairs may be in bodily contact with their neighbours. They make no nest, their single egg is incubated on bare rock. Eggs hatch after ~30 days incubation. The chick is born downy, and can regulate its body temperature after 10 days. They leave the nest site in around 20 days accompanied by the male parent. Chicks cannot fly when they leave the nest but are capable of diving as soon as they hit the water. The female stays at the nest site about 14 days after the chick has left.

Both male and female Common Guillemots moult after breeding and become flightless for 1-2 months. In southern populations they occasionally return to the nest site throughout the winter. Northern populations spend the winter farther from their colonies.

The auks are a family of s related to the s and s which contains several genera. The Common Guillemot is placed in the (murre) genus "Uria" (Brisson, 1760), which it shares with the or Thick-billed Murre, "U. lomvia". These species, together with the , and the make up the tribe Alcini. This arrangement was originally based on analyses of auk morphology and .

The binomial name derives from Greek "ouriaa", a waterbird mentioned by , and Danish "aalge", "auk" (from "alka").

The plumage of first winter birds is the same as the adult basic plumage. However, the first pre-alternate moult occurs later in the year. The adult pre-alternate moult is December - February, (even starting as early as November in "U. a. albionis"). First year birds can be in basic plumage as late as May, and their alternate plumage can retain some white feathers around the throat.

Some individuals in the North Atlantic, known as "bridled guillemots", have a white ring around the eye extending back as a white line. This is not a distinct subspecies, but a polymorphism which becomes more common the farther north the birds breed - perhaps with the northerly , which has a white bill-stripe but no bridled morph. The white is highly contrasting especially in the latter species and would provide an easy means for an individual bird to recognize s in densely-packed breeding colonies.

The chicks are downy with blackish feathers on top and white below. By 12 days old, contour feathers are well developed in areas except for the head. At 15 days, facial feathers show the dark eyestripe against the white throat and cheek.

The Common Guillemot flies with fast wing beats and has a flight speed of 50 mi/hr (80 km/h).

This bird is a pursuit-diver that forages for food by swimming underwater using its wings for propulsion. Dives usually last less than one minute, but the bird swims underwater for distances of over 50 m (160 ft) on a regular basis. Diving depths up to 180 m (600 ft) have been recorded and birds can remain underwater a couple of minutes.

The breeding is islands, rocky shores, cliffs and sea stacks. The range is:

Some birds are permanent residents; northern birds migrate south to open waters near , southern California, Japan, and the western . Common Guillemots rest on the water in the winter and this may have consequences for their metabolism. In the (which shares this winter habit) resting metabolism is 40% higher on water than it is in air.

The Common Guillemot can venture far from its breeding grounds to forage; distances of 100 km and more are often observed

The Snake Pipefish is occasionally eaten, but it has poor nutritional value. The amount of these fish is increasing in the Common Guillemot's diet. Since 2003, the Snake Pipefish has increased in numbers in the North-east Atlantic and North Sea and sandeel numbers have declined.

The Common Guillemot has a variety of calls, including a soft purring noise.

This species nests in densely-packed colonies (known as "loomeries"), with up to twenty pairs occupying one square metre at peak season. Common Guillemots do not make nests and lay their eggs on bare rock ledges, under rocks, or the ground. They first breed at four to six years old and average lifespan is about 20 years.

Immature birds return to the natal colony, but from age 5 onwards ~25% of birds leave the colony, perhaps dispersing to other colonies.

Courtship displays including bowing, billing and mutual preening. The male points its head vertically and makes croaking and growling noises to attract the females. The species is , but pairs may split if breeding is unsuccessful.

Common Guillemot eggs are large (around 11% of female weight

Eggs are laid between May and July for the Atlantic populations and March to July for those in the Pacific. The female spends less time ashore during the two weeks before laying. When laying, she assumes a "phoenix-like" posture: her body raised upright on vertical tarsi; wings half out-stretched. The egg emerges point first and laying usually takes 5-10 minutes.

The eggs vary in colour and pattern to help the parents recognize them, each egg's pattern being unique. Colours include white, green, blue or brown with spots or speckles in black or lilac. After laying, the female will look at the egg before starting the first incubation shift.

Growth of the chick

Chick occupy an intermediate position between the chicks of genus and the semi-precocial chicks of the .

Provisioning is usually divided equally between each parent, but unequal provisioning effort can lead to divorce.

Major oil spills double the winter mortality of breeding adults but appear to have little effect on birds less than three years old.

Nesting Common Guillemots are prone to two main sources of recreational disturbance: and . Sea cliffs are a paradise for climbers as well as birds; a small island like has over 1000 described climbing routes.

Birdwatching has conflicting effects on Common Guillemots. Birdwatchers petitioned the UK government to introduce the . This act was designed to reduce the effects of shooting and egg collecting during the breeding season.

eabirds as indicators of marine health

When Common Guillemots are feeding their young, they return with one fish at a time. The provisioning time relates to the distance of the feeding areas from the colony and the numbers of available fish. There is a strong non-linear relationship between fish density and colony attendence during chick-rearing.