Molson
This article is about the brewing company. For other uses, see Molson (disambiguation).

Molson-Coors Canada Inc. is the Canadian division of the world's fifth-largest brewing company, the Molson Coors Brewing Company. It is the second oldest company in Canada after the Hudson's Bay Company. Molson's first brewery was located on the St. Lawrence River in Montreal where the Molson family continues to maintain its headquarters today.

Founded in Montreal in 1786, Molson Coors Canada is the oldest brewery in North America and continues to produce beer on the site of the original brewery. The company brews and markets a number of the most popular brands of beer in Canada. Domestic labels include Molson Canadian, Molson M, Molson Export, Molson Dry, Old Style Pilsner, Rickard’s, Creemore Springs and Granville Island Brewing.[1] Through partnerships with other major brewers, Molson Coors Canada also offers a diverse portfolio of beer brands, including Coors Light, Corona, Miller Genuine Draft, Heineken, Foster's Lager and Tiger. Molson employs 3,000 people in Canada and operates five breweries in locations across the country (Vancouver, Toronto, Montreal, Moncton and St. John's), as well as the Creemore micro-brewery in Ontario and Granville Island Brewing in British Columbia. Molson Coors Canada is part of the Molson Coors Brewing Company.

Founded by John Molson in Montreal in 1786, and now seven generations later, the Molson family name in brewing is the second oldest company in Canada, after the Hudson's Bay Company. The Montreal facility is the oldest brewery in North America, with operations ongoing on the site of the original brewery since the time of founding. Although the plant has undergone numerous transformations in the past 224 years, the cellars once used to store beer are still intact beneath the current building.

Not long after his arrival in Montreal in 1782, Molson sensed the market potential for beer in the then British colony. Prices for wine, rum and port were rising and an influx of English and Irish immigrants were particularly partial to beer. When he became of legal age, Molson used the money inherited from his parents to acquire a small brewery housed in a wooden building on the shores of the St Lawrence, just outside the fortifications of the burgeoning City of Montreal.

Molson worked hard to perfect the brewing process. He returned to England to purchase the finest quality barley seeds. Upon his return, he offered the seeds free of charge to neighbouring Montreal farmers who agreed to grow them to satisfy the brewery's need for malt. Molson delivered his first brew in 1786, only six weeks after taking the helm. Priced at just five cents a bottle, his brew sold very well.

Molson took advantage of the many business opportunities of the time. He quickly diversified his investments, opened a lumber yard and began issuing loans to local Montreal merchants. In 1816, the family enterprise began to take shape when founder John Molson entered into an association with his three sons, John Jr., Thomas, and William.

Although brewing proved to be Molson's most sustainable field of endeavour, other activities were added down through the company's lengthy history. Molson was the first company to own and operate a fleet of steamboats which were used to transport people and goods between Quebec and Ontario. John Molson and his sons also founded the Molson Bank which later merged with Bank of Montreal.

Molson Brewery considerably expanded the breadth of corporate activities throughout the 20th century. In 1945, the family decided to transform the company into a public, limited liability enterprise. It then became possible to acquire an ownership in the company without being a member of the Molson family. This made it possible for the company to expand and inaugurate a new brewery in Toronto in 1955. Two years later, in 1957, the family acquired the Montreal Forum and the famed Canadiens Hockey Club, initiating the start of a long and glorious association with Montreal's ever popular hockey team. The company continued to develop and, in 1958, acquired Six breweries which included five establishments in Western Canada, lending Molson nationwide presence. In 1989, the company consolidated market share in Quebec through a merger with Carling O'Keefe. As a result, Molson became the largest brewery in Canada and the fifth largest in the world.

In 2005, Molson merged with US-based Coors to form Molson Coors Brewing Company. This was followed in 2007 by the opening of a new brewery in Moncton, New Brunswick. Sixth generation Eric Molson retired in 2009 however his sons Andrew and Geoff continue to be active in company affairs within as members of the corporate Board of Directors.[2]

Molson Coors bought Creemore Springs Brewery on 22 April 2005.[3] Operations of Molson Coors in Brazil was sold to the Mexican group FEMSA in 2006.

On October 9, 2007, SABMiller and Molson Coors agreed to combine their U.S. operations in a joint venture called Miller Coors. SABMiller is to own 58% of the unit, which is to operate in the U.S. and Puerto Rico but not Canada, where Molson Coors is strongest. Molson Coors is to own 42%, but the parties are to have equal voting power.[2]

Molson-specific brands in Canada and the United States include Molson Canadian (lager), Molson Canadian Light, Molson Canadian 67, Molson M, Molson Ice, Molson Golden, Molson Export (ale), Molson Dry, Molson XXX, Stock Ale, Pilsner, Carling, Keystone Lager and Keystone Light, Bohemian and Calgary Export. In Brazil, Molson owns partial stakes in the Brazilian brands A Marca Bavaria and Kaiser, after acquisitions and disposals in 2000, 2002 and 2006. Molson Coors Canada has the marketing and selling rights for Corona brands, marketing and selling rights for Heineken in Canada and markets and sells Miller brands in Canada. Beginning in 2007, Molson Coors announced a joint venture with Miller's parent to create MillerCoors, which handles production and distribution for both companies' American brands in the US market. 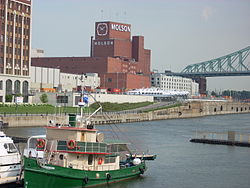 On June 20, 2009, the brothers Geoff Molson, Andrew Molson, and Eric Molson announced the purchase of 80.1% of the Montreal Canadiens from Colorado businessman George Gillett. The Canadiens have historically been the NHL's most successful hockey team. Along with the current majority ownership that the Molson brothers have of the team, the Molson company has owned all or portions of the Montreal Canadiens however the consortium led by the Molson brothers in June 2009 acquired the remaining 19.9% of the team that had been held by the company. Among many sports sponsorships, Molson and/or Coors also have deals with the Montreal Canadiens, Ottawa Senators, Toronto Maple Leafs, Edmonton Oilers, Calgary Flames, Vancouver Canucks, Colorado Avalanche, Phoenix Coyotes and Detroit Red Wings, and their beverages can be purchased at other sports venues, such as the home of the Philadelphia Flyers, the Wachovia Center

In the 1980s and 1990s, the company sponsored auto racing and motorsports events. When the CART Indycar Series and the NHRA Drag Racing Series would sanction events in Canada, Molson would sponsor many of those events.

In 2000 Molson attracted a great deal of media attention with its "I am Canadian" advertising campaign. The original sixty second commercial of Joe Canada tried to define what it means to be Canadian based on many light-hearted and stereotypical images of Canada. This campaign generated much publicity and national pride. The ad campaign received a Bronze Lion award at the international advertising awards in Cannes, France. Since then, Molson has transitioned from their old advertising agency Bensimon Byrne in favour of another Toronto based shop, Crispin Porter & Bogusky, Molson Canadian advertising in the United States is handled by Taxi New York, an advertising firm with Canadian roots.

After the Molson Inc. merger with the American Coors company, on 14 March 2005, the Molson Coors Brewing Company announced that it was retiring its "I Am Canadian" advertising slogan for the new tagline "It Starts Here".[4] Shortly after, a Molson TV advertising campaign started, with Canadian actor Jason Jones portraying an American spokesperson who played upon the stereotypes of American ignorance of Canadian culture. Molson Canadian went through a significant re-staging during the Vancouver 2010 Olympic and Paralympic games where Molson Canadian Hockey House became "the" venue outside of competition venues. The new "made from Canada" advertising caught the hearts, minds and stomachs of Canadians and the brand saw share growth in early 2010. Molson Canadian remains a core strategic brand in the portfolio in Canada.

Molson Coors has launched the world’s only microcarbonated lager in November 2009, calling it Molson M. In order to keep the secret of this injection of Co2 carbonation that results in conserving the taste of the hops better and the flavors generated by the yeast during fermentation, Molson has decided to apply for a patent on the microcarbonation process involved in making the beer.

My beer has been universally well-liked beyond my most sanguine expectations. - John Molson, 1786

"We are all members of a larger community which depends on everyone playing a part," John Molson speaking to employees in 1825

"An honest brew makes its own friends," John Molson, and displayed on Molson Canadian packaging today

Outside of beer and ice hockey, the Molson family were pioneers in steamships, hospitality, assisting with the building of the Montreal Hospital, patrons of the arts, and until 1925, involved in banking too, through Molson Bank which merged with The Bank of Montreal. Molson was once the owner of home improvement chains Beaver Lumber and Aikenhead's Home Improvement Warehouse. In February 1994, Molson sold 75% interest in Aikenhead's to Home Depot Inc for $150 million.[1]