The name Drottningholm (literally meaning "Queen's islet") came from the original renaissance building designed by Willem Boy, a stone palace built by John III of Sweden in 1580 for his queen, Catherine Jagellon. This palace was preceded by a royal mansion called Torvesund.[1]

The Queen Dowager Regent Hedwig Eleonora bought the castle in 1661, a year after her role as Queen of Sweden ended, but it burnt to the ground on 30 December that same year. Hedwig hired the famous Swedish architect Nicodemus Tessin the Elder to design and rebuild the castle. In 1662, work began on the reconstruction of the building. With the castle almost complete, Nicodemus died in 1681. His son Nicodemus Tessin the Younger continued his work and completed the elaborate interior designs.

During the period of the reconstruction, Hedwig was head of the protectorate for the still-underage King, Charles XI of Sweden, from 1660 to 1672. Sweden had grown to be a powerful country after the Peace of Westphalia. The position of the queen, essentially the ruler of Sweden, demanded an impressive residence located conveniently close to Stockholm. 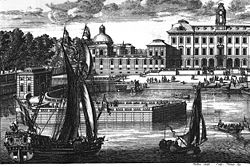 Drottningholm served regularly as a residence for the royal court from ca 1720 until 1792. After the death of Hedvig Eleonora in 1715, Queen Ulrika Eleonora of Sweden and King Frederick I of Sweden held court at the palace until 1744.

The palace was given as a gift to the then Crown Princess, later Queen of Sweden, Louisa Ulrika of Prussia in 1744 when she married Adolf Frederick of Sweden, who became King of Sweden in 1751. During Louisa's ownership of Drottningholm the interior of the palace was transformed in a more sophisticated French rococo style. Louisa was also responsible for having the Drottningholm Palace Theatre rebuilt in a grand style after the more modest original building burnt down in 1762. Louisa Ulrika and her spouse continued to reside at the palace during their regin (1751–1771). In 1777, Louisa sold Drottningholm to the Swedish state.

While it was owned by the Swedish state, king Gustav III of Sweden, son of Louisa, lived in the palace with his court. During the reign of Gustav III, the palace had its grand days and was used as a summer residence, where a ceremonial court life was performed. The court of Gustav IV Adolf of Sweden (reign 1792–1809) and Charles XIII of Sweden (reign 1809–1818) used the palace more sporadically. In 1797, Frederica of Baden was celebrated here with great festivities, and in 1809, the deposed king was kept here under guards in the Chinese parlour for eleven days.

For much of the 19th century, the palace was ignored and started to decay. During the reign of Charles XIV John of Sweden (reign 1818–1844), the palace was abandoned. The king regarded it as a symbol of the old dynasty, and Drottningholm was left to decay. The buildings were severely damaged by the forces of nature, and their inventories were either taken away or auctioned off.

It was apparently opened to the public for the first time during this period: a tour was mentioned in 1819, and people used the park for picnics. Occasionally, the grounds were used for public events, such as the name day of Josephine of Leuchtenberg, which was celebrated on the grounds in August from 1829 onward, or to receive foreign guests, such Josephine herself when she first arrived to Sweden in 1823, and Tsar Nicholas I of Russia.

This saw some change during the reign of Oscar I of Sweden. Oscar I took an interest in the palace and prevented it from being destroyed by doing the first repairs in 1846. Public celebrations were held here, such as a reception for Pan-Scandinavian students in 1856, and in 1858, the future Gustav V of Sweden was born in the palace. Charles XV of Sweden was indifferent to it and did not use it, but Oscar II of Sweden continued the reparations.

Both Oscar I and Oscar II were criticized for modernizing the palace and adjusting it to the fashion of the time rather than restoring it to its original state, and it was not until the reign of Gustav V that the palace and surroundings were reconstructed to their 18th-century appearance. In 1907, a major four-year restoration of the palace was begun to restore it to its former state, after which the royal court began to use it regularly again.

The current Swedish royal family have used Drottningholm as their primary residence since 1981. Since then, the Palace has also been guarded by the Swedish Military in the same fashion as Stockholm Palace.

The palace and its grounds have seen many renovations, changes and additions over the past 400 years. The largest renovation, in which electricity, heating, sewage, water lines were either installed or updated and the castle roof replaced, took place between 1907 and 1913. During a 20-year-period beginning around 1977, several major areas of the palace were restored and rebuilt. The library and national hall received much of the attention and fire protection was installed throughout the palace. In 1997, work began to clean and rebuild the exterior walls. This was completed in 2002. 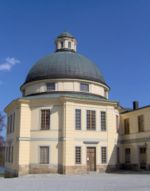 The church was designed and erected by Nicodemus Tessin the Elder. It was completed by his son in May, 1746.

It is used to this day by the people of Lovön parish, who worship in the church on the last Sunday of every month. Inside the castle church a Cahman organ from 1730 is still in use. Another noteworthy item is the traditional church tapestry which was made by Gustaf V of Sweden.

The Drottningholm Palace Theatre is the opera house located at the palace. It is still in use, and its summer opera festivals are quite popular. At times the Royal Swedish Opera company guest performs.

The gardens and park areas surrounding the castle and its buildings are one of the main attractions for the tourists that visit the palace each year.The gardens have been established in stages since the castle was built, resulting in different styles of parks and gardens. 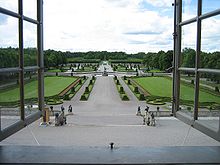 Overview of baroque garden, seen from the palace

The oldest part of the gardens was created at the end of the 17th century under the direction of Hedwig Eleonora. The father and son Tessin led the project that created a baroque garden right outside the main palace, flanked by thick tree avenues. The many statues scattered throughout this area were created by the artist Adrian de Vries. The baroque garden was neglected along with the rest of the grounds during the 19th century, but was restored in the 1950s and 1960s on the initiative of Gustaf VI Adolf of Sweden.

Gustav III of Sweden took the initiative for what is sometimes called the English garden section of Drottningholm. This lies north of the baroque garden and consists of two ponds with canals, bridges, large open sections of grass, and trees in groups or avenues. Walkways are laid out throughout this large part of the park. Throughout this area "vistas" can be seen, cleared lines of sight that are intentionally constructed to draw the eye to a particular view. Most of the antique marble statues throughout the gardens were purchased by Gustav III from Italy. The purpose of the statues is to surprise a visitor by their unexpected appearance in a green area, or as a focal point for a vista.

The palace is a UNESCO World Heritage Site, mainly because of the Drottningholm Palace Theatre and the Chinese Pavilion at Drottningholm. It was added to the list in 1991. The UNESCO comments were: