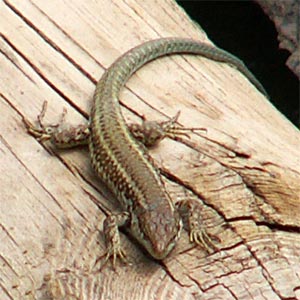 Lacertidae is the family of the wall lizards, or true lizards, which are native to , , and . The group includes the genus "Lacerta", which contains some of the most commonly seen lizard species in Europe.

Lacertids are small or medium-sized lizards. Most species are less than 9 cm long, excluding the tail, although the largest living species, "Gallotia stehlini", reaches 46 cm, and some extinct forms were larger still. They are primarily insectivorous

Lacertids are remarkably similar in form, with slender bodies and long tails, but have highly varied patterns and colours, even within the same species. Their scales are large on the head, which often also has s, small and granular on the back, and rectangular on the underside. Most species are sexually dimorphic, with the males and females having different patterns

At least eight species are Fact|date=August 2008, and three species give birth to live young, including the , "Zootoca vivipara".