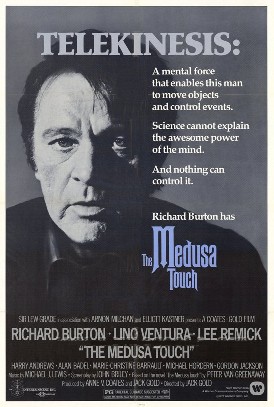 "The Medusa Touch" is a British released in . It starred (), (Zonfeld), (Brunel), (Assistant Commissioner), (psychic), (Morlar's publisher), Gordon Jackson (surgeon) and (Parrish). The was by , based on the novel "The Medusa Touch" by , and the film was directed by .

A French detective, Brunel (Ventura), is on an exchange scheme in . He is assigned to investigate the murder of novelist John Morlar (Burton). As they examine the crime scene, the policemen find that the victim is actually still alive in spite of his heavy injuries and have him rushed to hospital.

With the help of Morlar's journals and Dr Zonfeld (Remick), a whom the author had started visiting, Brunel reconstructs Morlar's past life, which (seen in flashback) is full of inexplicable catastrophes, including the tragic deaths of people he disliked or who offended him.

From his hospital bed he manages to bring down a cathedral on the "unworthy heads" of a VIP congregation giving thanks for the building's preservation; and he seems able to keep himself alive by sheer willpower. An enraged Brunel himself tries in vain to finish Morlar off and fails. The man has written on a pad the name of his next target - the at .

*In the novel, the detective is not a Frenchman but an English character named Inspector Cherry, who appears in several other Van Greenaway books.
*In the novel Zonfeld is male and is a survivor whose experience of contributes to his eventual .
*At the end of the book, Morlar's hand does not scrawl "Windscale" but "", the site of an American base.