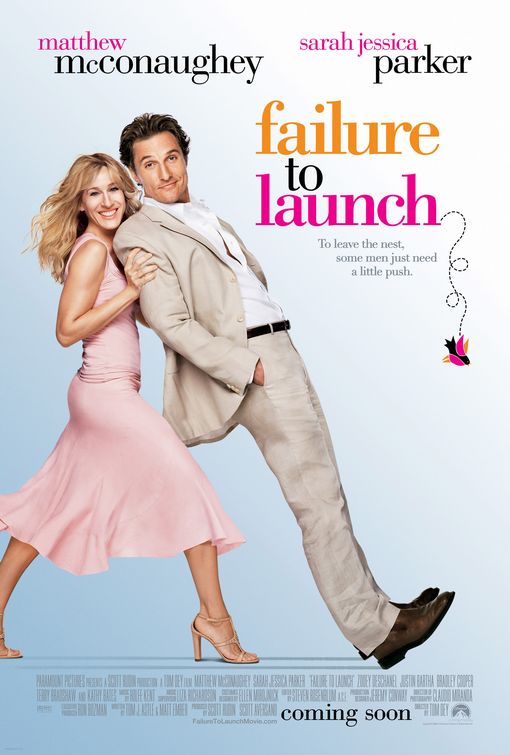 "Failure to Launch" is a 2006 American . It is a loose remake of the French film "Tanguy", being solely based on its premise, the overgrown thirty-something child who does not want to leave home.

The movie opens with Tripp () and Melissa () on a dinner date. Things seem to be going well, until Melissa sees an elderly couple sharing dinner and it prompts her to ask Tripp, "Where is our relationship going?" Tripp says that he sees it going back to his place that night. His place is a lovely two-story home. While they're in the heat of passion in Tripp's bedroom, Tripp's dad Al () walks in without knocking. Melissa, as well as being embarrassed by Al introducing himself and shaking hands with her while she's holding the covers up over herself, is angry that Tripp still hasn't moved out from his parents' house, and storms out. Tripp doesn't seem too upset about it. Al, and Tripp's mom Sue (), are shown listening to her leave as if it's a common occurrence.

The next morning, while Tripp is in the bathroom, Sue makes his bed, vacuums his room, picks up his dirty clothes and leaves his clean laundry for him. She also makes him pancakes, eggs, and bacon for breakfast. Tripp meets up with his buddies, Demo () and Ace (). They also still live with their parents. While they do yoga, Tripp reveals Melissa left him the night before. It turns out that whenever Tripp feels a girl is getting too serious in the relationship, he lets her find out he still lives at home and that's when the girl usually leaves him. Ace says that Tripp is scared of love, while Demo and Tripp seem to agree that living with their parents should be admired - not criticized.

Al and Sue discuss with other people their age at a barbecue complaining that Tripp won't move out. All of the other people there have adult children living at home too - except the couple hosting the barbecue. They admit that their son, Dougie, moved out and they couldn't be happier. Al and Sue ask how they got him to move out and they explain they introduced him to "the right woman".

Next, Al, Sue, and Tripp are in a furniture store. Al and Sue are arguing about what recliners to buy when Paula () walks in and catches Tripp's eye. He walks over to where she is settling into a recliner and closing her eyes. He asks what she's doing and she explains she comes into the store everyday to relax for 20 minutes. Paula gets Tripp to ask her out and they make a lunch date.

Paula then meets with Al and Sue. The parents have hired her to motivate Tripp to move out. Paula is the same woman that Dougie's parents hired to get him to move out. She thinks that men still living at home lack self-esteem so she establishes a relationship with the man, builds his confidence up and they move out of their parents' house. Paula has a set of rules she follows while doing her job. She pretends to like what the guy likes, she allows him to help her through a crisis, she meets his friends, and she lets him teach her something.

Their date is lunch on a docked sailboat that Tripp claims to own. Just as they start to eat, Tripp starts panicking and throws their food overboard. Turns out, he's just a boat dealer and the actual owner is coming down the dock. Tripp and Paula cover pretty well as Paula pretends to be interested in buying the boat. Tripp is impressed she knows boat lingo and everything.

In the meantime, Paula's roommate, Kit () is completely annoyed by a mockingbird outside her window, and references the book, .

Tripp, Demo, and Ace are doing various exercise activities (biking, surfing, etc.). All the while, docile animals keep attacking Tripp. He gets bitten by a chipmunk and attacked by a dolphin.

In the "help through a crisis" part of Paula's plan, she pretends that she's getting her dog put to sleep. During the "meet his friends", segment, Paula impresses Demo and Ace with her paintball abilities. Tripp teaches Paula to sail also. Eventually, he gets worried things are getting serious so he takes her home to meet Al and Sue. She plays it cool and acts like it's not a problem that he lives at home. That night, she sleeps with him while Al and Sue are in the house. Paula is beginning to fall for Tripp.

Paula takes on a new client, a techie guy () and is meeting with him at a coffee shop where Ace sees them. He thinks Paula is cheating on Tripp, so she explains what is going on. In order for Ace to keep quiet, she promises him a date with Kit. On Ace and Kit's date, things aren't going well until Ace tells Kit he has a BB gun and can probably help her with the mockingbird problem. They shoot the mockingbird but then freak out and save it by performing CPR. They end up having sex afterwards.

At a baseball game with Tripp, Demo, and Jeffrey, Paula is really enthusiastic about the game. Tripp takes Jeffrey to get ice cream and Demo lets Paula know that Ace told him everything. Demo explains that Jeffrey is not Tripp's nephew, but he's the son of the woman that Tripp was engaged to a few years ago, but who died before they were married. Paula feels awful and decides she needs to quit the job due to ethics.

Later on, Demo tells Tripp that Demo told Paula about his fiancé and about how Paula was hired by Al and Sue to date Tripp. That night, Tripp makes a big dinner for Paula, Al, and Sue, and makes a speech about Paula and him moving in together. He wants Paula to move into Al and Sue's house with him. He then reveals that he knows everything and storms out of the house. Paula tries to stop him, but he never wants to see her again.

Tripp is moping around for a couple weeks and the guys convince him to go rock-climbing. While rock-climbing, Tripp is bitten by a vegetarian lizard and falls 40 feet. When he comes to, Demo says that the reason these docile animals are attacking him is because Tripp, by still living with his parents, is not following the path nature wants him to (it turns out that, due to various technicalities, none of Trip's friends actually live with their parents). The guys want him to get back together with Paula.

Tripp stops at his parents' house to pick up some things and he makes up with them. Al is enjoying his "naked room", by walking around naked and taking care of his aquarium. He couldn't have the naked room while Tripp was there. Sue explains that she's a little scared of not having Tripp there as a buffer between her and Al.

Paula, in the meantime, is moving to Colorado. Al, Sue, Kit, Ace, Demo, and Jeffrey all have a meeting to make a plan to get Paula and Tripp together. The day that Paula is leaving, Kit offers to take her to the airport. On route to the airport, they stop at Ace's house and Kit locks Paula inside. Tripp is tied up in the closet with tape over his mouth. The two are forced to talk. Ace has set up cameras in the room so everyone can watch on the Internet. Ace, Demo, and Kit are watching on a laptop at a café and Al, Sue, and Jeffrey are watching at home. People in the café are becoming curious, so Ace hooks it up to broadcast on the big-screen at the café. Paula and Tripp make up and everyone is happy.

Paula and Tripp are sailing on Tripp's new boat the "Miss Paula". Paula turns the boat too fast and knocks Tripp overboard. While Tripp is in the water, a dolphin approaches and Tripp is obviously freaked out from his previous meeting with a dolphin. Instead of attacking Tripp, the dolphin lets him pet him and swims around him happily. Tripp is now following nature's course so all is right with the world!

The movie ends with a cut to Al and Sue back at home, in bed, singing "", overjoyed to finally have their empty nest.