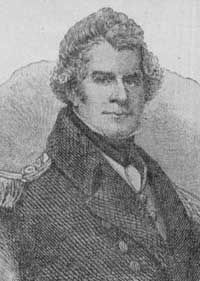 Six years later, in 1818, he received the command of an Arctic expedition organised by the , the first of a new series of attempts to solve the question of a . This entailed going around the extreme northeast coast of America and sailing to the . He was also to note the currents, tides, the state of ice and magnetism and to collect specimens he found on the way. In April of that year, Ross left with two ships, and in August reached , in .

There he re-examined the observations , a previous British explorer, had made two hundred years before. But Ross went no further, for he suffered from mirages that appeared as mountains at the end of the strait. He named them "Crocker Hills," and returned to England despite the protests of several of his officers, including First Mate and . [ [http://www.collectionscanada.gc.ca/2/24/h24-1810-e.html John Ross - The Arctic and More - 19th Century - Pathfinders and Passageways ] ] The account of his voyage, published a year later, brought to light their disagreement, and the ensuing controversy over the existence of Crocker Hills ruined his reputation.

This expedition failed to discover much that was new, and somewhat prejudiced the Arctic reputation of its leader, who attained the rank of captain on his return.

In 1829, Ross admitted he may have been wrong, and convinced one of his friends, Mr (afterwards Sir) , to finance a second expedition. He left in May of that year, this time on the "Victory", a side-wheel steam ship. [cite book |title=Ordeal by ice; the search for the Northwest Passage |last=Mowat |first=Farley |authorlink= |coauthors= |year=1973 |publisher=McClelland and Stewart Ltd |location=Toronto |format=Winter Without End |pages=186 |oclc=1391959] They sailed past Lancaster Sound to a previously unexplored area, where their ship became stuck in the ice. The crew was stranded for four years, during which they explored the regions to the west and north, with the help of local Inuit. On one of these explorations, Ross found the magnetic on the .

In 1832, Ross and his crew abandoned their ship and walked to another shipwreck which had been abandoned by a different expedition many years earlier. A year went by before a break in the ice allowed them to leave, on that ship's longboats. They were eventually picked up by a British vessel and taken home. "This impressive experience, as well as the scientific and ethnological information gathered by Ross's team, brought him the renown that he had long sought." [ [http://www.collectionscanada.ca/2/24/h24-1810-e.html Library and Archives Canada] ] However, Ross encountered controversy again with his cartography. His nephew, Commander (later Sir) charted three islands in and named them Beaufort Islands in 1830. John Ross never saw the islands, but charted 8 or 9 and named them . [Ross 1994:195] [Bossi 1984:571]

Captain Ross received gold medals from the English and French geographical societies, and various foreign orders, including a knighthood of the Pole Star of Sweden, and in the following year (1834) received a knighthood and a CB in Britain.

In 1850, he undertook a third voyage to the Arctic regions, this time in search of the missing expedition party of Sir . He did not find them. In the following year he attained flag-rank. Upon returning, he settled in Scotland, and died in London in 1856.