Evatt was formally referred to as Dr H. V. Evatt, but was informally known as "Bert" or "Doc" Evatt. 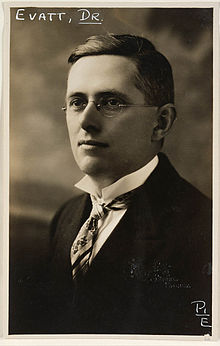 Evatt was born in Maitland, New South Wales, son of John and Jeanie Evatt, and elder brother of Clive Evatt. The family was working-class of British and Irish origin. He was never called Herbert: his family called him Bert, everyone else called him Doc.

Due to poor eyesight, Evatt was unable to serve in the First World War, in which two of his brothers were killed. He became a prominent industrial lawyer in Sydney, working mainly for trade union clients.

In 1930 the Scullin Labor government appointed Evatt as the youngest-ever justice of the High Court of Australia. Regarded by some as a brilliant and innovative judge, he delivered a number of minority judgements, several of which were decades later adopted by High Court majorities. Evatt could, however, be partial on the bench. Sir Owen Dixon noted in one instance how Evatt was "full of antagonism to the respondent ... Most unjudicial."[1] It is noticeable, upon examination of the Commonwealth Law Reports for the 1930s, that when Evatt was not particularly interested in a case he generally went along with Dixon's judgment.[2]

Evatt was one of six justices of the High Court to have served in the Parliament of New South Wales, along with Edmund Barton, Richard O'Connor, Adrian Knox, Albert Piddington and Edward McTiernan.

In 1934 Evatt played an important part in the Egon Kisch exclusion when he ruled that the Lyons Government's ban on Kisch entering Australia had been incorrectly executed and that he was free to enter the country.[3]

In several matters, Robert Menzies, the Attorney-General in the Lyons conservative government, appeared before the court, where he and Evatt had several colourful exchanges on questions of law. This was the beginning of a life-long mutual dislike.

In 1940 Evatt resigned from the High Court to return to politics, and was elected federal MP for the Sydney seat of Barton in the House of Representatives. When Labor came to power under John Curtin in 1941, Evatt became Attorney-General and Minister for External Affairs (Foreign Minister).

Evatt joined the diplomatic councils of the allies during World War II, and in 1945 he played a leading role in the founding of the UN. He was President of the U.N. General Assembly in 1948–49, and was prominent in the negotiations which led to the creation of Israel. He helped draft the United Nations Universal Declaration of Human Rights and was also the first chairperson of the Atomic Energy Commission. He became deputy leader of the Labor Party after the 1946 election, supporting Ben Chifley.

While in London Evatt acted as the spokesperson for the Australian Board of Control and made personal representations to the Marylebone Cricket Club who were reluctant to send a cricket team to tour Australia so soon after the war. He put forward convincing arguments as to the need to re-establish sporting relations and the financial benefits of the tour and the MCC agreed to the 1946–47 Ashes series.[4][5] Don Bradman later said that "The quick resumption of Anglo-Australian Tests had justified itself in every way, psychologically, technically, financially".[6]

Leader of the Opposition

In the 1949 election, Labor was defeated by Menzies' new Liberal Party. When Ben Chifley (still Labor leader) died suddenly in 1951, Evatt was elected unopposed as his successor. At first his leadership went rather well, and he campaigned successfully against Menzies' attempt to amend the Constitution to ban the Communist Party. Many convinced anti-Communists in the Labor Party believed this was both bad politics and bad policy, because of the active Communist infiltration of numerous trade unions, and because of the threat to national security posed by communism. Still, none of these Labor men except the firebrand Stan Keon overtly censured Evatt's stance.

Evatt's failure to win the 1954 election led him to blame the Catholic-dominated Industrial Groups in the party for sabotaging his campaign. He was also convinced (wrongly, as primary sources afterwards revealed) that Menzies had conspired with the security services to bring about the defection of a Soviet diplomat (see Petrov Affair), and, moreover, to do so with the specific purpose of discrediting Evatt. Documents shown to the commission members were alleged to provide evidence of an extensive Soviet spy ring in Australia, and named (among many others), two of Evatt's staff members. Evatt appeared before the Royal Commission as attorney for his staff members. His cross-examination of a key ASIO operative transformed the commission's hearings and greatly perturbed the government. Almost immediately, the Royal Commission simply withdrew Evatt's leave to appear. Evatt alleged that this denial was this result of judicial bias towards the Menzies government.

After the election, Evatt launched a public attack on "The Groupers", which precipitated a disastrous split in the party, with most of the "Groupers" leaving or being expelled. The disaffected formed the Democratic Labor Party, which directed its preferences against Labor at subsequent elections. This, together with an obsessive hatred of Menzies which led him into many tactical errors,[7] caused Labor to be heavily defeated at both the 1955 and 1958 federal elections. During the 1958 campaign, at which he transferred to the seat of Hunter, Evatt made a dramatic offer to resign as leader if the DLP would return to the party, but the offer was rejected. 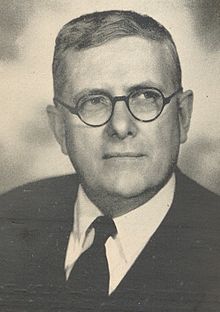 In 1960 the Labor government in New South Wales appointed Evatt Chief Justice of the Supreme Court of New South Wales, an appointment that was widely seen as a means of giving him a dignified exit from politics.[8] His career as Chief Justice was undistinguished and erratic, lacking the legal insight he had exhibited as an academic and High Court justice.[citation needed] Tom Hughes, a leading Sydney barrister and former Liberal Attorney-General, has claimed that all of the judgments Evatt gave in this period were co-authored with a judicial colleague.[9]

Recent biographies of Evatt agree that his behaviour became more eccentric from the late 1950s. Pat Fiske and David McKnight, in their 1995 television documentary Doc, attributed what they described as Evatt's "deteriorating mental functioning" to arteriosclerosis.[10] In 1962 Evatt suffered a mental breakdown, and was persuaded to retire from the bench. He died in Canberra in November 1965.

During his life he had a varied career as a writer, covering such topics as law and labour history. His book on the politics of the Rum Rebellion is still considered highly relevant, although others such as Michael Duffy disagree with Evatt's view.[11] He contributed an article on "Cricket and the British Commonwealth" to the 1949 edition of the Wisden Cricketer's Almanack.