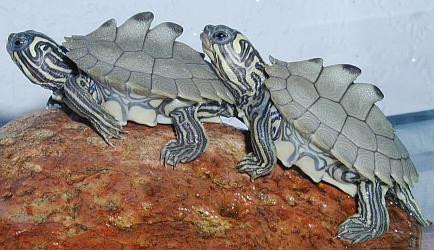 The Emydidae are the largest and most diverse family of .

The family Emydidae includes more than 40 in 12 . Members are distributed throughout , northern , , northwestern , and . Emydids are primarily species, though some species inhabit s "(Malaclemmys terrapin)" or are terrestrial (, except "T. coahuila").

Sizes are variable and range from only convert|11|cm|in "()" to nearly convert|60|cm|in "()" in length. Coloration is also quite variable. The family does not have a distinguishing suit of superficial characters, although they all have well-developed limbs with webbed feet. In most species, the carapace is low-arching, but some have a higher dome. The is hinged and movable in some, while fixed in others. There are few distinctive skeletal features, but there is a lack of contact between the and s in the skull, and the the forms part of the orbit.

Food habits range from strictly to strictly . The carnivores feed on s, s, and fish. In several species, there is a shift from carnivory in juveniles to herbivory in adults. Small mammals, especially s, are responsible for the destruction of many Emydid nests. Members of all vertebrate classes predate eggs and hatchlings. The wide range of sizes in mature animals leads to an assortment of predators. While s are responsible for predation in some smaller species (e.g., "Clemmys muhlenbergii"), they cannot eat larger species. s pose a risk to adults of several species, but humans are chiefly responsible for the deaths of adults either through collection for food or the senseless shooting of basking animals.

Knowledge of reproductive behavior ranges from some of the most detailed, long-term study of any ("Chrysemys picta" in Michigan) to a total lack of information. In many species, dimorphisms include elongated foreclaws or a concave plastron in the male. The longer claws are used in a courtship routine in which the male faces the female and fans her face. The concave plastron allows the male to mount females in species with more domed carapaces (e.g., Terrapene). Reproduction is on an annual cycle, and multiple clutches may be produced in a single season. Clutch size is quite variable, ranging from as few as two to more than 30 eggs.

Threats to the Emydidae

Emydids are the principle turtles sold through the pet trade. The pond slider "(Trachemys scripta)" has expanded its range through the careless release of pets into the wild. Many Asian species are threatened by over-collection of animals for sale in markets and into the pet trade. The North America species "Clemmys muhlenbergii" is listed as an Appendix II species by and is considered threatened or endangered in many states. This status is the result of habitat degradation and over-collection.

The Emydidae are most closely related to the (Testudinidae) and are included along with that family in the . Shared features include a lack of inframarginal s, the shape and muscle attachment of the ilium, and the shape of the eighth (biconvex). Within the Emydidae, two subfamilies were recognized along biogeographic lines. The Emydidae as understood today contain New World species (except ""), while the former Batagurinae, today a separate family , contain Old World species (except ""). Osteological characters, such as the construction of the and articulations of the cervical vertebrae distinguish the two families.

The enigmatic ("Platysternon megacephalum") was for some time considered a specialized but still very primitive early offshoot of the Emydidae. But with the geoemydidae being split off it is better reinstated as its own family Platysternidae, though it seems very close to the emydid-geoemydid group.

Presumed emydids are well-represented in the record. "" and "" are both North American species that date from the and , respectively. These are the two oldest fossil species. Many other extinct species traditionally placed in the Emydidae are known from the of North America, Asia and Europe, but the Old World are likely to be more properly . The North American genus "" and probably the trans- "" too would seem to be Emydidae, but their precise relationship to the living genera are indeterminate.