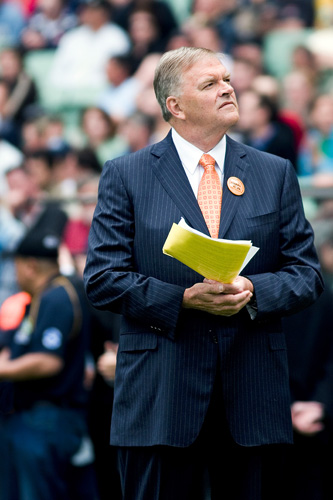 Beazley was a minister under from 1983 to 1991 and under from 1991 to 1996. He was in 1995-1996. Elected Labor Leader in March 1996, he resigned in November 2001 after having lost both the 1998 federal election (despite gaining 51 per cent of the vote, the party fell 7 seats short) and the 2001 election. He was returned unopposed to the Labor Party leadership in January 2005 following the resignation of , who polled worse figures at the 2004 election. He is the only ex-leader in the party's history to return to the position. He was replaced as party leader by in December 2006, a year prior to the 2007 election which Rudd and Labor won with a significant swing.

Beazley was born in Perth, . His father, also called Kim Beazley and now generally known as Kim Beazley senior, was Labor MP for Fremantle from 1945 to 1977. His mother was a former Australian athletics champion and record-holder.

The younger Kim was educated at Hollywood Senior High School and then later at the and (Rhodes Scholar 1973), where he gained a Master of Philosophy degree. While at Oxford, he became close friends with and (a former and former respectively). After returning to Australia, he tutored and lectured in politics at Perth's before being elected MP for the seat of Swan at the 1980 election.

Beazley became a protege of Bob Hawke, Labor leader from 1983, and in that year he was appointed Minister for Aviation in Hawke's first ministry. He was Minister for Defence, with a seat in Cabinet, 1984-90 [ [Toohey,Brian (7 July 2002). Security proves a complicated affair] http://www.smh.com.au/articles/2002/07/06/1025667073297.html] . In this role he was responsible for establishing the Australian Navy's submarine program, which was beset with some technical problems and cost over-runs (see ). Beazley has had a lifelong interest in military matters; his consequent enthusiasm for this portfolio, and particularly for military hardware, earned him the nickname "Bomber Beazley".

Beazley was then Minister for Transport and Communications (1990-91), Finance (1991), Employment, Education and Training (1991-93), and Finance again (1993-96). He supported Hawke in his leadership battles with in 1991, but retained his position when Keating deposed Hawke and became Prime Minister in December 1991. Beazley was Deputy Prime Minister 1995-96. At the 1996 elections Beazley shifted to the safer seat of Brand, south of Perth.

In 1996, on the defeat of the Keating government by , Beazley was elected unopposed as Labor leader and became Opposition Leader. He campaigned against Howard's (GST) but lost the October 1998 elections by a narrow margin. Labor polled a majority of the two-party vote and received the largest swing to a first-term opposition since 1934, but failed to win enough seats in the House of Representatives.

In mid-2001 Labor was well ahead in the opinion polls and seemed set to win the election due at the end of the year, but in August a political crisis erupted when the Howard government refused to allow the , a Norwegian freighter, to set down on Australian soil at several hundred whom the crew had rescued from an unseaworthy boat in international waters. When the November 2001 election was announced, Howard had taken a commanding lead in the polls and seemed set for a huge victory. But Beazley's dogged campaigning regained some of this ground and Labor suffered a net loss of only four seats.

Beazley resigned the Labor leadership after the election and was succeeded by . But by 2003 Crean had failed to make any headway against Howard and Labor MPs began to fear that Howard would easily win the election due in 2004. Crean's opponents persuaded Beazley to attempt a return to the leadership by challenging Crean. The Labor (parliamentary Labor Party) re-elected Crean in June 2003, not convinced that Beazley offered a better alternative. Some Beazley supporters, most notably , continued to plot against Crean, and Beazley refused to rule out a further challenge.

On Crean's closest supporters told him that he had lost their confidence, and the next day he announced his resignation. Beazley immediately announced that he would be contesting the leadership when the Labor Caucus met on . His only opponent was the party's economic spokesperson, . Latham defeated Beazley by 47 votes to 45. After the ballot, Beazley announced that he would remain in politics as a backbench member and would recontest his seat at the 2004 election.

In July 2004, however, Latham arranged for Beazley to return to the Labor front bench as Shadow Defence Minister. This followed controversy over Latham's policy of withdrawing Australian troops from by the end of 2004. Beazley's return to the front bench was generally seen as a move by Latham to reassure Australian public opinion that a Labor government would not put the U.S.-Australian alliance at risk.

After Labor's defeat in the October 2004 federal election, at which he became the longest-serving Labor member of the Parliament, Beazley again returned to the backbench, saying "my time as leader of the Labor Party has come and gone, it's over for me as far as leadership is concerned". But after Latham resigned as leader on , , Beazley announced his intention to contest the leadership, saying that he was "absolutely fired with ambition."

Referring to widespread doubt that Labor could win the 2007 election under a leader who had already lost two elections, Beazley said: "There's no doubt in my mind that I can lead a winning team in the next election. The road to the prime ministership of this nation is a long and hard road. It's not an easy one. And there are many twists and turns on that road. I'm in my 25th year as a member of the Federal Parliament and I know this: public opinion is volatile and it can change."

Beazley was re-elected as federal Labor Leader when the Labor Caucus met on , following the withdrawal of the other potential candidates, and . [cite web
title = Gillard gives Beazley clear run at leadership
publisher = ABC News
date =
url = http://www.abc.net.au/news/newsitems/200501/s1289217.htm
accessdate = 2006-12-04 ] Labor hoped that Beazley could follow a similar course to John Howard, who failed in his first term as Opposition Leader but returned in 1995 for a second term and then won the 1996 election.

In September 2005, the publication of Mark Latham's "" contained comments by Latham to the effect that Beazley was a "dirty dog" and was not fit to "clean toilets in Parliament". Latham's abuse resulted mainly from two allegations: firstly that Beazley had engaged in a prolonged campaign to undermine Latham in his positions as a and as opposition leader and; secondly that Beazley (as leader) had failed to provide support to Labor MP , who later committed suicide. All of these allegations were vehemently denied by Beazley, his supporters and others.

In the first half of 2006, Beazley focussed much of the Labor Party's parliamentary inquiry into the (AWB) scandal, which allegedly involved bribes and kickbacks with the then Iraqi dictator, , that universally breached UN Sanctions, to which Australia was a signatory. The situation reached climax in the aftermath of Treasurer 's 2006 Budget, whereby for the first time in recent Australian political history, the opposition leader and his colleagues ceased inquiry on the budget papers after just six questions, before resuming further questioning on the AWB scandal. The media criticised the ALP, [cite web
first=Catherine
last=McGrath
title = Budget reply a tough test for Beazley
publisher = PM
date =
url = http://www.abc.net.au/pm/content/2006/s1636514.htm
accessdate = 2006-12-04 ] although many ministers acknowledged the need for the Government to be held accountable for the AWB scandal. These tactical deficiencies plagued Beazley's return to the leadership and were amplified by factional infighting in the broader Labor Party, raising many questions concerning both his ability to lead and the stability of the party. At the time, opinion polls by ACNielsen and Newspoll on preferred leader had him at record lows. This was confirmed in a forum on the SBS Insight television program on , [cite web
work=Insight
title = Labor Pains
publisher =
date =
url = http://news.sbs.com.au/insight/topic.php?id=93
accessdate = 2006-12-04 ] which specifically dealt with the Labor Party's political struggles, where some community members voiced their concerns about being disillusioned with Kim Beazley, and a lack of understanding of the values and policies for which he and the party stood. While Beazley admitted that winning an election was difficult, he was adamant that the 2007 election would be a "referendum on the Howard Government's unfair industrial relations laws."

After the mid-term parliamentary break, Beazley's fortunes slightly improved, with voter concern over interest rate rises, petrol prices and industrial relations giving Labor some electoral comfort. This was later evident in polls which suggested the ALP's primary vote was at around 40 per cent - the minimum considered necessary to gain government. However, polls concerning preferred leader still positioned Kim Beazley well below John Howard. Conservative political commentator, , suggested in the "" on , that Beazley's poor performance in leadership polls was to do with alleged inconsistencies in policy and judgement, particularly with regard to the Iraq war.

With continued weak performances in preferred Prime Minister opinion polls, 2006 was punctuated by a number of embarrassing gaffes from the opposition leader. At a press conference on 17 November 2006, Beazley confused the grieving TV host with President Bush's Chief of Staff, , offering his sympathy to the wrong Rove.

A ballot was held on Monday , and Kevin Rudd was declared the winner and leader of the ALP, by a margin of 49 votes to 39. [ cite web
first = Phillip
last = Hudson
title = Beazley's black Monday
publisher =
date =
url = http://www.smh.com.au/articles/2006/12/04/1165080849091.html
accessdate = 2006-12-04 ] After the leadership results were announced, withdrew from the contest for deputy leader, which allowed Gillard to be elected unopposed to that position.

Following the ballot, Beazley said of his political future, "For me to do anything further in the Australian Labor Party I would say is with a quadruple bypass. So the time has come for me to move on but when that gets properly formalised I will let you know." [This refers to 's response to a journalist's question after his loss of the leadership of the Liberal Party to on . The journalist asked, "Do you see yourself as having another chance at the leadership at some future time?" and Howard replied: "Oh, that'd be Lazarus with a triple bypass". From cite web
title = Howard's Way
work= Sunday
publisher =
date =
url = http://sunday.ninemsn.com.au/sunday/cover_stories/transcript_331.asp
accessdate = 2006-12-04 ] It was also revealed that his brother David had died of a severe heart attack at age 53, shortly before the vote took place. [cite web
title = Tearful Beazley bows out
publisher =
date =
url = http://www.theage.com.au/news/national/rudd-ousts-beazley/2006/12/04/1165080846679.html
accessdate = 2006-12-04 ]

He is currently a professorial fellow at the University of Western Australia, focusing on politics, public policy and international relations.