Members of the Israel Philharmonic Orchestra rehearse at the Jamshed Bhabha theater, NCPA before their performance

The National Centre for the Performing Arts (NCPA), in Mumbai, India was established with a grant of Rs 4 million from the Sir Dorabji Tata Trust. This was later supplemented by donations from the corporate sector. Registered as a society on June 8, 1966, NCPA has also been established as a public trust, whose principal objective is to serve the cause of the performing and allied arts.

Initially, established at a temporary setup at 89 Bhulabhai Desai Road, which housed a small auditorium, listening rooms and practice facilities, inaugurated by Prime Minister Indira Gandhi on 29th December 1969. Meanwhile, the 8-acre (32,000 m2) are was built on reclaimed land at Nariman Point where it is located today.[1]

The NCPA is also the home of the Symphony Orchestra of India. 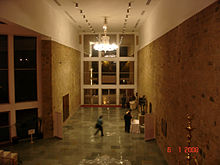 The NCPA complex occupies an area of about 32000 m2 at Nariman Point, on land reclaimed from the sea.

The three main facilities at the NCPA include the 1109 seater Jamshed Bhabha Theatre, the 1010 seater Tata Theatre and the 300 seater Experimental Theatre.

Membership of the Performing Arts Circle (PAC) is open to students, professionals and lovers of art. NCPA presents 40 to 50 events in its various spaces every month. Nearly half of these are free for members of the PAC. Members of the PAC have free access to the well-equipped reading and listening library of the NCPA.