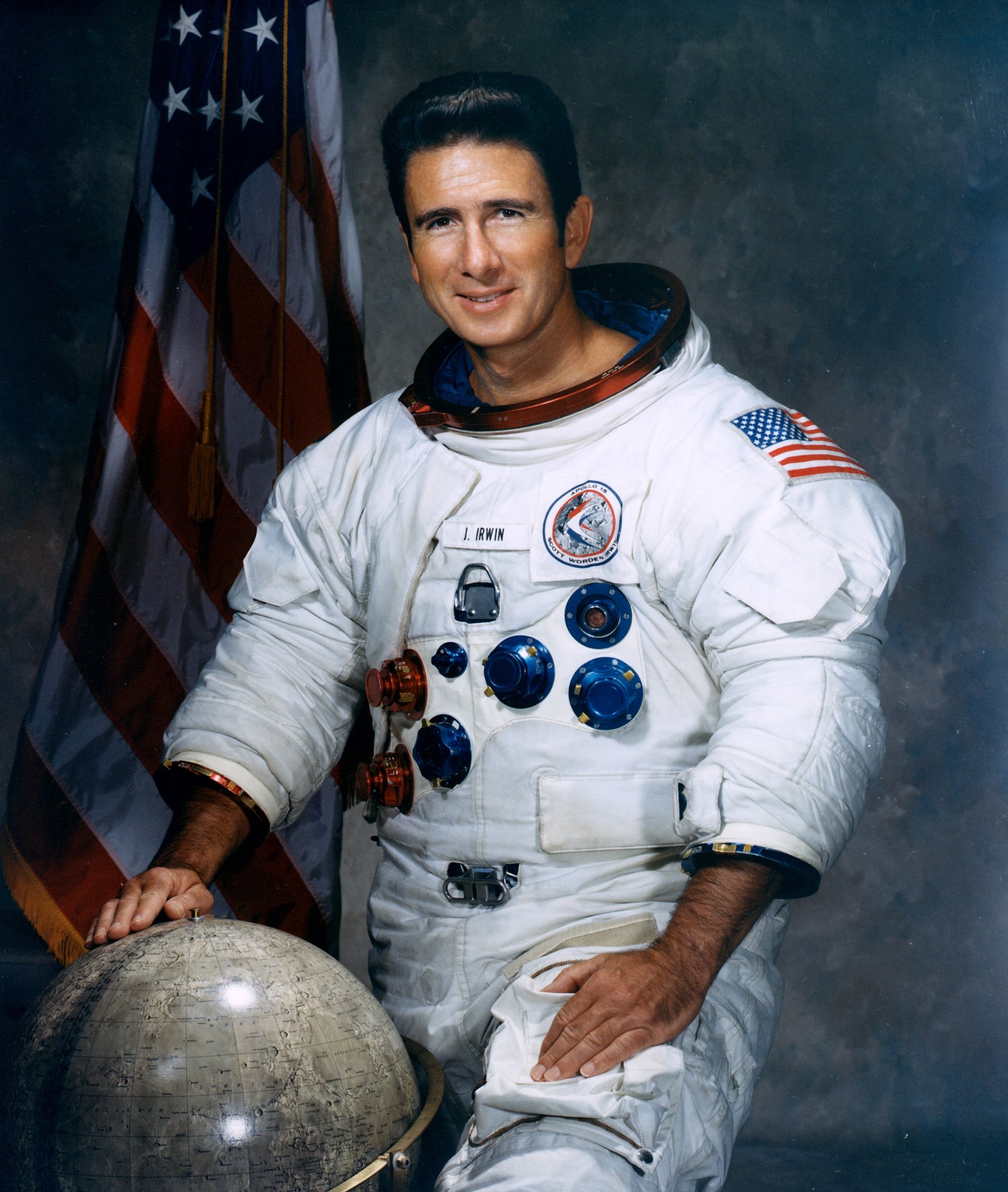 James Benson Irwin (, &ndash; , ) was an American astronaut. He is of Scottish and Irish descent. He served as Lunar Module pilot for , the fourth human lunar landing; he was the eighth person to walk on the Moon.

Irwin was born in Pittsburgh, .

James Irwin was one of the 19 s selected by NASA in April 1966. He also served as a member of the astronaut support crew for , the first mission to carry the full Apollo stack to the moon, and was the dry run for the first manned . He then served as backup lunar module pilot for the second moon landing mission, .

Between and – as the Apollo 15 Lunar Module Pilot (LMP) – Irwin logged 295 hours and 11 minutes in space. His (EVA) on the Moon's surface amounted to 18 hours and 30 minutes of the mission time (an additional 33 minutes was used to do a stand-up EVA by opening the LM's docking hatch to survey the surroundings and take photographs).

Apollo 15 landed in the Moon's Hadley-Apennine region, noted for its mountains and s. Since this was a J-Mission, it meant that they would spend more time on the moon than previous missions, to allow for three EVAs. As well, Irwin was the first automobile passenger on the moon, since he was not the driver of the (LRV) carried along for this mission in the (LM) Falcon's Descent Stage. Scott and Irwin's stay on the Moon was just under three days at 66 hours and 54 minutes.

Once the rendezvous procedure was completed between Falcon and the Endeavour CSM, both Irwin and Scott were busy moving items like rock samples into the CM and preparing the Lunar Module for final separation.It was during this intense period of work that the earliest symptoms appeared regarding his heart condition.

Both Scott and Irwin were working with no sleep for 23 hours, during which they had conducted a final moonwalk, performed the ascent from the lunar surface, rendezvoused with Endeavour, and encountered the problems that delayed the Lunar Module jettison manoeuvre.

During the post- (TEI) phase of the mission there wasn't much more for Irwin to do other than provide help with 's EVA to retrieve film magazines from the CSM's SIM bay, by donning a pressure suit and monitoring him. He was able to rest and apparently recover during the rest of the mission.

After the return of Apollo 15 to Earth, it was discovered that, without authority, the crew had taken 398 commemorative first day covers to the moon of which a hundred were then sold to a German . The profits of the sale would have been used establish trust funds for the Apollo 15 crew's children. Although their action was not in any way illegal, and despite the fact that NASA had turned a blind eye to similar activities on earlier flights, the administration decided to make an example of Scott and his crew and none of them flew in space again.

Beyond his achievements as an with NASA, Irwin is perhaps most notable for his work. He left NASA and retired from the Air Force with the rank of in 1972 and founded High Flight, a Christian ministry. He frequently commented about how his experiences in space had made the presence of even more real to him than before.

Beginning in 1973, Irwin led several expeditions to , in search of the remains of . His expeditions failed to find any sign of the Ark. In 1982, he was injured during the descent and had to be transported down the mountain on a horse and then to the nearest hospital by Lieutenant Orhan Baser and his commando team. Lieutenant Baser was assigned to protect and lead the team on this expedition.

Irwin suffered a serious heart attack near his home in , . He died on , as the result of a subsequent heart attack in , Colorado. He is survived by his wife Mary Ellen and their five children. Irwin is the first of the twelve men who have walked on the moon to die.

In the 1998 miniseries "From the Earth to the Moon" Irwin was played by Gareth Williams.

In the 2002 novel "Ice", James Irwin walks on the Moon a second time, as the LM Pilot of a fictional Apollo 20 mission sent to the Moon with the original objective of recovering the remains of two astronauts who were stranded when their LM ascent engine failed to fire. No such mission was ever necessary. In the 1989 novel by , "A History of the World in 10½ Chapters", the character Spike Tiggler is also an astronaut who searches for Noah's Ark.

James Irwin Charter High School in Colorado Springs is named in his honor.