On Ilkla Moor Baht 'at

On Ilkla Moor Baht 'at 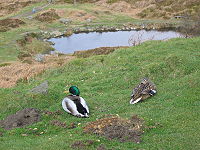 Ducks on Ilkley Moor, as in the song.

On Ilkla Moor Baht 'at (Standard English: On Ilkley Moor without a hat) is a popular folk song from Yorkshire, England. It is sung in the Yorkshire dialect, and is considered the unofficial anthem of the county.[1] According to tradition, the words were composed by members of a Halifax church choir during an outing to Ilkley Moor near Ilkley, West Yorkshire. [2]

The song tells of a lover courting the object of his affections, Mary Jane, on Ilkley Moor without a hat (baht 'at). The singer chides the lover for his lack of headwear – for in the cold winds of Ilkley Moor this will mean his death from exposure. This will in turn result in his burial, the eating of his corpse by worms, the eating of the worms by ducks and finally the eating of the ducks by the singers.

The Yorkshire Dictionary (Arnold Kellett, 2002) stated that the song (i.e., the lyrics) probably originates from the Halifax area, based on the dialect used in the song, which is not common to all areas of Yorkshire.

The title is seen in various transcriptions of Yorkshire dialect, but is most commonly On Ilkla Mooar [or Moor] baht 'at, i.e. "On Ilkley Moor without [wearing] a hat". The song's origins are believed to be as a ditty to poke fun at a courting couple, as sung by a mischievous local choir.

The first published version of the words appeared in 1916, when it was described as "a dialect song which, for at least two generations past, has been sung in all parts of the West Riding of Yorkshire".[3] Arnold Kellett calculates that the song "could well have originated in the early years of the second half of the [19th] century, and not as late as 1877 ...".[4]

Sung to the old Methodist hymn tune Cranbrook (composed by Canterbury-based shoemaker Thomas Clark in 1805 and later used as a tune for While Shepherds Watched Their Flocks By Night), the song has become so popular that the origin of the music as a hymn tune has been almost forgotten in the United Kingdom.[5] It is still regularly used for the traditional words While Shepherds Watched in some churches including Leeds Parish Church, but is no longer widely recognised as a hymn or carol tune in the United Kingdom.

Cranbrook continues in use as a hymn tune in the United States, where it was not adopted as the tune of a popular secular song and is customarily used with the lyrics of Philip Doddridge's Grace! 'Tis a Charming Sound.[6][7]

Within the lyrics there is one central verse to the song, the first, third and fourth lines are changed with each following verse. All of the verses in the song feature the second, fifth, sixth and seventh lines which are "On Ilkla Mooar baht 'at".

Also in some recitals, after the first two lines of "On Ilkla Mooar baht 'at" it is followed by a "Where's that?". Another variant adds "Howzat?" after the first line and "Not out!" after the second. In Leeds the line immediately before the chorus is often ended with "And we all got wet".

The song has been used in various television programmes: