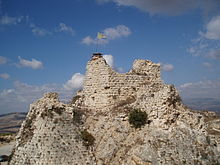 Nabatieh (Arabic: النبطية, Nabaṭīya), or Nabatiye, is the principal town of the Nabatieh Governorate, in southern Lebanon. Nabatieh has approximately 120,000 inhabitants, is the capital of the Jabal Amel area and the chief center for both the mohafazat, or governorate, and the caza, or canton. Nabatieh is an important town both economically and culturally.

A market is held every Monday and traders and visitors from neighboring villages gather in the center of the town to exchange their goods in an area known in Arabic as the Souq Al Tanen. There are also branches of several banks, hospitals, restaurants and cultural centers of interest to tourists. Every year, the city commemorates the Battle of Karbala to remember the martyrdom of Imam al Husayn. During this time of year the town receives tens of thousands of visitors, mainly belonging to the Shiite community, who come to participate in this religious festival.

Nabatieh can boast of being the birthplace of several learned men: the theologian Sheikh Aref al Zein, the scientist Hassan Kamel Al-Sabbah and his uncle Sheikh Ahmad Reda.

On the top of a hill overlooking the southern Beqaa Valley towards Damascus stands Belfort or Beaufort castle, known to Arab travellers as Shqif Arnun, the word shqif being a Syriac term meaning high rock. The castle, although looking inaccessible, can be reached with little difficulty from the village of Arnun, which lies 7 km southeast of Nabatieh. In front of this fortress is a large water cistern and the ruins of an ancient village of a similar antiquity to the castle. There is no conclusive evidence for the age of this castle or for who built it. According to William of Tyre, it was erected by the Crusaders, but some scholars are of the opinion that it is probably older than this. It has been suggested that the fortress was standing when the Crusaders arrived, that it had been built in the late Roman or Byzantine period and later restored and enlarged by the Arabs before becoming a Crusader castle.

The Crusaders repaired and fortified Beaufort Castle during the twelfth century and it became the most important fortress in Lebanon. The Crusader king, Foulques d'Anjou, captured it from the ruler of Damascus and gave it to the Crusader rulers of Sidon in 1138. Saladin besieged it for two years and was able to storm it in 1140. The Crusaders regained control of the citadel in 1190 after they had signed an agreement with Al Salih Ismail, the ruler of Damascus. In 1260 it was bought by the Knights Templar and it remained their property until its conquest in 1268 by the Mamluk Sultan, Al Zahir Baybars. The Templers built a small fort there called Chateau Neuf. Fakhreddin undertook restoration work and re-fortified the castle at the beginning of the 17th century, but a governor of Damascus, Hafez Pasha, besieged the building and partly destroyed it with his artillery.

The castle is almost completely ruined and only the eastern wall, entrance and staircase of a big tower in the middle of the western side survive. On the eastern side is a 13th-century vaulted building, either a church or an assembly hall. To the north are the remains of two towers and of a large cistern which occupies part of the moat surrounding the castle.

Nabatieh has two historic mosques. One was built in the 16th century and lies in the center of the town. Another, known as the “the Mosque of the Prophet,” dates to the Mamluk period and is located in Nabatieh al Fawqa.

The Christian College Notre Dame des Soeurs Antonines is one of the oldest institutions in the city.[1]

The inhabitants of Nabatieh are predominantly Shi'a Muslims, with a significant minority of Greek Catholics. The Nabatieh district has three representatives in the Lebanese government, all belonging to the Shi'a religion, in accordance with Lebanon's sectarian confessional system.