Number 2 is a fictional character in the Austin Powers franchise. He is played by Robert Wagner in all three movies, while his younger self is played by Rob Lowe in The Spy Who Shagged Me. He briefly appears as a teenager in a flashback in Austin Powers in Goldmember, portrayed by Evan Farmer. The character was modeled after the James Bond villain Emilio Largo who was number 2 of SPECTRE in the 1965 James Bond movie Thunderball.

His name is also a pun on the slang term for defecation. After one of Dr. Evil's henchmen attempts to assassinate Austin Powers in the bathroom stall, Austin Powers grunts and drowns him in a toilet and issues the exchange:

Number 2, as his name implies, is the second-in-command of Dr. Evil's empire, and was also ranked second only to Evil in test grades during their school years. He wears an eye patch over his right eye. He can still see through the right eye, though; In the first film, he used the patch as an X-ray to see what playing card was at the top of a pack. He oversees the finances of the companies that fund Dr. Evil's evil plans, foremost of them Virtucon. He also frequently reminds the doctor to stay focused on his plan when Dr. Evil is distracted, usually by his clone, Mini-Me, or his son, Scott. He has worked for Dr. Evil for at least 30 years. He also takes care to inform Dr. Evil of flaws in his plans, such as the fact that a one million dollar ransom, in 1997, is not a tremendous amount of money compared to 30 years previous. In the first film, Number 2 informs Dr. Evil that his plans (implicating Prince Charles in an extramarital affair, destroying the ozone layer) have already been done. When Dr. Evil says he wants "frickin' sharks with frickin' laser beams attached to their frickin' heads", Number 2 carefully explains that after Dr. Evil was placed in suspended animation, sharks became an endangered species, and Virtucon was unable to acquire them. He instead attempts to placate Evil with mutated, ill-tempered sea bass, much to Evil's chagrin.

Number 2 and Dr. Evil have known each other for many years; they attended school together long before they became master criminals. While fundamentally loyal to Dr. Evil, he has always resented his boss; when they were classmates, he was always "second best" to the Doctor, who was the school's star pupil. 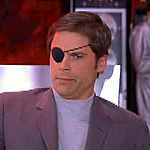 In 1969, he is seen to work for Dr. Evil, and is considerably more loyal and respectful than he is in 1999. Nevertheless, his own ambition (and far superior talent as a leader) have occasionally shown through, angering Dr. Evil. When Dr. Evil is busy arguing with Scott, Number 2 asks him if "they can set aside the family squabbles, and get down to serious business", which Dr. Evil takes as an insolent remark. When the supervillain mocks him and asks him if "he wants to wear the daddy pants", young Number 2 quickly apologizes and denies that he wants to lead the company himself.

Number 2 in the present has very little respect for Dr. Evil, sometimes rolling his eye or muttering insults behind his back. He is also contemptuous of Dr. Evil's plan to take over or destroy the world; he has been overseeing Dr. Evil's empire for 30 years, and turned it into a profitable business, an enterprise that would be ruined if Dr. Evil poured all of its resources into his half-baked bids for world domination. In the first movie's final scenes, Number 2 betrays his boss, offering to build a partnership with Powers. In a deleted scene from Austin Powers: International Man of Mystery, he even offers Austin $1 billion (US) contained in a Fendi briefcase. When Austin counts the money, he says, "You're 897 dollars short, baby." Number 2 responds by saying, "I had to buy the case." When Dr. Evil tries to cow him back into service, he lashes out, "I spent the last 30 years of my life turning this two-bit evil empire into a world class multi-national. I was going to have a cover story with Forbes. But you, like an idiot, want to take over the world. And you don't even realize that there is no world anymore! It's only corporations!" In response, Dr. Evil burns him alive, although he survives with relatively little scarring.

Number 2 is a savvy businessman, having invested in Starbucks (presumably as the main shareholder and thus, owner of the company), and in Austin Powers in Goldmember, lowering the agent fee of Hollywood Talent Agency (another front company for Dr. Evil) to 9% rather than 10%, allowing them to sign big stars like George Clooney, Julia Roberts, and Leonardo DiCaprio. He often tries to convince Dr. Evil to devote his time to lucrative legitimate enterprises rather than world domination, but is ignored. At one point, he claims that shifting resources towards Starbucks rather than plans for world conquest will increase Starbucks' profits fivefold. Dr. Evil promptly tells him to shut up and "show some respect". In a deleted scene from the third film (Austin Powers in Goldmember), while Scott is running the Evil Empire in lieu of his incarcerated father, Number 2 presents him with a business opportunity in alpaca farming.