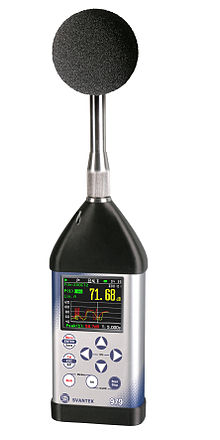 Sound level meters measure sound pressure level and are commonly used in noise pollution studies for the quantification of almost any noise, but especially for industrial, environmental and aircraft noise. However, the reading given by a sound level meter does not correlate well to human-perceived loudness; for this a loudness meter is needed. The current International standard for sound level meter performance is IEC 61672:2003 and this mandates the inclusion of an A-frequency-weighting filter and also describes other frequency weightings of C and Z (zero) frequency weightings. The older B and D frequency-weightings are now obsolete and are no longer described in the standard.

The output of the RMS circuit is linear in voltage and is passed through a logarithmic circuit to give a readout linear in decibels (dB). This is 20 times the base 10 logarithm of the ratio of a given root-mean-square sound pressure to the reference sound pressure. Root-mean-square sound pressure being obtained with a standard frequency weighting and standard time weighting. The reference pressure is set by International agreement to be 20 micropascals for airborne sound. It follows that the decibel is in a sense not a unit, it is simply a dimensionless ratio—in this case the ratio of two pressures.

Note: in acoustics all 'levels' are in decibels.

Sound exposure level—in decibels—is not much used in industrial noise measurement. Instead, the time-averaged value is used. This is the time average sound level or as it is usually called the 'equivalent continuous sound level' has the formal symbol LAT as described in paragraph 3,9 "Definitions" of IEC 61672-1 where many correct formal symbols and their common abbreviations are given. These mainly, follow the formal ISO acoustic definitions. However, for mainly historical reasons, LAT is commonly referred to as Leq.

Formally, LAT is 20 times the base 10 logarithm of the ratio of a root-mean-square A-weighted sound pressure during a stated time interval to the reference sound pressure and there is no time constant involved. To measure LAT an integrating-averaging meter is needed; this in concept takes the sound exposure, divides it by time and then takes the logarithm of the result.

An important variant of overall LAT is "short Leq" where very short Leq values are taken in succession, say at 1/8 second intervals, each being stored in a digital memory. These data elements can either be transmitted to another unit or be recovered from the memory and re-constituted into almost any conventional metric long after the data has been acquired. This can be done using either dedicated programs or standard spreadsheets. Short Leq has the advantage that as regulations change, old data can be re-processed to check if a new regulation is met. It also permits data to be converted from one metric to another in some cases. Today almost all fixed airport noise monitoring systems, which are in concept just complex sound level meters, use short Leq as their metric, as a steady stream of the digital one second Leq values can be transmitted via telephone lines or the Internet to a central display and processing unit. Short Leq is a feature of most commercial integrating sound level meters—although some manufacturers give it many different names.

Short Leq is a very valuable method for acoustic data storage; initially, a concept of the French Government's Laboratoire National d'Essais (ref 1), it has now become the most common method of storing and displaying a true time history of the noise in professional commercial sound level meters. The alternative method which is to generate a time history by storing and displaying samples of exponential sound level has too many artifacts of the sound level meter to be as valuable and such sampled data cannot be readily combined to form an overall set of data.

Until 2003 there were separate standards for exponential and linear integrating sound level meters, (IEC 60651 and IEC 60804—both now withdrawn), but since then the combined standard IEC 61672 has described both types of meter. For short Leq to be valuable the manufacturer must ensure that each separate Leq element fully complies with IEC 61672.

A common variant of the sound level meter is a noise dosemeter (dosimeter in American English). However, this is now formally known as a personal sound exposure meter (PSEM) and has its own International standard IEC 61252:1993. This is normally intended to be a body-worn instrument and thus has a relaxed technical requirement, as a body-worn instrument—because of the presence of the body—has a poorer overall acoustic performance. A PSEM gives a read-out based on sound exposure, usually Pa²·h, and the older 'classic' dosimeters giving the metric of 'percentage dose' are no longer used in most countries. The problem with "%dose" is that it relates to the political situation and thus any device can become obsolete if the "100%" value is changed by local laws. Today, one of the most common devices in use is a miniature PSEM called by many manufacturers a 'dosebadge', or some similar name, as it is so small and light that it somewhat resembles a radiation badge. These tiny devices have the three advantages that not only do they not affect the sound field, but they are so small that they do not interfere with the worker in any way and his work pattern does not change; as well, having no microphone cable, they should have a lower risk of failure, by the cable 'catching on machinery'.

Most national regulations also call for the absolute peak value to be measured to protect workers hearing against sudden large pressure peaks, using either 'C' or 'Z' frequency weighting. 'Peak sound pressure level' should not be confused with 'MAX sound pressure level'. 'Max sound pressure level' is simply the highest RMS reading a conventional sound level meter gives over a stated period for a given time-weighting (S, F, or I) and can be many decibel less than the peak value. In the European Union the maximum permitted value of the peak sound level is 140 dB(C) and this equates to 200 Pa pressure. The symbol for the A-frequency and S-time weighted maximum sound level is LASmax. For the C-frequency weighted peak it is LCpk.

Sound level meters are divided into two classes—what were called 'types' in previous standards. The two classes have the same design centre goals but the tolerances differ. Class 1 instruments have a wider frequency range and a tighter tolerance than a similar, lower cost, Class 2 unit. This applies to both the sound level meter itself as well as the associated calibrator. Most national standards permit the use of "at least a Class 2 instrument" and for many measurements, there is little practical point in using a Class 1 unit; these are best employed for research and law enforcement. New in the standard IEC 61672 is a minimum 60 dB linear span requirement and Z-frequency-weighting, with a general tightening of limit tolerances, as well as the inclusion of measurement uncertainty in the testing regime. This makes is unlikely that a sound level meter designed to the older 60651 and 60804 standards will meet the requirements of IEC 61672 : 2003.

Sound level meters are also divided into two types in "the Atlantic divide". Sound level meters meeting the USA American National Standards Institute (ANSI) specifications cannot usually meet the corresponding International Electrotechnical Commission (IEC) specifications at the same time, as the ANSI standard describes instruments that are calibrated to a randomly incident wave, i.e. a diffuse sound field, while internationally meters are calibrated to a free field wave, that is sound coming from a single direction. Further, USA dosimeters have an exchange rate of level against time where every 5 dB increase in level halves the permitted exposure time; whereas in the rest of the world a 3 dB increase in level halves the permitted exposure time. The 3 dB doubling method is called the "equal energy" rule and there is no possible way of converting data taken under one rule to be used under the other. Despite these differences, many developing countries try to specify both USA and international specifications in one instrument in their national regulations.[citation needed] Because of this, many commercial PSEM have dual channels with 3 and 5 dB doubling, with some even having 4 dB for the U.S. Air Force.

One of the more difficult decisions in selecting a sound level meter is "How do you know if it complies with its claimed standard? This is a difficult question and IEC 61672 part 2 tries to answer this by the concept of "pattern approval". A manufacturer has to supply instruments to a national laboratory which tests one of them and if it meets its claims issue a formal Pattern Approval certificate. In Europe the most common—and the most rigorous—approval is often considered to be that from the PTB in Germany (Physikalisch-Technische Bundesanstalt). If a manufacturer cannot show at least one model in his range that has such approval, it is reasonable to be wary, but the cost of this approval militate against any manufacturer having all his range approved. There are many very low cost devices masquerading as sound level meters, many under $200, but so far none of these have been proven to meet their sales claims—by Pattern Approval—and their use may risk hearing damage because of possible measurement errors.

Even the most accurate approved sound level meter must be regularly checked for sensitivity—what most people loosely call 'calibration'. To assist in this sensitivity checking, PTB also Pattern Approves sound calibrators to IEC 60942:2003 and in April 2008, the first commercial units were formally approved both at Class 1 and Class 2 level with the approval number PTB-1.61.4028829.

These units consist of a computer controlled generator with additional sensors to correct for humidity, temperature, battery voltage and static pressure. The output of the generator is fed to transducer in a half-inch cavity into which the sound level meter microphone is inserted. The acoustic level generated is 94 dB which is 1 pascal and is at a frequency of 1 kHz where all the frequency weightings have the same sensitivity.

The following International standards define sound level meters, PSEM and associated devices. Most countries national standards—except of course those of the USA—follow these very closely. In many cases the equivalent European standard, agreed by the EU, is designated for example EN 61672 and the UK national standard then becomes BS. EN 61672.

These International Standards were prepared by IEC technical committee 29:Electroacoustics, in cooperation with the International Organization of Legal Metrology (OIML).

Until 2003 there were separate standards for exponential and linear integrating sound level meters, but since then IEC 61672 has described both types. The classic exponential meter was originally described in IEC 123 for 'industrial' meters followed by IEC 179 for 'precision' meters. Both of these were replaced by IEC 651, later re-named IEC 60651, while the linear integrating meters were initially described by IEC 804, later renamed IEC60804. Both IEC 60651 and 60804 included four accuracy classes, called "types". In IEC 61672 these were reduced to just two accuracy classes 1 and 2. These 'withdrawn' standards should no longer be used, especially for any official purchasing requirements, as they have significantly poorer accuracy requirements than IEC 61672.

Some major international manufacturers of Approved sound level meters, all of whom—with others—have provided engineers for many years to the working group of the IEC and all of whom were involved in the production of the standard IEC 61672.

The companies are listed in alpha-numerical order with their approximate age since their foundation in brackets, e.g. {40}, rounded to five years.

There are also some newer companies who have obtained Pattern Approval but were not involved in the production of the relevant standards.