Anita Mui Yim-fong (10 October 1963 – 30 December 2003) was a popular Hong Kong singer and actress. During her prime years she made major contributions to the cantopop music scene, while receiving numerous awards and honours. She remained an idol throughout most of her career, and was generally regarded as a cantopop diva.[3] Mui once held a sell-out concert at Hammersmith, London, England, where she was dubbed the "Madonna of Asia".[2] That title has stayed with her throughout her career, and has been used as a comparison for both Eastern and Western media.[5][6][7]

In the 1980s the gangtai style of music was revolutionised by her wild dancing and femininity on stage.[8] She was famous for having outrageous costumes and also high powered performances. That is combined with her contralto vocals, which is low for a female artist.[9] Her fanbase reached far beyond Hong Kong, and into many parts of Asia including Taiwan, Mainland China, Singapore, Malaysia as well as the overseas market. In the Hong Kong entertainment industry where stars often come and go, Mui was able to remain a major star in the spotlight for 20 years. Her career only came to a stop in 2003 when she was suddenly diagnosed with cervical cancer, dying at the early age of 40.[3][6] Even so, her music and film legacy continues to live on. Her success reached well beyond that of the entertainment circle with humanitarian work, donations and charities that played a major role in helping society even well into the present day.

Anita Mui experienced much hardship and difficulty in her childhood. She was the youngest daughter in a family of five children.[6] Her older sister, Ann Mui, was also a singer. Their father died when Anita was only five years old, thus the children were raised in a single parent family. At an early age she had to help provide for her siblings, dropping out of school to do so. More hardship followed the family when the bar her mother ran was destroyed by fire.[2] To make a living, Anita herself first entered show business at the age of five.[5][10] She performed Chinese operas and pop songs in theatres and the streets.[5][10] Both Anita and her older sister Ann Mui basically performed in any night club that offered them a chance to make a living.[2]

In 1982 the first New Talent Singing Awards was held. Mui got a big break by winning the contest with the song "The Windy Season" (風的季節), beating over 3,000 contestants.[10][11] Despite her title as "new talent" at that time, she had already been a singer for more than 10 years from street and club performances during her childhood.[12]

As an award to winning the New Talent contest at the time, Mui's first album was released with the local record company Capital Artists.[12] Her debut drew a lukewarm response from the audience. But subsequent albums fared much better, as she developed her personal style and image. In 1983 and 1984, she won the RTHK Top 10 Gold Songs award back to back.[13][14] Her winning streak continued as she won another major award in 1985, her first top 10 Jade Solid Gold Best Female Singer award.[15] For the next four years, she won the award consecutively every year until 1989.[16][17][18][19]

In terms of live performances, her first concert was held in 1985 lasting 15 nights. Beginning in late 1987, a series of 28 consecutive concerts at the Hong Kong Coliseum were held through early 1988. This established a record at the time and dubbed Mui the title of "Ever Changing Anita Mui" (百變梅艷芳), which had become her trademark.[21] Her popularity was also gaining prominence outside of Hong Kong. As she was invited to sing at the 1988 Summer Olympics opening ceremony in Seoul, Korea on the same stage with Janet Jackson.[22] She performed in 300 concerts in her career.[5][10]

In 1990, Mui announced that she would put an end to receiving music awards to give a chance to newcomers. She held farewell concerts for 33 consecutive nights before retiring from the stage. At the age of 28 she stepped down from the industry, only to return from retirement in 1994.[23] Anita mentored several Hong Kong newcomer singers who have since become successful, most notably Andy Hui, Denise Ho, Edmond Leung and the band Grasshopper.[12] As a lifetime achievement award in music, Mui was awarded the RTHK Golden Needle Award in 1998.[24] 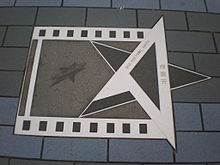 Mui's star on the Avenue of Stars

Mui was also well-known as an actress across the Asian region. As she starred in more than 40 movies over a 20 year period.[25] Her films were mainly of the action-thriller and kung fu variety, but she had also taken comedic and dramatic roles. Her first acting award as a supporting actress was won at the Hong Kong Film Awards for the movie Fate in 1984. Three years later in 1987, the film Rouge won her Best Actress at Golden Horse Award.[6] She won the award again in 1989 at the Hong Kong Film Awards.

In 1993, she starred in The Heroic Trio with Michelle Yeoh and Maggie Cheung, and it proved to be one of her most popular action films. In 1995, she found some international recognition by starring opposite Jackie Chan in Rumble in the Bronx.[2]

Later on in 1997, she also won another best supporting actress at Hong Kong Film Award with the movie Eighteen Springs. In 2002, she won Best actress at Changchun Film Festival Golden Deer Awards for Best Actress with her performance in July Rhapsody.[26] Her ability to successfully play a wide range of roles from comedy to tragedy, allowed her to take part in many lead roles.

Anita was originally cast for Zhang Yimou's 2004 movie House of Flying Daggers. She resigned from her role in the movie only two weeks before her death. Zhang had held her parts of filming to the last due to her poor health.[27] Out of respect for Mui, Zhang did not cast another actress in the role and the character was removed from the screenplay. She received a dedication during the closing credits.[27]

Throughout her career, the tabloid magazines were unforgiving. Rumours never ceased to plague Mui, who was accused of being addicted to drugs, plastic surgery, being suicidal, being linked to the death of a triad leader.[12] Rumours of affairs with leading actors also circulated.[2]

Mui was actively involved in charitable projects throughout her career. The Tibetan red-crown Shamar Rinpoche once said "She had a true heart. She was an unconventional woman and brought happiness to lots of people during her life."[5][10] Her establishment of a nursing home in San Francisco, prompted the mayor of the city in 1992 to name 18 April as "Anita Mui Day".[2] In 1993, she established the "Anita Mui True Heart Charity Foundation" (梅艷芳四海一心基金會). That same year, she was also one of the founders of the Hong Kong Performing Artistes Guild.[12][28] 23 October 1993 was also announced to be "Anita Mui Day" in Toronto, Canada.[29] 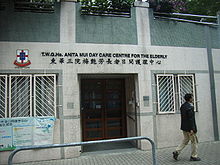 One of the care centres established by Mui

During the Severe Acute Respiratory Syndrome (SARS) outbreak, she initiated a fund raising concert titled the 1:99 Concert to raise money for SARS-affected families.[6] She was also awarded the "Fighting Against SARS Award" from RTHK and Ming pao newspaper.[28]

In 2003, she wrote and published the book The Heart of the Modern Woman (現代女人心). Profits from the book went to the "Children's Cancer Foundation".[7]

On 23 September 2004, the "Anita Mui True Heart Digital Multimedia Studio" was opened at The University of Hong Kong. It included state of the art equipment for digital audio and video editing.[30] In Causeway Bay, an Anita-mui themed cafe called "Happiness Moon" (囍月) is also dedicated to her legacy.[31]

On 5 September 2003, Mui made the public announcement that she had cervical cancer.[3][10] It was widely believed that she had chosen medical rather than surgical therapy because she wanted to preserve the possibility to conceive. Knowing that she would not make it past the illness, she had a final series of shows entitled the "Anita Classic Moment Live Concert". The series consisted of eight shows held at the Hong Kong Coliseum in 2003. It was her last concert series before her death.[12] Musical guests included Jacky Cheung, Sandy Lam, David Tao, Eason Chan, Andy Hui, Alan Tam, Hacken Lee and Kelly Chen.[32] Her final symbolic act was to "marry the stage", which was accompanied by her hit "Sunset Melody" (夕陽之歌) as she exited the stage for the final time. Her very last song performed on stage was "Cherish When We Meet Again" (珍惜再會時), a rendition of The Manhattans' "Let's Just Kiss And Say Goodbye". Mui eventually lost her battle to cervical cancer and died of respiratory complications leading to a lung failure at Hong Kong Sanatorium and Hospital on 30 December 2003 at 02:50 (HK local time).[3][6][7] She was 40 years old.[10] Thousands of fans turned out for her funeral in North Point in January 2004.[5][10]

In 1998 an ATV TV series Forever Love Song told a story of a character that was loosely based on the story of Anita Mui, but the character names were purposely changed. In 2007 a TV series was produced in China titled "Anita Mui Fei" (梅艷芳菲) to tell the many dramas in her life. The 42 episode series was broadcast by China Education Television. Fellow actors Andy Lau and Leslie Cheung were also portrayed in the series, though some of the sensitive subjects such as her suffering of cancer, Leslie's suicide and her mother's real estate dilemma were avoided.[33] Actress Alice Chan (陳煒) plays the role of Mui in the series.[34]

On 11 October 2008, a show on TVB was dedicated to her titled "Our Anita Mui" (我們的梅艷芳). Many off-stage fans and personnel who worked with her got a chance to talk about their personal experiences with Mui. Singers who participated in the show included Andy Hui, Edmond Leung and Stephanie Cheng.[35][36]

Her ashes are interred at the Po Lin Monastery's mausoleum on Lantau Island.

In her will, she bequeathed two properties to her fashion designer, and the remainder to the Karen Trust – a trust she had set up and looked after by HSBC International Trustees. Its beneficiaries included her mother, Tam Mei-kam, and four nieces and nephews. The Karen Trust provided Tam with a life tenancy of HK$70,000 per month; upon Tam's death, the estate would go to the New Horizon Buddhist Association absolutely.[37]

In 2005, Tam received a HK$705,000 lump-sum payment from the trust in May. She applied for and obtained a hardship grant to pay for medical expenditure of $50,000 in December; her application for funds from the estate to challenge the will was denied.[38] In 2008, Anita Mui's estate was estimated to be worth HK$100 million. Tam Mei-kam contested the will, arguing that Anita was mentally unfit when she executed her will in 2003, weeks before her death. The High Court ruled that Mui was of sound mind when she signed the will, and that Mui simply did not trust her mother with money.[3] Through the years, Tam mounted several legal challenges to the will, and succeeded in having the life tenancy varied to $120,000.[39] Tam was reportedly still owing $2 million in legal costs.[37] A fresh appeal by Tam and elder brother Peter Mui failed at the Court of Final Appeal in May 2011.[39]

Mui moved to Canada in the 1990s where she lived for two years and was granted landed immigrant status. However, her constant absence from Canada resulted in her status being revoked. She never gained Canadian citizenship.

In 1995 Mui performed the song "Bad Girl" (壞女孩) in Guangzhou, China where the song was banned at the time.[8][40] It was considered during that time pornographic in nature.[8] Government authorities were infuriated when she chose to sing the song on the last day of her concert.[40]