Malton is a neighbourhood in the northeastern part of the city of Mississauga, Ontario, Canada, located to the northwest of Toronto. The neighbourhood has a population of approximately 36,400 as of 2002.

Malton is bounded by Highway 427 and Finch Avenue (border with Toronto) to the east, the Brampton city border along Steeles Avenue to the north, Airport Road to the west, and the CN rail line and Toronto Pearson International Airport to the south. Malton is unique in that it does not adjoin any other Mississauga neighbourhood.

Together, the Malton and Britannia Woods areas of Mississauga form Ward 5. Ward 5 is one of the largest in the City of Mississauga and the only ward with both a large number of businesses and residents. Ward 5 is represented by Councillor Bonnie Crombie. Malton is also home to the world renowned Partners in Project Green and Canada's busiest airport.

The oldest portion of Malton (the former Police Village of Malton) is located on the northwestern corner of Airport and Derry Roads. All of the roads in this area are named after cities in the UK.

The northeast corner of Toronto Township was first settled in 1823 by Samuel Moore. During the 1840s Richard Halliday, the local blacksmith and innkeeper, arrived and named the settlement Malton, after his home in England. While most people are acquainted with Malton as the home of Pearson International Airport, few are aware of Malton's agricultural past and its historic role as a distribution hub for grain shipments during the 19th Century.

The introduction of the Grand Trunk Railway in 1854, allowed better access to Toronto markets for local farmers. The village of Malton was subdivided in 1855 and became the county seat in 1859, if only for a year. Its economic prosperity in the late 1860s was short lived.

In 1937, Malton experienced a major shift from agricultural to an industrial economy when 13 farms were selected to become the location of an airport, now known as the Pearson International Airport. The airport provided wartime prosperity during the 1940s and continued to be an integral part of the economy in the post-war years.

Malton Airport, has hosted British Commonwealth Air Training Plan facilities, as well as aircraft manufacturing operations (originally National Steel Car, and later Victory Aircraft). While the Malton of today bears little resemblance to the Malton of the 1940s, homage to this heritage is paid in subtle ways. There are streets to the north of the village with names referencing the war, including Victory, McNaughton (Andrew McNaughton, commander of the Canadian Forces in the UK), Churchill and Lancaster (Avro Lancasters were built at Victory Aircraft from 1943 to 1945).

In 1958, Malton acquired an international reputation as a leader in aeronautical design and manufacturing. Malton became home of the famous "Avro Arrow", Canada's first supersonic aircraft, still believed to have been years ahead of its time. On February 20, 1959, Prime Minister John Diefenbaker terminated the project and the five completed Arrows were dismantled. After the cancellation of the Avro Arrow program in 1959, the plant was operated by de Havilland Canada, McDonnell Douglas Canada, and Boeing Canada before being demolished in 2005.

The Avro plant in Malton was also home to the first flight of a jet arliner in North America. This jetliner was built and tested in Malton but never went into full production due to the limited capacity of the plant that was already building aircraft for Canada's airforce.

Malton was also home to the second of two North American manufacturing plants for Tonka Toys. The building, still standing today but not making toys, sits next to the Airport Road overpass and made toys for generations of children.

The predominantly British town saw an influx of Italian and Polish immigrants from the immediate post-war period through the 1960s, and its proximity to Pearson International Airport (known as Malton Airport from 1939–1960) made it a magnet for immigrants from India (including a large Sikh community) and continues to attract them to this day.

Originally on the border (Airport Road) between Toronto Gore and Toronto Townships, Malton was ceded to Toronto Township in 1952, and then incorporated into the town (1967), and then the City of Mississauga in 1974. It is now a working-class neighbourhood that includes many people of many nations.

In addition to the airport, Malton has great importance as a transportation link between Toronto and its suburbs to the west, particularly Brampton and the other parts of Mississauga. Among other things, the tiny neighbourhood borders the airport, Brampton, Vaughan and Etobicoke. As such, it is very strategically placed and important to the flow of people and goods throughout the Greater Toronto Area. 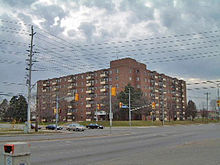 One of the busiest intersections in Malton. Facing northwest, the apartment building at 3425 Morningstar Drive can be seen.

The Avro Arrow, the first Canadian made supersonic military jet, was first created in Malton. Malton was also the home of the world's second (and North America's first) jet transport aircraft, the Avro Jetliner.

Malton has a large Catholic community which is served by several schools. Ascension of Our Lord Secondary School was originally built as a Junior High, but is now Malton's only Catholic High School. Formerly there were also several Primary schools, of which two are left.

Holy Cross Separate School is located next to Our Lady of The Airways Catholic Church. When St. Gabriel was closed in 2004, the remaining students were incorporated into Holy Cross and the school was reopened as an Adult Learning Centre.

Most students in Malton attend a Peel District School, of which there are several:

Lincoln M. Alexander Secondary School is located across the road from Malton's branch of the Mississauga Library system and just down the street from Westwood Mall and the adjacent bus terminal. This is very convenient for students.

Lancaster Junior Public School was originally a Senior Public School (Junior High) but now has been virtually rebuilt as a school for children in Kindergarten to Grade 5. The newly refurbished school also contains an "Early Years Hub". The "Hub" is part of a Peel District School Board program designed for pre-Kindergarten aged children and their families.

Malton's growing Sikh population is served by the Khalsa Community School, on Airport Road just next to the Malton Gurdwara. Currently the school only offers classes up to Grade 8, but there are plans to move the school to a larger building in Brampton. The school will then be able to offer education up until Grade 12. The school is not a private school specifically directed to only Sikhs but to all students of any caste, creed, religion, or race.

In addition to being in the coverage areas of The Mississauga News and SNAP North Mississauga, the neighbourhood is represented by The Malton Mirror.

As of 2010, a new bus terminal was built on the corner of Morningstar Dr. and Goreway Dr. An overbridge at railway crossing on Goreway Drive has been started and will soon begin construction. There is a Punjabi/Indian shopping plaza in its final stages of construction at drew road and airport road. There are two new pools under construction at the community centre, two new ambulance stations on either side of Malton and one new fire hall. Victory Hall, home to WW2 soldiers heading off to war, was completely renovated to launch it on its next 60 years! Five of the parks have been renovated with new features for residents of all ages. 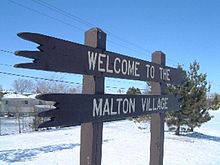 Old sign that welcomed people upon their entry to Malton. This sign was replaced with several new community signs featuring the Avro Arrow. Now there are signs at all of the entries to Malton.