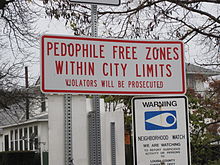 Sign at the limits of Wapello, Iowa; sex offender-free districts appeared as a result of Megan's Law.

Megan's Law is an informal name for laws in the United States requiring law enforcement authorities to make information available to the public regarding registered sex offenders. Individual states decide what information will be made available and how it should be disseminated. Commonly included information includes the offender's name, picture, address, incarceration date, and nature of crime. The information is often displayed on free public websites, but can be published in newspapers, distributed in pamphlets, or through various other means.

At the federal level, Megan's Law is known as the Sexual Offender (Jacob Wetterling) Act of 1994, and requires persons convicted of sex crimes against children to notify local law enforcement of any change of address or employment after release from custody (prison or psychiatric facility). The notification requirement may be imposed for a fixed period of time - usually at least ten years - or permanently.

Some states may legislate registration for all sex crimes, even if no minors were involved. It is a felony in most jurisdictions to fail to register or fail to update information.

Paul Kramer was the sponsor in 1994 in the New Jersey General Assembly of a package of seven bills known as Megan's Law that were approved one month after the rape and murder of seven-year-old Megan Kanka by Jesse Timmendequas, a sex offender who had been previously convicted of sex crimes and had lived across the street from Kanka together with four other sex offenders. The bills would require sex offender registration, with a database tracked by the state, community notification of registered sex offenders moving into a neighborhood and life in prison without a chance of parole for those convicted of a second sexual assault. Kramer expressed incredulity at the controversy created by the bills, saying that "Megan Kanka would be alive today" if the bills he proposed had been law.[1]

Michigan adopted Megan's law soon after its inception in New Jersey and modified it with some notable changes. Each "sex"-related offense is placed on the registry with largely vague categories of severity numbered 1 through 4. The specific details of the offense, the circumstances, and various other factors are taken into consideration when charges are brought and listed on the site along with the driver's license picture of the individual. Regardless of offense level, the individual is placed on the registry for a minimum of 25 years, up to life. Certain HYTA cases are not listed on the public version of the registry while the individuals are minors.

Michigan's law also includes registration as sex offenders for certain crimes without any sexual element, such as kidnapping and public vulgarity or indecency (swearing in public).

The effectiveness of Megan's Law, the Jacob Wetterling Act and the Adam Walsh Act are constant fodder for media and politicians alike. Proponents of the above laws maintain that these laws are necessary for the control and monitoring of dangerous individuals that live amongst the general populace. One senator has suggested that sex offenders in each jurisdiction be ordered to report to their local jail on October 31 (Halloween) of each year to protect children from being abducted during "this night of intentional identity confusion"[citation needed]. The logistics of this have proven to be difficult to justify, as there have been no reported cases of abduction related to children visiting an offender's home on Halloween.

Michigan state representative Paul Scott issued this statement on October 14, 2011: "Although Halloween is a joyous time for many young children, it is also a time when sex offenders don't have to troll play areas or neighborhood hangouts to gain access to young people," said Scott, R-Grand Blanc. "Unsuspecting children will inevitably knock on the doors of sex offenders this Saturday, creating a potentially dangerous situation."

His comments reflect the general attitude of many politicians, legislators and law-enforcement officials across the country. Virtually all 50 states have enacted similar requirements for sex offenders on Halloween night.

"Convicted sex offenders should never be allowed to take part in the Halloween tradition," Scott said. "Michigan must take a 'lights out' approach when it comes to the homes of sex offenders to help young people stay safe during Halloween."

Considering extensive research done on true sex offense recidivism rates - which average under 9% for the entire country from 1983 to 2010 - suggest that Scott's comments are less fact and more of a personal agenda, the true scope of Megan's Law is revealed to be quite broad and open to interpretation.

Reformists have conceded that the registry and the above laws have a place, however with some modifications. The typical recidivism rate statistics provided by the State of Michigan show that an average of 3.5% (years 2005, 2006, 2007, 2008) of registered offenders re-offend (a reoffense is defined as committing a similar offense, missing a parole or probation meeting, or failing to re-register as is required 4 times a year). The other 96.5% on average, for the years stated, are classified as first time offenders with no prior felonies or "sex"-related crimes on record.

As stated above, country-wide statistics over a longer period of time echo the results provided by the State of Michigan.[3] [4]