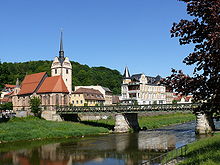 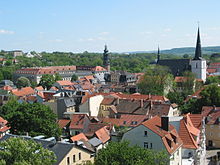 The Free State of Thuringia (German: Freistaat Thüringen, pronounced [ˈfʁaɪʃtaːt ˈtyːʁɪŋən], English /θjʊərˈrɪndʒiə/) is a state of Germany, located in the central part of the country. It has an area of 16,171 square kilometres (6,244 sq mi) and 2.29 million inhabitants, making it the sixth smallest by area and the fifth smallest by population of Germany's sixteen states. Most of Thuringia is within the watershed of the Saale, a left tributary of the Elbe. Its capital is Erfurt.

Thuringia has been known by the nickname of "the green heart of Germany" (das grüne Herz Deutschlands) from the late 19th century,[2] due to the dense forest that covers the terrain.

Thuringia is well known in Germany for nature and winter sports. It is home to the Rennsteig, Germany's most famous hiking trail, and the winter resort of Oberhof. Germany won more Winter Olympics gold medals than any other country in the last 20 years, and half of Germany's gold medals have been won by Thuringian athletes.[3]

From the northwest going clockwise, Thuringia borders on the German states of Lower Saxony, Saxony-Anhalt, Saxony, Bavaria and Hesse. The ridges of the western Harz Mountains divide the region from Lower Saxony on the north-west, while the eastern Harz similarly separates Thuringia from the state of Saxony-Anhalt to the north-east. To the south and southwest, the Thuringian Forest effectively separates the ancient region of Franconia, now the northern part of Bavaria, from the rolling plains of most of Thuringia. The central Harz range extends southwards along the western side into the northwest corner of the Thuringian Forest region, making Thuringia a lowland basin of rolling plains nearly surrounded by ancient somewhat-difficult mountains. To the west across the mountains and south is the drainage basin of the Rhine River.

The most conspicuous geographical feature of Thuringia is the Thuringian Forest, a mountain chain in the southwest. The Werra River, a tributary of the Weser River, separates this mountain chain from the volcanic Rhön Mountains, which are partially in Thuringia, Bavaria, and Hesse. In the northwest, Thuringia includes a small part of the Harz. The eastern part of Thuringia is generally a plain. The Saale River runs through these lowlands from south to north.

The geographic center of the Federal Republic is located in Thuringia, near the municipality of Niederdorla.

Thuringia is divided into 17 districts (Landkreise): 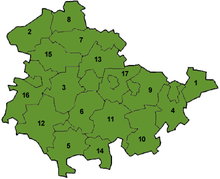 Map of Thüringen showing the boundaries of the districts

Furthermore there are six urban districts (not numerated in the map):

Each of the urban districts contains a town of the same name (see table below, "Towns in Thuringia").

For the earlier history of the region, see Thuringii and Duchy of Thuringia.

Named after the Thuringii tribe who occupied it ca. AD 300, Thuringia came under Frankish domination in the 6th century, forming a part of the subsequent Holy Roman Empire. 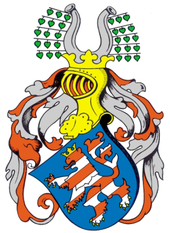 Arms of the landgraves of Thuringia (1265)

Thuringia became a landgraviate in 1130. After the extinction of the reigning Ludowingian line of counts in 1247 and the War of the Thuringian Succession (1247–1264), the western half became independent under the name of Hesse, never to become a part of Thuringia again. Most of the remaining Thuringia came under the rule of the Wettin dynasty of the nearby Margraviate of Meissen, the nucleus of the later Electorate and Kingdom of Saxony. With the division of the house of Wettin in 1485, Thuringia went to the senior Ernestine branch of the family, which subsequently subdivided the area into a number of smaller states, according to the Saxon tradition of dividing inheritance amongst male heirs. These were the "Saxon duchies", consisting, among others, of the states of Saxe-Weimar, Saxe-Eisenach, Saxe-Jena, Saxe-Meiningen, Saxe-Altenburg, Saxe-Coburg, and Saxe-Gotha; Thuringia became merely a geographical concept.

Thuringia generally accepted the Protestant Reformation. The Catholic faith was abolished as early as 1520; priests that remained loyal were driven away and churches and monasteries were largely destroyed, especially during the German Peasants' War of 1525. In Mühlhausen and elsewhere, the Anabaptists found many adherents. Thomas Müntzer, a leader of some non-peaceful groups of this sect, was active in this city. Within the borders of Thuringia the Catholic faith was maintained only in the district called Eichsfeld, which was ruled by the Archbishop of Mainz, and to a small degree in the city and vicinity of Erfurt. 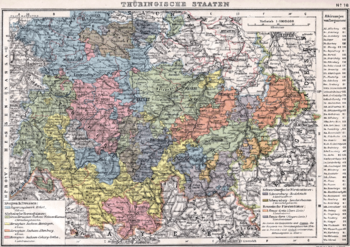 This German map shows the various states of Thuringia within the German Empire in 1905. 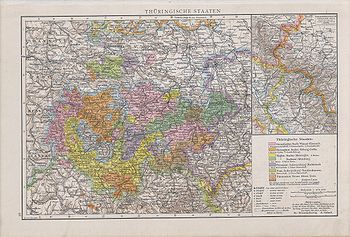 Some reordering of the Thuringian states occurred during the German Mediatisation from 1795–1814, and the territory was included within the Napoleonic Confederation of the Rhine organized in 1806. The 1815 Congress of Vienna confirmed these changes and the Thuringian states' inclusion in the German Confederation; the Kingdom of Prussia also acquired some Thuringian territory and administered it within the Province of Saxony. The Thuringian duchies which became part of the German Empire in 1871 during the Prussian-led unification of Germany were Saxe-Weimar-Eisenach, Saxe-Meiningen, Saxe-Altenburg, Saxe-Coburg-Gotha, Schwarzburg-Sondershausen, Schwarzburg-Rudolstadt and the two principalities of Reuss Elder Line and Reuss Younger Line. In 1920, after World War I, these small states merged into one state, called Thuringia; only Saxe-Coburg voted to join Bavaria instead. Weimar became the new capital of Thuringia. The coat of arms of this new state was simpler than they had been previously. 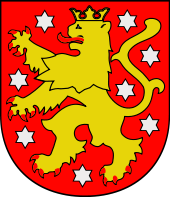 After briefly being controlled by the USA, from July 1945, the state of Thuringia came under the Soviet occupation zone, and was expanded to include parts Prussian Saxony, such as the areas around Erfurt, Mühlhausen, and Nordhausen. Erfurt became the new capital of Thuringia.

In 1952, the German Democratic Republic dissolved its states, and created districts (Bezirke) instead. The three districts that shared the territory of Thuringia were based in Erfurt, Gera and Suhl.

The State of Thuringia was restored with slightly altered borders during Germany's reunification in 1990. 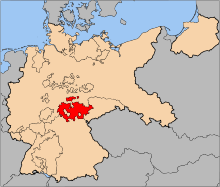 The state of Thuringia (red) upon its formation in 1920
Main article: List of Ministers-President of Thuringia

Turnout was 56.2%. SPD and CDU formed a coalition seven weeks after the election.[4]