Masshouse is a site within Birmingham, United Kingdom which is under development with the construction of 13 new highrise blocks intended for public services, commerce and residential purposes. When completed, the blocks will have a prominent position on the Eastside skyline.

The Masshouse area existed in the Victorian times as nothing else but Masshouse Lane. It was a small lane which was connected to Dale End and the junction at Albert Street and Duddeston Row. The name derives from the establishment of a Roman Catholic chapel (i.e. for the celebration of Mass) there by a Franciscan priest, Leo Randolph, in 1687, followed by a convent in March 1688. Both were burned down by a mob, instigated by the protestant Lord Delamere, in November 1688.[1][2].

Showell's Dictionary of Birmingham (1885) describes the building and destruction of the "mass house":

Masshouse Lane :- Takes its name from the Roman Catholic Church (or Mass House, as such edifices were then called) erected in 1687, and dedicated to St. Mary Magdalen and St. Francis. The foundation stone was laid March 23, in the above year, and on 16th August, 1688, the first stone of a Franciscan Convent was laid adjoining to the Church, which latter was consecrated Sept. 4. The Church was 95ft long by 33ft. wide, and towards the building of it and the Convent, James II gave 125 "tuns of timber," which were sold for £180; Sir John Gage gave timber valued at £140; the Dowager Queen Catherine gave £10 15s.; and a Mrs. Anne Gregg, £250. This would appear to have been the first place of worship put up here by the Romish Church since the time of Henry VIII., and it was not allowed to stand long, for the Church and what part of the Convent was built (in the words of the Franciscan priest who laid the first stone) "was first defaced, and most of it burrent within to near ye vallue of 400lb., by ye Lord Dellamer's order upon ye 26 of November, 1688, and ye day sevennight following ye rabble of Birmingham begon to pul ye Church and Convent down, and saesed not until they had pulled up ye fundations. They sold ye materials, of which many houses and parts of houses are built in ye town of Birmingham, ye townsmen of ye better sort not resisting ye rabble, but quietly permitting, if not prompting them to doe itt."[3].

It was developed in the 1960s into an elevated 800-metre (2,625 ft)[4] road intersection on the A4400 road and was named Masshouse Circus.[5] The area below it was cleared and used as a surface car park. The elevated roadways were made of concrete which created an appearance disliked by locals. Under the roads was a large car park with pedestrian subways. There were six subways:[6]

The ring road became known as the "concrete collar" and restricted the expansion of the city centre core beyond it into the east.[7]

In March 2002, the roundabout was demolished to clear the land for development and this demolition was named the "breaking of the concrete collar".[8] The work was carried out by Birse Civils and designed by Gifford & Partners[9] in a contract worth £24.2 million. The contractors sought to reuse the 20,000 cubic metres (26,000 cu yd) of reinforced concrete that was removed during demolition.[10] Over £9 million from the European Regional Development Fund was invested into the project.[11]

A replacement road to connect the Bullring Shopping Centre with Jennens Road was completed and opened in August 2003. However, this has been closed due to a number of injuries to pedestrians.[8] However, the land was left as a car park for a number of years as plans and designs for the development were created. Pieces of the rubble collected from the demolished structure, were put on sale by the Birmingham branch of Friends of the Earth with a price tag of 50p per piece.[12] 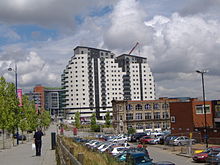 Masshouse is now cleared and ready for development with the largest of the three sites being used as a temporary car park. It has been separated into two phases with Phase 1 retaining the Masshouse name and the other plot, Phase 2, being called City Park Gate, named after the new Eastside City Park to be constructed next to it.

Phase 1 will stretch from the McLaren Building to the Park Street. The scheme is being developed by David McLean Developments and has been designed by Edward Cullinan architects. The entire scheme is expected to cost £350 million[13] and provide 1,100,000 square feet (102,000 m2) of space.[14]

The planning application for Block I was submitted in October 2004.[14] Block I has been completed and the first residents moved into the building in December 2006. Construction of the 14-storey building cost £30 million and consists of 173 studio, one and two-bedroom apartments.[15] Over 50% of the building's 173 apartments were sold in the first week of release.[16] The building is clad in 6,000 m2 (65,000 sq ft) of pre-cast panels. They consist of a complex mixture of finishes with some containing black polished bands bounded by a white concrete frame and finished to two different levels of exposure. The top floor penthouse apartments are clad with grey polished pre-cast panels. Many of the main cladding panels are either concave or convex with pointed ends and most will be pre-fitted with windows at the Techrete factory to accelerate the construction process.[17] 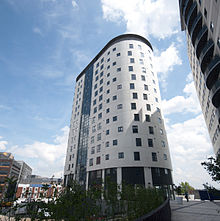 In March 2007, an outline planning application was submitted to Birmingham City Council by GVA Grimley to build a mixed-use development of up to 70,907 square metres (763,240 sq ft) (gross internal area) on Plot 7. The application consisted of four buildings for retail, office, hotel and residential use.[18]

There will also be a 20,000 sq ft (1,900 m2) Birmingham Magistrates' Court, with 24 court rooms in a purpose designed complex designed by Denton Corker Marshall. The courts will cost £80 million and will be 15 storeys tall.[19]

In January 2010, Braemar Estates (Residential) Ltd were appointed as property managers to Block I at Masshouse.

Masshouse submitted plans for a second residential building named Block M in August 2006.[20] Construction commenced in August 2007 and was due for completion in 2009[21] however, the collapse of development partner David McLean in 2008 caused the construction to be put on hold.[22][23] In 2009 McLaren were appointed to take over from David McLean and construction recommenced and completed in 2011.[23]. The development is estimated to have cost £23 million and consists of 167 studio, one and two bedroom apartments with 12 apartments per floor over 14 floors.[24] The apartments went on sale in Spring 2011 under the name Hive, studio apartments start at £90,000 and one bedroom apartments start at £110,000. Although the apartments are on sale hard landscaping at the eastern side is incomplete and due to delays to the Magistrates Court project the western side remains as derelict land. All properties are powered by Birmingham District Energy Company (BDEC), the first time residential homes in the city have benefited from the city's district water heating system the apartments receive power from the new Jennens Road Energy Centre on Aston University’s campus.[25]