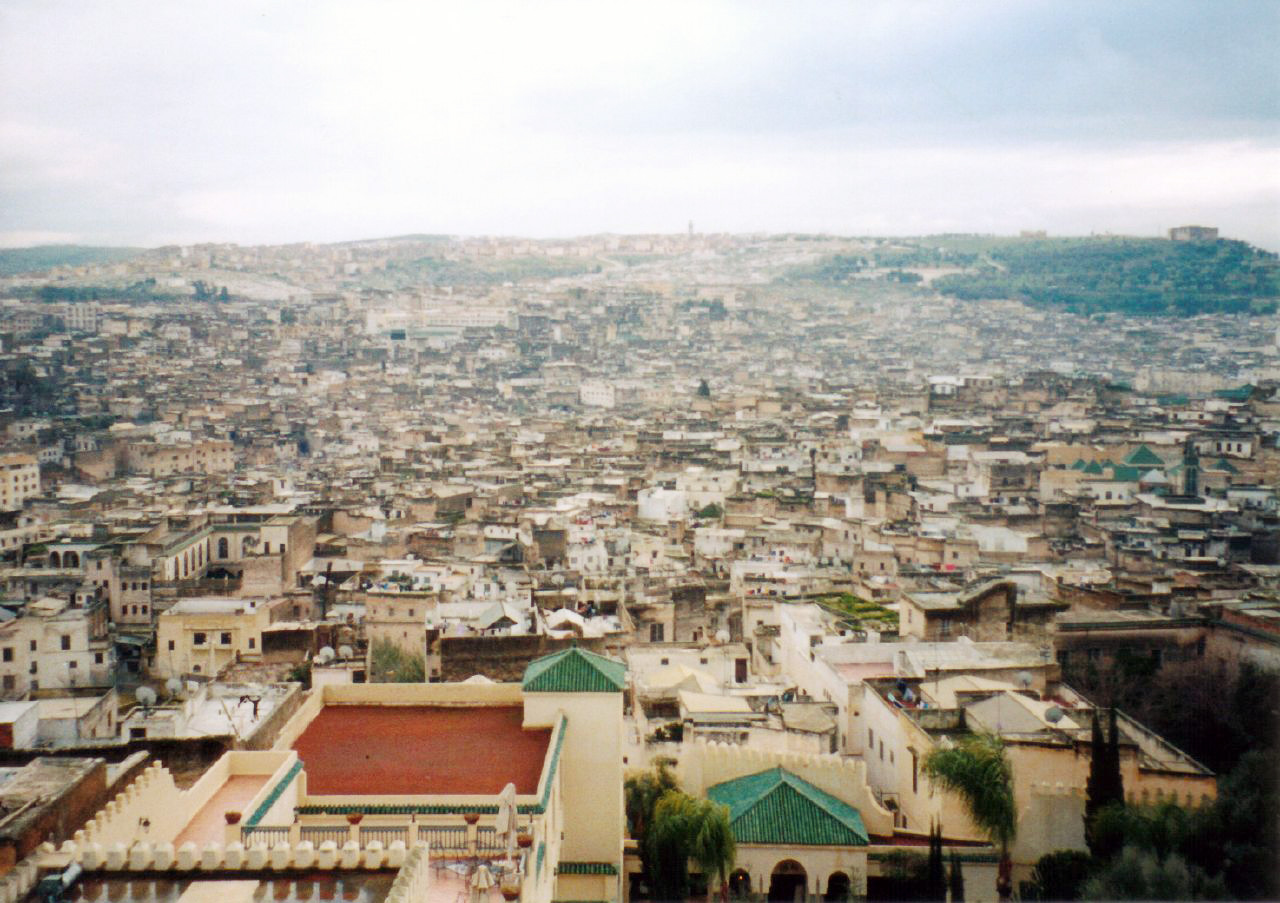 Fes is one of the four so-called "imperial cities" (the others are , and ). It is separated into three parts, (the old, walled city), Fes-Jdid (new Fes, home of the ), and the Ville Nouvelle (the French-created, newest section of Fes). The Medina of Fes el Bali, the largest of the two medinas of Fes, is believed to be the largest contiguous car-free urban area in the world. Fes el Bali is classified as a . The was founded in 859 A.D. and is the oldest continuous operating university in the world.

The city was founded on opposite banks of the Fez River by in 789 ["Jewish and Muslim Dialects of Moroccan Arabic" By Jeffrey M Heath. p. 23.] and his son continued the work in 810. [Fes." Encyclopædia Britannica. 2007. Britannica Concise Encyclopedia. 3 Mar. 2007] The first was the founder of the dynasty, his son was born after he was assassinated. During 's rule the Kairouyine , one of the oldest and largest in , was built, and the associated was founded in 859. [Merriam Webster's Collegiate Encyclopedia. p.574.] emigration to Fes, mostly from after a rebellion which took place in Córdoba in 818 and from Tunisia after another rebellion that took place in 824, gave the city a definite Arab character. 'Adwat Al-Andalus and 'Adwat al-Qarawiyyin, the two main quarters of Fes, were called respectively after the two waves of Arab immigrants to the new city. ["A History of the Maghrib in the Islamic Period" By Jamil Mir'i Abun-Nasr. p. 51.] After (Ali II) came to power, the tribes of Madyuna, Gayatha and Miknasa, which were , formed a common front against the Idrisid and defeated Ali's armies and occupied Fes. , drove the Sufrites out of the city and declared himself Ali's successor. ["A History of the Maghrib in the Islamic Period" By Jamil Mir'i Abun-Nasr. p. 52.]

The city was populated by s from elsewhere in , the , , as well as many s, who had their own quarter, or , in the city.

Fes became the center of the in 1649, and it was a major trading post of the of North Africa. Until the 19th century it was the only source of Fez hats (also known as the "tarboosh"), before they began to be manufactured in and ; originally, the dye for the hats came from a berry that was grown outside the city, known as the Turkish kizziljiek or Greek akenia (Cornus mascula). Fes was also the end of a north-south trading route from .

In 1819–1821 was part of the rebellion which leader was Ibrahim ibn Yazid. In 1832 rebellion , leader Muhammad ibn Tayyib.

Fez was a prime manufacturing location for leather goods such as the .

Fes was the capital of Morocco at various times in the past, the last such period ending in 1912, when most of Morocco came under French control and Rabat was chosen to be the capital of the new colony, a distinction that city retained when Morocco achieved independence in 1956. While many of the original inhabitants of Fes have since emigrated, the quarter has been emptied of its Jewish population ( In 1465, there was large massacre of Jews by Arab riots. [Norman Stillman, The Jews of Arab Lands, 1979, pages 59, 284.] ), and the economy has stagnated, Fes is perhaps the most interesting and picturesque of the Imperial Cities of Morocco. Despite the traditional character of most of the city, there is also a modern section, the Ville Nouvelle, or "New City", which is a bustling commercial center. The popularity of the city has increased since the King of Morocco took a Fassi computer engineer, , as his wife.

Fes is becoming an increasingly popular tourist destination and many non-Moroccans are now restoring traditional houses (riads and dars) as second homes in the Fes medina. The most important monuments in the city are:
* Medersa Bou Inania
*
*
*
*

In the city every year a week-long festival is held of sacred musical traditions from different parts of the world. Performers like Ravi Shankar, Youssou N'Dour and Salif Keita are juxtaposed with less known musical genres such as Japanese Gagaku, Indonesian Gamelan and folk music from Central Asia. The 2007 festival has a new Artistic Director Cherif Khaznadar bringing a new perspective to the programme. The festival was founded in 1994 by the Moroccan scholar and philanthropist Faouzi Skali. It includes a four-day Forum under the rubric "Giving Soul to Globalisation". Politicians, social activists, academics and religious leaders come together in dialogue. This Forum is sponsored by the World Bank.