Origin is an Australian energy company headquartered in Sydney.

Origin Energy was formed in February 2000, as a result of a demerger from the Australian conglomerate Boral Limited, in which the energy business was removed from the building and construction materials business to form the new company.[1]

Between 2001 and 2002, Origin acquired the Victorian electricity retailers Powercor and CitiPower. In 2004, the SEA Gas Pipeline was completed and commissioned, which served to link the Victorian and South Australian gas markets. During this time, Origin obtained 50% interest in the Kupe Gas Field, and managed to obtain Edison Mission Energy's 51.4% interest in New Zealand's Contact Energy.[1]

On 15 December 2010, Origin Energy had announced that it would purchase the retail divisions of Country Energy and Integral Energy from the Government of New South Wales, at a total cost of A$3,250 million[2], as well as entering a GenTrader agreement with Eraring Energy (in which Origin supplies fuel, pays certain charges, and can dispatch and sell electricity output, while Eraring Energy owns, operates and maintains the power stations). The transaction was completed on 1 March 2011.[3].

Origin Energy is active in a number of sectors in the energy business: 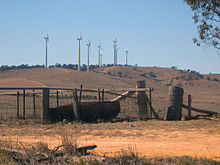 Origin is active in the renewable energy arena. It has spent a number of years developing: