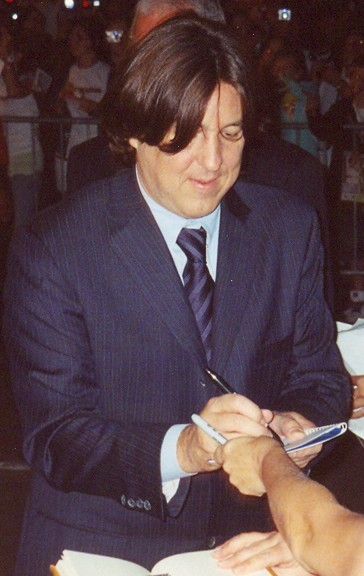 Cameron Bruce Crowe (born , ) is an -winning American and . Before moving into the film industry, Crowe was a contributing editor at "" magazine, for which he still frequently writes.

Crowe has made his mark with character-driven, personal films that have been generally hailed as refreshingly original and void of . Michael Walker in the "" called Crowe "something of a cinematic spokesman for the post-baby boom generation" ["". , .] because his first few films focused on that specific age group, first as ers and then as young adults making their way in the world.

Crowe's debut screenwriting effort, "", grew out of a book he wrote while posing for one year undercover as a student at in San Diego, California, USA. Later, he wrote and directed one more high school saga, "Say Anything", and then "Singles", a story of Seattle twentysomethings that was woven together by a centering on that city's burgeoning scene. Crowe landed his biggest hit, though, with the feel-good "". After this, he was given a green light to go ahead with a pet project, the effort "". Centering on a music on tour with an up-and-coming band, it gave insight to his life as a 15-year-old writer for "Rolling Stone". Also, in late 1999, Crowe released his second book, "Conversations with ", a question and answer session with the legendary director.

Crowe was born in Palm Springs, , USA. His father owned a real estate and phone service business, and his mother, Alice Marie, "was a teacher, activist, and all-around live wire who did skits around the house and would wear a clown suit to school on special occasions."

Recognizing that Crowe was gifted, his mother pushed him to excel. He skipped and two grades in , [K, Carolyn. [http://www.hoagiesgifted.org/grade_skipped.htm "Grades Skipped and Successful"] . "Hoagies Gifted Education Page". Retrieved , ] and by the time he attended Catholic high school, he was quite obviously younger than the other students. To add to his alienation, he was often ill because he suffered from . [ Mai. [http://hoochiecoochiegal.wordpress.com/cameron-crowe-the-legacy-of-the-uncool/ "CAMERON CROWE: The Legacy of the UNCOOL"] . "A Quick Fix of Sanity". Retrieved , .] This made him something of an outcast in the tanned surfer culture of .

To compensate for his lack of social contacts, Crowe began writing for the school newspaper and by age 13 was contributing music reviews for an underground publication, "". He then began corresponding with , who had left the "Door" to become editor at the national rock magazine "", and soon he was also submitting articles to "Creem" as well as "Circus". Crowe graduated from in 1972 at age 15, and on a trip to , met , the editor of "Rolling Stone", who hired him to write for the magazine. He also joined the Rolling Stone staff as a Contributing Editor and then became the Associate Editor. During this time Crowe had a chance to interview some of the most influential musicians at this time, including Bob Dylan, David Bowie, Neil Young, Eric Clapton, and the members of Led Zeppelin. [ [http://www.cameroncrowe.com/about/index.html Cameron Crowe ] ] Crowe was, and still is, "Rolling Stone"'s all-time youngest contributor.

Crowe's first cover story was on . [Crowe, Cameron. [http://www.cameroncrowe.com/eyes_ears/articles/crowe_jrl_allman_bros.html "Eyes and Ears"] . "Cameron Crowe". Retrieved , .] He went on the road with them for three weeks at age 16 and interviewed not only the whole band, but also the entire . On his last night with the group, asked Crowe to his room and told him to bring identification to prove he was not a police officer. Although Crowe showed him his identification, Allman nevertheless confiscated all his tapes. Two days later, the president of the Allman Brothers' label called Crowe to let him know he was returning all the tapes. Allman later said he did not recall the incident.

When "Rolling Stone" moved its offices from the West Coast to New York in 1977, Crowe decided to stay behind. He also felt the excitement of the career was beginning to wane. Crowe appeared in the 1978 film "", but then returned to his writing. Though he would continue to freelance for "Rolling Stone" on and off over the years, he turned his attention to a book.

At 22 and still boyish, Crowe came up with the idea to pose undercover as a high school student and write about his experiences. gave him a contract, and he moved back in with his parents and enrolled as Dave Cameron at in . Reliving the senior year he never had, he made friends and began to fit in. Though he initially planned to include himself in the book, he realized that it would jeopardize his ability to truly capture the essence of the high school experience.

"Fast Times at Ridgemont High: A True Story" came out in 1981. Crowe focused on six main characters: a tough guy, a , a surfer dude, a sexual sophisticate, and a brother and sister. He chronicled their activities in typical teenage settings—at school, at the beach, and at the mall, where many of them held afterschool jobs—and focused on details of their lives that probed into the heart of . This included scenes about and as well as social s and sexual encounters.

Before the book was even released, "Fast Times at Ridgemont High" was for a film. Released in 1982, the movie version lacked a specific plot and featured no major name stars, and the studio did not devote any marketing effort toward it. Nevertheless, it became a due to word of mouth. It owed its popularity in large part to its uncannily realistic portrayal of teenagers.

Though reviews of were mixed, the film ended up launching the careers of some of the previously unknown actors, including , , , , as well as now Oscar-winners (who appeared in the film under his given name, Nicolas Coppola), , and .

Following this success, Crowe wrote the screenplay for 1984's "The Wild Life", the pseudo-sequel to Fast Times at Ridgemont High. Whereas its predecessor followed teenagers' lives in high school, "The Wild Life" traced the lives of several teenagers after high school living in an apartment complex. Filmmaker noticed Crowe's original voice and wanted to work with him. Brooks executive produced Crowe's first directing effort, 1989's "Say Anything...", about a young man pining away for the affections of a beautiful girl. Though it could have easily ended up a formulaic teen love story, "Say Anything..." got a warm reception from critics. They applauded the way Crowe crafted an intriguing and insightful tale that also involved the girl's relationship with her father and how it is threatened when she discovers he is caught up in a shady business deal.

By this point, Crowe was ready to leave teen behind and focus on his peers. His next project, 1992's "Singles", centered on the romantic tangles among a group of six friends in their twenties in Seattle. The film starred as a coffee-bar waitress fawning over an aspiring musician () and and as a couple wavering on whether to commit to each other. Music forms an integral backbone for the script, and the soundtrack became a best seller three months before the release of the film. Much of this was due to repeated delays while studio executives debated how to market it.

"Singles" successfully rode on the heels of Seattle's grunge music boom. During production, bands like Nirvana were not yet national stars, but by the time the soundtrack was released, their song "" had to be cut because it was too costly to buy the rights. Also, before they got big, Crowe signed members of to portray Dillon's fictional band Citizen Dick. Crowe also appeared in this project, appropriately, as a rock journalist at a club. Tim Appelo wrote in "", "With ... an ambling, naturalistic style, Crowe captures the eccentric appeal of a town where espresso carts sprout on every corner and kids in ratty flannel shirts can cut records that make them millionaires." ["". , , p. 46.]

Branching into a new direction, Crowe wrote and directed "", about a high-powered who quits his fast-paced yet uncaring career to begin his own firm. played the title role and , shone as Rod Tidwell, the up-and-coming football player whose , "Show me the money!" became for a time. also appeared as the bookkeeper who leaves her job to follow Maguire into new territory in both work and love. Crowe's earlier efforts brought him recognition, but this would send him soaring onto the . Gooding won a Best Supporting Actor Oscar for his role, and the film was also nominated for Best Picture, Best Screenplay, Best Editing, and Best Actor (for Cruise). Cruise also won his second for his role as Jerry.

In 2000, Crowe tapped his rock-writer roots to write and direct "", about the experiences of a teenage music journalist who goes on the road with an emerging band in the early 1970s. Newcomer starred as William Miller, the baby-faced writer who finds himself immersed in the hard-knock world of sex, drugs, and rock-and-roll, and co-starred as Penny Lane, a prominent groupie, or, as the film refers to her, a "Band-Aid." She is based on a real person, also known as (sometimes Pennie Trumble), who headed a group of young female music fans known as the . Digging into his most personal memories, Crowe used a composite of the bands he had known to come up with Stillwater, the emerging act that welcomes the young journalist into its sphere, then becomes wary of his intentions. Seventies rocker served as a technical consultant on the film.

Crowe's mother figured prominently in the film as well (often admonishing, "Don't take drugs!"), and she even showed up at the film sets to keep an eye on him while he worked. Though he asked her not to bother , who played her character, the two ended up getting along well. Also in the film he showed his sister rebelling and leaving home, and in real life, his mother and sister Cindy did not talk for a decade and were still estranged to a degree when he finished the film. The family reunited when the project was complete.

In addition, Crowe took a copy of the film to for a special screening with Led Zeppelin members and , who provided much of the inspiration for the feuding bandmates. They then granted Crowe the right to use one of their songs on the soundtrack—the first time they had ever consented to this since allowing Crowe to use "Kashmir" in "Fast Times at Ridgemont High"—and also gave him rights to four of their other songs in the movie itself, although they did not grant him the rights to "" for an intended scene. Crowe and his wife, musician Nancy Wilson of Heart, co-wrote three of the five Stillwater songs in the film, and Frampton wrote the other two. Reviews were almost universally positive, and it was nominated for and won a host of film awards, including an Academy Award for Best Original Screenplay for Crowe. Crowe and co-producer also won the Best Compilation Soundtrack Album for a Motion Picture, Television or Other Visual Media for the soundtrack. Despite these accolades, box office returns for the film were disappointing.

He followed "Almost Famous" with "" in 2001, a remake of the Spanish thriller "". Starring and (from the original cast), the film received mixed reviews but still managed to gross $100.6 million at the US box office, making it his second highest grossing directorial effort behind only "Jerry Maguire."

He returned in 2005, with "Elizabethtown", which again opened to mixed reviews, [ [http://www.rottentomatoes.com/m/elizabethtown/ Elizabethtown Movie Reviews, Pictures - Rotten Tomatoes ] ] scoring 45 on , the same as his previous effort, "Vanilla Sky".

It was announced in early June 2008 that Crowe would be returning to write and direct his as-of-yet-untitled seventh feature film, set to star and and released by . No release date has been specified, but filming is expected to begin in January 2009. [Fleming, Michael and Tatiana Siegel. [http://www.variety.com/article/VR1117987103.html?categoryid=13&cs=1 "Stiller, Witherspoon fly with Crowe"] . "". , .]