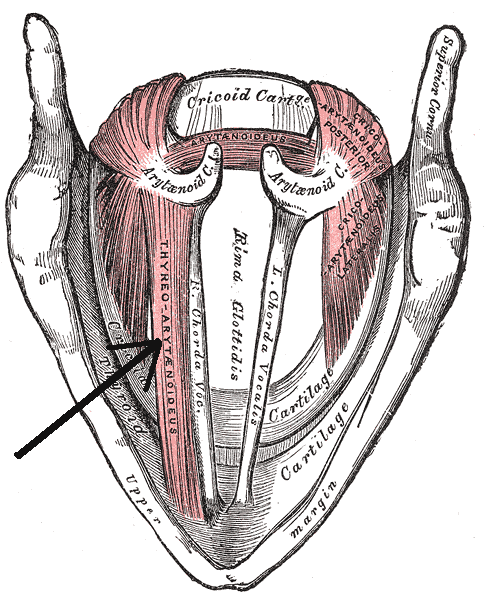 Caption = Muscles of the , seen from above.
Origin = Inner surface of the (anterior aspect)
Insertion = Anterior surface of
Blood =
Nerve = recurrent laryngeal branch of the
Action = helps to adduct the during speech
DorlandsPre = m_22
DorlandsSuf = 12551138
The Thyroarytenoid is a broad, thin, muscle which lies parallel with and lateral to the , and supports the wall of the ventricle and its appendix.

It arises in front from the lower half of the angle of the , and from the .

Its fibers pass backward and lateralward, to be inserted into the base and anterior surface of the arytenoid cartilage.

The lower and deeper fibers of the muscle can be differentiated as a triangular band which is inserted into the vocal process of the arytenoid cartilage, and into the adjacent portion of its anterior surface; it is termed the "Vocalis", and lies parallel with the , to which it is adherent. [eMedicineDictionary|Vocalis+muscle]

A considerable number of the fibers of the Thyreoarytænoideus are prolonged into the , where some of them become lost, while others are continued to the margin of the epiglottis. They have received a distinctive name, "Thyreoepiglotticus" or "Thyroepiglottic", and are sometimes described as a separate muscle. [eMedicineDictionary|Thyroepiglottic+muscle]

A few fibers extend along the wall of the ventricle from the lateral wall of the e to the side of the epiglottis and constitute the "Ventricularis" muscle.

The Thyreoarytœnoidei, consisting of two parts having different attachments and different directions, are rather complicated as regards their action.

Their main use is to draw the arytenoid cartilages forward toward the thyroid, and thus relax and shorten the vocal folds.

But, owing to the connection of the deeper portion with the vocal fold, this part, if acting separately, is supposed to modify its elasticity and tension, while the lateral portion rotates the arytenoid cartilage inward, and thus narrows the rima glottidis by bringing the two vocal folds together.