In electronics, diode modelling refers to the mathematical models used to approximate the actual behavior of real diodes to enable calculations and circuit analysis. A diode's I-V curve is nonlinear (it is well described by the Shockley diode law). This nonlinearity complicates calculations in circuits involving diodes, so simpler models are often required.

This article discusses the modelling of p-n junction diodes, but the techniques may be generalized to other solid state diodes.

The Shockley diode equation relates the diode current I of a p-n junction diode to the diode voltage VD. This relationship is the diode I-V characteristic:

where IS is the saturation current or scale current of the diode (the magnitude of the current that flows for negative VD in excess of a few VT, typically 10−12 A). The scale current is proportional to the diode area. Continuing with the symbols: VT is the thermal voltage (kT / q, about 26 mV at normal temperatures), and n is known as the diode ideality factor (for silicon diodes n is approximately 1 to 2).

the formula can be simplified to:

This expression is, however, only an approximation of a more complex I-V characteristic. Its applicability is particularly limited in case of ultrashallow junctions, for which better analytical models exist.[1]

To illustrate the complications in using this law, consider the problem of finding the voltage across the diode in Figure 1. 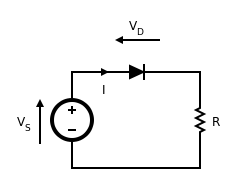 These two equations determine the diode current and the diode voltage. To solve these two equations, we could substitute the current I from the second equation into the first equation, and then try to rearrange the resulting equation to get VD in terms of VS. A difficulty with this method is that the diode law is nonlinear. Nonetheless, a formula expressing I directly in terms of VS without involving VD can be obtained using the Lambert W-function, which is the inverse function of f(w) = wew, that is, w = W(f). This solution is discussed next.

An explicit expression for the diode current can be obtained in terms of the Lambert W-function (also called the Omega function). A guide to these manipulations follows. A new variable w is introduced as

and VD = VS − IR, rearrangement of the diode law in terms of w becomes

which using the Lambert W-function becomes

Once the current is determined, the diode voltage can be found using either of the other equations.

The diode voltage VD can be found in terms of VS for any particular set of values by an iterative method using a calculator or computer [2] The diode law is rearranged by dividing by IS, and adding 1. The diode law becomes

By taking natural logarithms of both sides the exponential is removed, and the equation becomes

For any I, this equation determines VD. However, I also must satisfy the Kirchhoff's law equation, given above. This expression is substituted for I to obtain

The voltage of the source VS is a known given value, but VD is on both sides of the equation, which forces an iterative solution: a starting value for VD is guessed and put into the right side of the equation. Carrying out the various operations on the right side, we come up with a new value for VD. This new value now is substituted on the right side, and so forth. If this iteration converges the values of VD become closer and closer together as the process continues, and we can stop iteration when the accuracy is sufficient. Once VD is found, I can be found from the Kirchhoff's law equation.

Sometimes an iterative procedure depends critically on the first guess. In this example, almost any first guess will do, say

. Sometimes an iterative procedure does not converge at all: in this problem an iteration based on the exponential function does not converge, and that is why the equations were rearranged to use a logarithm. Finding a convergent iterative formulation is an art, and every problem is different.

Graphical analysis is a simple way to derive a numerical solution to the transcendental equations describing the diode. As with most graphical methods, it has the advantage of easy visualization. By plotting the I-V curves, it is possible to obtain an approximate solution to any arbitrary degree of accuracy. This process is the graphical equivalent of the two previous approaches, which are more amenable to computer implementation.

This method plots the two current-voltage equations on a graph and the point of intersection of the two curves satisfies both equations, giving the value of the current flowing through the circuit and the voltage across the diode. The following figure illustrates such method. 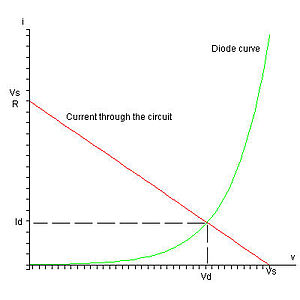 Graphical determination of the operating point through the intersection of the diode characteristic with the resistive load line.

In practice, the graphical method is complicated and impractical for complex circuits. Another method of modelling a diode is called piecewise linear (PWL) modelling. In mathematics, this means taking a function and breaking it down into several linear segments. This method is used to approximate the diode characteristic curve as a series of linear segments. The real diode is modeled as 3 components in series: an ideal diode, a voltage source and a resistor. The figure below shows a real diode I-V curve being approximated by a two-segment piecewise linear model. Typically the sloped line segment would be chosen tangent to the diode curve at the Q-point. Then the slope of this line is given by the reciprocal of the small-signal resistance of the diode at the Q-point. 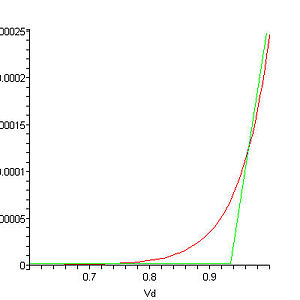 A piecewise linear approximation of the diode characteristic.

Firstly, let us consider a mathematically idealized diode. In such an ideal diode, if the diode is reverse biased, the current flowing through it is zero. This ideal diode starts conducting at 0 V and for any positive voltage an infinite current flows and the diode acts like a short circuit. The I-V characteristics of an ideal diode are shown below: 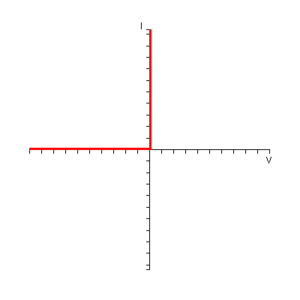 I-V characteristic of an ideal diode.

Now let us consider the case when we add a voltage source in series with the diode in the form shown below:

When forward biased, the ideal diode is simply a short circuit and when reverse biased, an open circuit. If the anode of the diode is connected to 0 V, the voltage at the cathode will be at Vt and so the potential at the cathode will be greater than the potential at the anode and the diode will be reverse biased. In order to get the diode to conduct, the voltage at the anode will need to be taken to Vt. This circuit approximates the cut-in voltage present in real diodes. The combined I-V characteristic of this circuit is shown below: 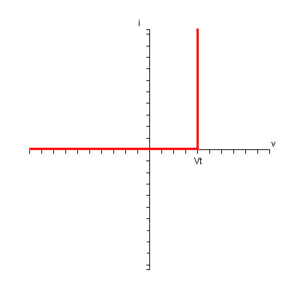 I-V characteristic of and ideal diode with a series voltage source.

The Shockley diode model can be used to predict the approximate value of Vt.

Typical values of the saturation current are:

, its value varies very little for a big variation of the ratio. The use of base 10 logarithms makes it easier to think in orders of magnitude.

The last thing needed is a resistor to limit the current, as shown below:

Ideal diode with a series voltage source and resistor.

The I-V characteristic of the final circuit looks like this: 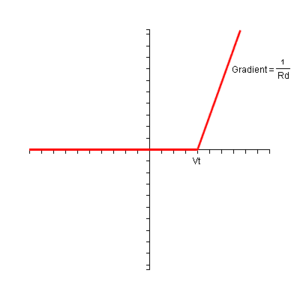 I-V characteristic of an ideal diode with a series voltage source and resistor. 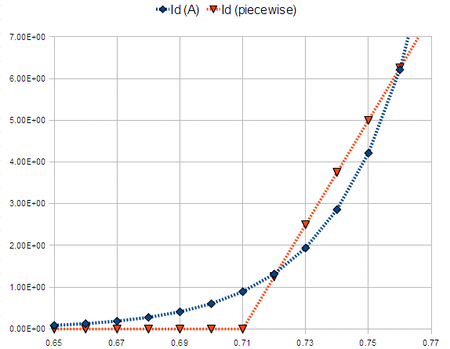 When more accuracy is desired in modeling the diode's turn-on characteristic, the model can be enhanced by doubling-up the standard PWL-model. This model uses two piecewise-linear diodes in parallel, as a way to model a single diode more accurately. 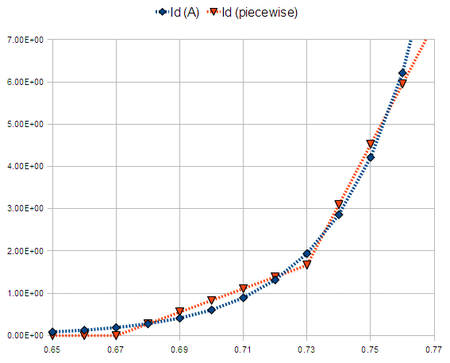 Plot of the I-V Characteristic of this model (marked by red-triangles), as compared to the standard Shockley-diode model (marked by blue-diamonds). The Shockley parameters are Is=1e-12A, Vt=0.0258v

Using the Shockley equation, the small-signal diode resistance rD of the diode can be derived about some operating point (Q-point) where the DC bias current is IQ and the Q-point applied voltage is VQ.[4] To begin, the diode small-signal conductance gD is found, that is, the change in current in the diode caused by a small change in voltage across the diode, divided by this voltage change, namely:

The latter approximation assumes that the bias current IQ is large enough so that the factor of 1 in the parentheses of the Shockley diode equation can be ignored. This approximation is accurate even at rather small voltages, because the thermal voltage

at 300K, so VQ / VT tends to be large, meaning that the exponential is very large.

where τF is the forward transit time of charge carriers:[4] The first term in the charge is the charge in transit across the diode when the current IQ flows. The second term is the charge stored in the junction itself when it is viewed as a simple capacitor; that is, as a pair of electrodes with opposite charges on them. It is the charge stored on the diode by virtue of simply having a voltage across it, regardless of any current it conducts.

In a similar fashion as before, the diode capacitance is the change in diode charge with diode voltage: