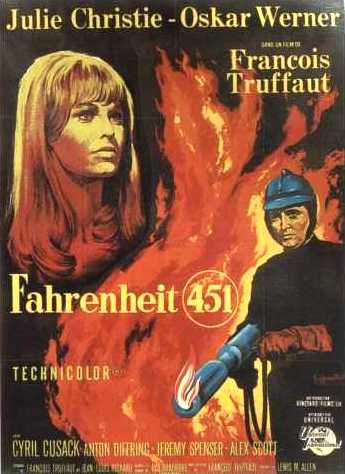 According to Bradbury the novel is not about but about how destroys interest in reading literature. [Boyle Johnston, Amy E. [http://www.laweekly.com/news/news/ray-bradbury-fahrenheit-451-misinterpreted/16524/ "Ray Bradbury: Fahrenheit the monster51 Misinterpreted"] , "LA Weekly", May 30, 2007.] The central character, , is employed as a "fireman" (which, in this case, means "book burner"). 451 degrees Fahrenheit (about 233°C) is stated as "The temperature at which book-paper catches fire, and burns ...". It was directed by and was his only English-language film.

The film starred as Montag and who was nominated for a award for the dual roles of Linda (Mildred) Montag and Clarisse; having long red and short blonde hair respectively and being photographed through different coloured filters. Funding for the film became available when both Christie and Werner, both in popular films at the time, became interested in the project.

The film was first European production that was followed by "".

Deviations from the novel

The movie differed somewhat from the novel.

*Clarisse survives throughout the film and accompanies Montag when he leaves the city.
*The role played by Faber is reduced significantly, appearing only briefly in one scene as an old man who is searched for books in a park as the cinematography surrounds him with black borders.
*The book Montag secretly takes home is changed from the in the novel to a book on in the film.
*The obsession with fast and often fatal driving that permeates the novel is nowhere in the film. Only three automobiles are seen in the film; a Jaguar S-Type, a Imp van, and 's red Excalibur .
*Once Montag begins reading, the machines of his society (represented by the Mechanical Hound in the book) turn against him. In the film this is represented by his being unable to go "up" the and the door of his home no longer opening automatically.
*The nuclear war in the book is absent, though one of Linda's friends talks about her husband being called up by the military.
*The film adds a pursuit of Montag with s and an attack from a machine gun firing that is televised.

Bradbury has said that Truffaut "captured the soul and essence of the book," although he disliked the double omission of Faber and the Mechanical Hound.Fact|date=August 2008

The film was shot at in , with the exterior scene taken at the French test track, in Châteneuf-sur-Loire near , (since dismantled). The film featured the Alton housing estate in , South London and also Edgcumbe Park in , Berkshire. The final scene of the Book People was filmed in a rare and unexpected snowstorm.

The production work was done in French, as Truffaut spoke virtually no English, but co-wrote the screenplay with . Truffaut expressed disappointment with the often stilted and unnatural English-language dialogue. He was much happier with the version that was dubbed into French.

To provide a taste of what life is like in a non-literate culture, the opening credits are spoken rather than being displayed in type.

did costumes and production design whilst did art direction.

"Note:" According to the book "Bradbury: An Illustrated Life", neither Bradbury nor Truffaut chose the books that appear in the movie. The DVD commentary suggests that many or all of the books used came from Truffaut's personal library. One of the books, though barely visible, is "Fahrenheit 451" itself.

According to an introduction by to a CD of a rerecording of the film score by William Stromberg conducting the Bradbury had suggested to Truffaut. Bradbury had visited the set of "" meeting both and Herrmann before Herrmann left the film. When Truffaut contacted Bradbury for a conference about his book, Bradbury recommended Herrmann as Bradbury knew Truffaut had written a detailed book about Hitchcock. [Bradbury, Ray "Bernard Herrmann and Fahrenheit 451" liner notes for CD 5 June 2007]

Herrmann used a score of only s, , , , , and . As with "Torn Curtain", Herrmann refused the studio's request to do a title song.