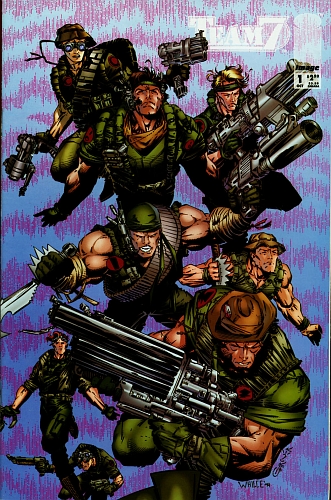 "Team 7" is the name of a team appearing in titles published by . The team has appeared in 3 self-titled miniseries: "Team 7", "Team 7: Objective Hell" and "Team 7: Dead Reckoning". The first 5-issue also involved members of Team 7. The team's members have played a major role throughout the Wildstorm Universe.

Team 7 was officially the seventh incarnation of a group of military specialists gathered from various government forces. (Recently a has been revealed though, making Team 7 the group's eighth incarnation.)

Team 7 took its orders from Miles Craven, director of International Operations. Craven wanted his own army of superhumans, and therefore dropped a chemical known as the "Gen-factor" on the members of Team 7 during a (suicide) mission. When they awoke from their Gen-factor induced comas, Team 7 was told that the enemy had dropped a chemical weapon on them. As a result of the Gen-factor, Team 7 (except for Michael Cray) started to develop superhuman powers. It would be years before Cray himself would develop similar abilities. Team 7 member Cole Cash distrusted Craven and suspected that he was behind the experiment. Several members of Team 7 were unable to cope with their new powers and went mad or committed suicide. At least one had to be shot during a subsequent mission, as he was basking in the glory of his ability to make people kill themselves. As a test, Craven dropped a nuclear weapon on Team 7. The members survived through co-operation and went into hiding. ["Team 7" #1-4 (October 1994-February 1995)]

Some time later, Team 7 returned to work for I.O. and were sent to destroy a cache of nuclear weapons from before the could get them. The team succeeded, but learned that a pair of Soviet superhumans were trailing them. They battled them, but they turned out to be too strong and Jackson Dane went into a coma. The Cambodian blind girl X'ing X'iang, who had displayed superhuman mental powers before, overpowered one of the Soviet agents, while Michael Cray shot the other one. The team returned to the US and took X'ing X'iang with them. ["Team 7: Objective Hell" #1-3 (May 1995-July 1995)]

Years later, the Team 7 members were ordered to bring in the Soviet scientist, Dbovchek. Cole Cash entered the Soviet Union on his own to find out more about Dbovchek, while the rest of the team went on the mission. Dbovchek turned out to be one of the main scientists behind the Russian psionic program. The mission turned out to be a failure; Dbovchek was killed and Cash was captured. Cash discovers that his mental powers were waning, but John Lynch saves him.

Back in the US, Jackson Dane awoke from his coma, under the influence of International Operations. Dane's powers turned out to be far stronger than the rest of Team 7 combined, but Cray brought in X'ing X'iang who freed Dane. She found out through Dane that Miles Craven had become interested in the children of Team 7, so most Team 7 members took their families and went into hiding. This would turn out to be the end of Team 7, though most members would stay in contact and occasionally reunite. ["Team 7: Dead Reckoning" #1-4 (January 1996-April 1996)]

Jackson Dane would lead a new Team 7 years later. This team would feature in the series "".

Code-named Topkick, team leader Lynch was the former head of I.O.'s Black Razors. He starred in and Sleeper.Father of Burnout of .

His Team 7 identification mark was a circle with a stripe upwards painted over his left eye.

Code-named Backlash, Slayton was a member of , , Team 7, and Stormwatch, as well as his own . He starred in 's Stormwatch, Backlash, and .Father of Jet (formerly Crimson of Wildcore). Father of Aries.

His Team 7 identification mark was a trapezoid, pointed downwards painted over his left eye.

Code-named Dead Eye (though later taking on the code name Grifter), Cash has been a figurehead of the Wildstorm Universe, being an expert with a gun, holding Coda training, and having psi powers. Grifter has starred in many comics such as WildC.A.T.S., Sleeper, Point Blank, and two of his own solo titles.

His Team 7 identification mark was the same symbol as later appeared on his mask. The mark was over his left eye.

Code-named . Starred in his own self-titled series. Deceased, though a 'clone' of him was created. This 'clone' is female and African-American though.The father of Sublime of .

His Team 7 identification mark were two parallel strips over his left and right eye, going from his hairline to his chin.

Code-named Arclight, Dane starred in the comic , which was about a new incarnation of Team 7. Dane will star in the upcoming Wetworks series.

His Team 7 identification mark was a lightning bolt over his left eye.

His Team 7 identification mark was a crescent moon, waxing, over his right eye.

Code-named Wraparound. Faked his death, only to be revealed alive years later. Father of Threshold and Bliss of .Father of of .

Code-named Slaphammer. Died in the pages of .Father of and Freefall of Gen¹³.

*Berckmann, first name unknown. Died from the side effects of Gen-factor exposure.
*Robert Diaz. Was abandoned on a mission and joined the Kindred. Nicknamed Bloodmoon.
*Andrew Johnson. Shot by Cole Cash for abusing his powers in sadistic ways.
*Richard MacNamara. Code-named Boloround. Commits suicide after exposure to the Gen-factor.
*Lucius Morgan. Currently known as the Pirate King. Exact circumstances of his time with Team 7 are unknown, but he was not part when the team was exposed to the Gen-Factor.
*Jack Rhodes. Nicknamed Cyberjack, Rhodes was severely wounded before Team 7's exposure to the Gen-factor.